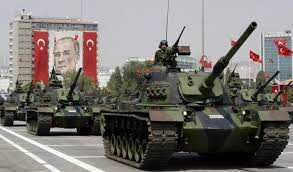 Turkey could fall foul of Nato’s “requirement with respect to democracy” if it fails to uphold the rule of law in the wake of an attempted coup, the US Secretary of State John Kerry has warned.

The Turkish government’s response to the failed coup has alarmed both the US and the EU, after it described the plotters as a “cancer” which had to be “cleansed” from public institutions.

State Department says Nato is monitoring how the Turkish government responds to the failed coup. Members of the alliance are required to ‘uphold democracy, including tolerating diversity’
A State Department spokesman has suggested it is “too soon to say” if a clampdown by the Erdogan government could jeopardise Turkey’s membership of Nato.

But Nato’s leadership has made it clear that a commitment to “uphold democracy, including tolerating diversity” is one of the five core requirements for members of the alliance.

Around 8,000 police officers have been suspended across Turkey following the failed coup, with more than 6,000 people in the army, the judiciary and other state bodies arrested as part of President Recep Tayyip Erdogan’s response to Friday’s events.

World leaders call for ‘restraint and moderation’ in Turkey
Erdogan has said the people who attempted the coup “must pay,” and that the government will consider introducing the death penalty for people believed to have committed traitorous acts against the state.

At a joint news conference with EU foreign policy chief Federica Mogherini, US Secretary of State John Kerry said that America stands “squarely on the side of the elected leadership in Turkey,” but that “we urge the government of Turkey to uphold the highest standards of respect for the nation’s democratic institutions and the rule of law”.

While Ms Mogherini warned that countries that allow the death penalty cannot join the European Union, Mr Kerry added that “Nato also has a requirement with respect to democracy,” The Washington Post reported.

The US “will certainly support bringing the perpetrators of the coup to justice,” he said, “but we also caution against a reach that goes beyond that and stress the importance of the democratic rule being upheld”.

The Turkish foreign minister Mevlut Cavusoglu has insisted that President Erdogan’s government will respect democracy, while Mr Kerry responded that Nato would “measure” its actions. “Obviously a lot of people have been arrested and arrested very quickly,” Mr Kerry added, “The level of vigilance and scrutiny is obviously going to be significant in the days ahead. Hopefully we can work in a constructive way that prevents backsliding.”

Ms Mogherini said the incident “is no excuse to take the country away from fundamental rights and the rule of law, and we will be extremely vigilant on that.”

The pair spoke after a meeting in Brussels that also included the bloc’s 28 foreign ministers.

US officials have since denied Mr Kerry’s comments on Nato were a warning to Turkey. State Department spokesman John Kirby told the Washington Post that Nato will be watching Turkey carefully, but added it was “too soon to say” its membership was at risk.