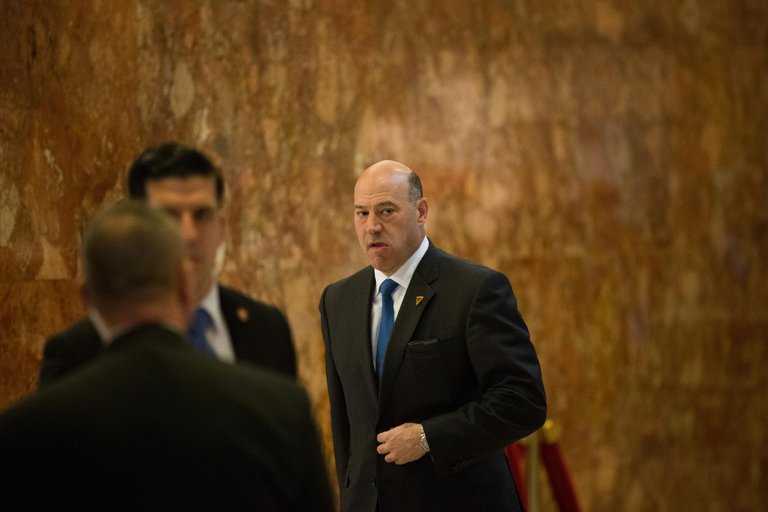 It would be the first of many such meetings with President-elect Donald J. Trump.

During that sit-down, on Nov. 29, Mr. Cohn briefed Mr. Trump on what he regarded as the chief hurdle to expanding the economy, according to people who were briefed on the discussion: a stronger dollar, which would undermine efforts to create jobs.

Mr. Cohn also argued that the bold infrastructure projects that Mr. Trump envisioned would need private-industry partners, those people said, in order to avoid weighing down the government with costs.

That got Mr. Trump’s attention.

The president-elect turned to the other people in the room — his son-in-law, Jared Kushner; his chief strategist, Stephen K. Bannon; his chief of staff, Reince Priebus; and Steven T. Mnuchin, his campaign’s chief fund-raiser and Mr. Trump’s nominee to be Treasury secretary — surprised that his infrastructure ideas had such a potential downside.

A few weeks after the election, Gary Cohn, the president of Goldman Sachs, was summoned to Trump Tower for a discussion about the economy. It would be the first of many such meetings with President-elect Donald J. Trump.

During that sit-down, on Nov. 29, Mr. Cohn briefed Mr. Trump on what he regarded as the chief hurdle to expanding the economy, according to people who were briefed on the discussion: a stronger dollar, which would undermine efforts to create jobs.

Mr. Cohn also argued that the bold infrastructure projects that Mr. Trump envisioned would need private-industry partners, those people said, in order to avoid weighing down the government with costs.

That got Mr. Trump’s attention.

The president-elect turned to the other people in the room — his son-in-law, Jared Kushner; his chief strategist, Stephen K. Bannon; his chief of staff, Reince Priebus; and Steven T. Mnuchin, his campaign’s chief fund-raiser and Mr. Trump’s nominee to be Treasury secretary — surprised that his infrastructure ideas had such a potential downside.

“Is this true?” Mr. Trump asked the group, according to those people. Heads nodded. “Why did I have to wait to have this guy tell me?” he demanded.

It would not be the only time Mr. Cohn was a lonely voice in Mr. Trump’s inner sanctum. Two and a half months after that initial meeting, with key economic posts in the White House and cabinet still vacant, he has become the go-to figure on matters related to jobs, business and growth. He resigned from his position at Goldman in December to become director of the president’s National Economic Council.

People with knowledge of his new role said that Mr. Cohn, a Democrat, is summoned to the Oval Office for impromptu meetings with the president up to five times a day — and that he reaches out to the president on other occasions. Mr. Trump, said one of these people, is oriented toward the bottom line when it comes to shaping policy, often asking Mr. Cohn, “What do you want to do?”

The direct access to the president has been crucial as Mr. Cohn navigates a White House where Mr. Bannon and the policy director Stephen Miller are power brokers whose worldviews differ from his, and where unexpected presidential complaints, broadcast on Twitter, can significantly recalibrate the day’s agenda.

Topping Mr. Cohn’s current to-do list: corporate and individual tax reforms, to be carried out at the same time; improvements to infrastructure to create new jobs; and regulatory relief in general.

He is also studying how to revamp the Affordable Care Act, which Mr. Trump vowed during the campaign to repeal — a promise that is proving to be more complicated to keep than he had expected.

Mr. Cohn is working with a health care specialist and consulting with House Republicans: Speaker Paul D. Ryan; Kevin McCarthy, the majority leader; and Jeb Hensarling, chairman of the Financial Services Committee. Mr. Cohn is determining which aspects of the act may be worth keeping (allowing people to stay on their parents’ plans until age 26 and mandating coverage of people with pre-existing conditions) and which may not (allowing people to sign up for health insurance outside of the typical enrollment periods).

Orin Snyder, a corporate litigator and longtime friend of Mr. Cohn’s who speaks to him regularly, said, “He is working around the clock, energized and focused like a laser beam on developing the best plan for implementing the president’s economic agenda.”

This account of Mr. Cohn’s role in economic matters, amid the tumultuous first three weeks of the Trump administration, is based on interviews with four people who have observed or been briefed on his transition from Goldman to the White House and his early work in the administration.

Mr. Trump has already vowed to dismantle the Dodd-Frank Act, the financial regulation law that was passed in 2010, and has ordered a reassessment of an Obama-era rule requiring financial advisers to act in the best interest of their clients. The efforts have helped push up stock markets, particularly shares of financial companies.

They have also generated outrage in some quarters. “The way I see this, there was a devastating financial crisis just over eight years ago,” Senator Elizabeth Warren, Democrat of Massachusetts, said. “Goldman Sachs was at the heart of that crisis. The idea that the president is now going to turn over the country’s economic policy to a senior Goldman executive turns my stomach.”

It is not just that Mr. Cohn, 56, has a prominent role in economic policy; he is one of the few senior administration officials addressing those issues on the job right now. Questions of job creation and financial regulation might fall within the purview of not only the National Economic Council but also of the Council of Economic Advisers — a panel of experts that has historically operated within the White House — and the Treasury secretary. But Mr. Trump indicated on Wednesday that the vacant position of council chairman would not be cabinet-level, and Mr. Mnuchin has yet to be confirmed.

Mr. Cohn collaborates frequently with Mr. Kushner, who is now a senior adviser to Mr. Trump. Along with Mr. Kushner and his wife, Ivanka Trump, Mr. Cohn recently helped persuade the president not to pursue an executive order that would have rolled back rights for gay, lesbian, bisexual and transgender people.

And when Mr. Trump lashes out publicly at a major company or orders a travel ban that inspires wide criticism, from Silicon Valley to Goldman, Mr. Cohn hunkers down on the policy work, people who have observed him said.

Mr. Cohn was not looking for a new job when he first encountered Mr. Kushner last year at the behest of Michael Ovitz, the former Hollywood agent who is a mutual friend, according to two people with knowledge of that meeting. Despite the generational divide — Mr. Kushner is 36 — the men hit it off, the two people said, and after Mr. Trump’s upset victory on Nov. 8, a meeting with Mr. Cohn was quickly arranged.

After the initial get-together at Trump Tower, at which a range of jobs were discussed, including energy secretary and director of the Office of Management and Budget, additional talks between Mr. Trump and Mr. Cohn quickly followed, a person who was briefed on those discussions said.

On Dec. 12, Mr. Cohn’s new post as National Economic Council director was announced, touching off a rapid career transition that included making extensive financial disclosures, preparing to sell or forfeit an enormous amount of Goldman stock and walling himself off from pending matters that could have posed a conflict of interest.

Still, Mr. Cohn’s 26-year career at Goldman, where he performed an array of jobs, including trading commodities, running mortgages and eventually overseeing day-to-day operations, ended with a remarkable windfall: cash and stock valued at $285 million.

Ms. Warren and other critics, who have raised questions about Mr. Cohn’s communications with Goldman employees on policy matters since joining the government, find that sum objectionable.

A White House spokeswoman had no immediate comment, and a spokesman for Goldman said in a statement that the firm had not been involved in formulating any of the president’s executive orders.

Since relocating to Washington, Mr. Cohn has lived in a hotel near the White House, traveling by cab early each day to his new office in time for an 8 a.m. senior staff meeting with Mr. Priebus. At the urging of Dina H. Powell, a former Goldman colleague who is now a presidential adviser, Mr. Cohn hired Jeremy Katz, a former George W. Bush aide, as his deputy. Kenneth Juster, another Bush administration veteran who had become a partner at the private-equity firm Warburg Pincus, was put in charge of international economic affairs.

Business interests have been central in Mr. Trump’s early governing, and he has met with chief executives from, among others, Dow Chemical, Tesla and Under Armour to discuss job creation and border taxes. He has also met with the heads of food corporations, financial-services companies and airlines. Mr. Cohn was present for most of those meetings.

On taxes, regulations and health care initiatives, “I give them an A-plus,” said Larry Kudlow, an informal adviser to the Trump campaign who was briefly considered for the chairmanship of the Council of Economic Advisers. “Regarding trade and the dollar, I’m giving them an incomplete.”

Corporate tax reform should be on an even faster trajectory, Mr. Kudlow added. “The longer you wait on that, the longer economic activity will be postponed. Twenty seventeen could turn out to be a difficult economic and market year, until you get it done.”