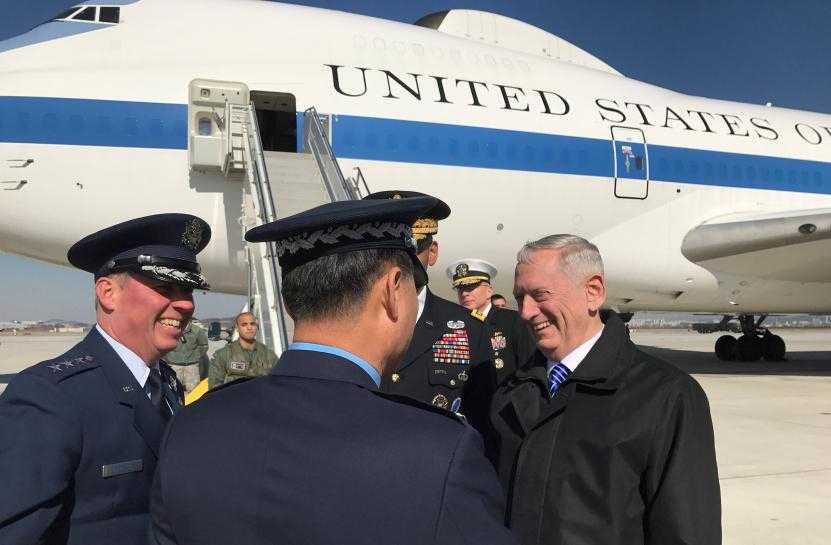 SEOUL U.S. Defense Secretary Jim Mattis said he would sound out ally South Korea on efforts to address North Korea’s nuclear and missile programs as he arrived in Seoul on Thursday, including plans to deploy a U.S.

Mattis’ visit comes amid concern that the North may be readying to test a new ballistic missile, in what could be an early challenge for U.S. President Donald Trump’s administration.

“I will talk to them about THAAD absolutely,” Mattis told reporters shortly before landing, referring to the plans to deploy a Terminal High Altitude Area Defense (THAAD) system in South Korea.

“THAAD is for defense of our ally’s people, of our troops who are committed to their defense.”

South Korea and the United States say the deployment of THAAD is designed to protect against North Korea’s growing nuclear and ballistic capabilities, which have been advancing despite years of efforts by the international community.

North Korea, which regularly threatens to destroy South Korea and its main ally, the United States, conducted more than 20 missile tests last year, as well as two nuclear tests, in defiance of UN resolutions and sanctions.

The North appears to have also restarted operation of a reactor at its main Yongbyon nuclear facility that produces plutonium that can be used for its nuclear weapons program, according to a U.S. think tank, 38 North.

China has objected to THAAD, saying it will destabilize the regional security balance, leading to calls from some South Korean opposition leaders to delay or cancel it.

Mattis, without citing China explicitly, said “no other nation” needed to be concerned about THAAD.

“Were it not for the provocative behavior of North Korea, we would have no need for THAAD out here,” Mattis said.

Mattis’ trip to the region, which also includes a stop in Japan, is his first since becoming Trump’s Pentagon chief and is also the first foreign trip by any of Trump’s cabinet secretaries.

U.S. officials have said the trip is meant to reaffirm ties with South Korea and Japan, U.S. allies hosting nearly 80,000 American troops, and the importance of the region overall.

That U.S. reaffirmation could be critical after Trump appeared to question the cost of such alliances during the election campaign. Trump also jolted the region by pulling Washington out of an Asia-Pacific trade deal that Japan had championed.

Mattis is scheduled to hold talks on Thursday with South Korean Prime Minister Hwang Kyo-ahn, who is serving as acting president after President Park Geun-hye was impeached over a corruption scandal.

He suggested he was coming into a region with an open mind about what might be working – and what might not be – in the strategy to deal with Pyongyang, but declined to speculate until hearing from Seoul.

“I need to talk to them. Strategies are games of give and take and I have to see their view of it,” Mattis said.

“Have we maintained what passes for peace so far? To a degree we have. But we’re not trying to just look at today. We’re looking at today and we’re looking at tomorrow. And I need to see where they view this going right now.”

Trump on Jan. 2 tweeted, “It won’t happen!” about North Korea’s pursuit of a nuclear-tipped ICBM, although his precise meaning was unclear. The Pentagon has said it would not necessarily strike a test-launched ICBM if it did not pose a threat.

Former U.S. officials and other experts have said the United States essentially has two options when it comes to trying to curb North Korea’s fast-expanding nuclear and missile programs – negotiate or take military action.

Neither path offers certain success and the military option is fraught with huge dangers, especially for Japan and South Korea, U.S. allies in close proximity to North Korea.