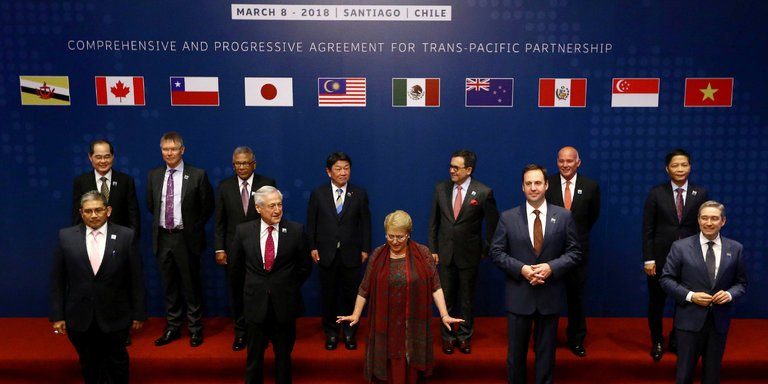 BEIJING — President Trump wants the United States to rejoin the Trans-Pacific Partnership. The other members might not make it so easy.

Officials in Japan, Australia and elsewhere reacted coolly on Friday to Mr. Trump’s remarks that he would be interested in rejoining the trade pact, which includes 11 countries in the Americas and the Asia-Pacific region. Reinstating the United States would probably require intense renegotiation of a trade pact that already took roughly a decade to hammer out. Any concessions, they signaled, would have to come from the American side.

Comparing the multicountry trade agreement to “a glasswork,” Yoshihide Suga, Japan’s chief cabinet secretary, cautioned against any efforts to change it to accommodate Mr. Trump.

“It’s difficult to bring part of the pact and renegotiate it,” he said, calling it a “well-balanced pact” that carefully addressed the needs of the current 11 nations.

“We’ve got a deal” already, said Steven Ciobo, Australia’s trade minister, who added, “I can’t see that all being thrown open to appease the United States.”

An early test of the potential for the United States to rejoin could come as early as next week, when Shinzo Abe, Japan’s prime minister, is to meet with Mr. Trump at his Mar-a-Lago resort in Palm Beach, Fla. Mr. Abe has championed the trade pact.

Mr. Trump’s remarks about the deal, which he once called a “rape of our country,” came Thursday as he faced a growing domestic backlash from corporations, farmers and others over fears that he is igniting a trade war with China, the United States’ largest trading partner. Mr. Trump has warned that he could levy tariffs on $150 billion in Chinese goods, prompting Beijing to threaten retaliatory measures aimed at American soybeans, airplanes and other products.

[Read about President Trump’s reversal on the Trans-Pacific Partnership, which came at a gathering of politicians from farm states that stand to lose from any trade war with China.]

Reviving the old version of the Trans-Pacific Partnership could have advantages for both the current members and the United States. It could be a way to assuage American farmers and businesses hurt by Chinese tariffs by assuring robust markets for American products in countries that signed onto the deal, like Japan, Australia and South Korea. For the current members, it would give the pact a great deal more heft and help position it as an economic counterweight to China, which increasingly dominates the Asia-Pacific region.

But striking a new deal could be extremely difficult. Mr. Trump said in a tweet late Thursday that the deal would have to be renegotiated to include better terms for the United States.

While Mr. Trump did not provide specifics, American trade advisers have signaled some of their concerns.

For example, the United States could seek added protections to make sure Chinese-made goods do not find their way tariff-free into the United States via member countries such as Vietnam. Trump administration officials have expressed concerns that companies could make components in China, then send them to Vietnam to be assembled into final products and shipped to the United States.

Vietnamese officials did not respond to requests for comment on Friday. While Vietnam and China are historic rivals, trade between the two countries has grown in recent years. Frederick Burke, managing partner for Vietnam at the American law firm Baker & McKenzie, said that Vietnamese products contained a lot of Chinese raw materials and components and that determining origin could be difficult. The Vietnamese government, he said, is “very aware of and focused on the issue of circumvention” in trade.

Reaching a compromise could be tough. Many current members of the pact feel they already gave considerable ground to the United States to strike the original deal, particularly in sensitive areas like protections for pharmaceutical companies.

Moreover, they may sense that Mr. Trump’s reversal comes from a position of necessity: In addition to keeping open export markets, rejoining the trade alliance could help limit China’s ability to play the United States off allies like Japan should a full-on trade war break out.

Sheila A. Smith, a Japan expert at the Council on Foreign Relations in Washington, said that the Trump administration may have realized it does not have the leverage it thought to renegotiate a new trade deal with Japan and that embracing the regional pact may be the best fallback.

The Trump administration “could walk right back in with the exact same deal from last year that they walked out of, and claim victory,” said Ms. Smith, who noted that the government of Mr. Abe “has been continuously and quietly encouraging the U.S. administration to take another look” at the pact.

Mr. Suga, the Japanese official, said as much, saying “Japan would like to listen to the U.S.’s view” on embracing the deal.

One lingering question would be how China would react. The pact’s rules were designed in part to challenge China by encouraging members to loosen state support of their economies and relax trade rules — steps Beijing would have to take if it hoped to someday join the pact and enjoy its lower trade barriers.

China is not likely to be troubled by a United States move to join the Trans-Pacific Partnership as long as the Trump administration is doing so for strictly trade reasons, said He Weiwen, a former Commerce Ministry official and trade specialist who is now a senior fellow at the influential Center for China and Globalization in Beijing.

China’s views on regional trade agreements have evolved considerably over the past decade. Chinese businesses now have large numbers of patents that they want to protect from being copied by poorer countries, and this has made China more receptive to agreements that have high intellectual property standards, as the Trans-Pacific Partnership does. China has also been moving to open up its financial services sector to foreign competition, another key feature of the pact.

“The Trans-Pacific Partnership is a good trade pact because it has high standards, and many are compatible with China’s economic reform, which involves opening up,” Mr. He said.

But the Chinese government is more likely to be dismayed if the United States is reconsidering it as part of any revival of the Obama administration’s geopolitical pivot to Asia, or as part of any attempt to isolate China, Mr. He cautioned.

“That’s what we should be careful about,” he said.

Mr. Trump’s comments did not come as a complete surprise to China. The president publicly hinted at an interest in the Trans-Pacific Partnership when he spoke at the World Economic Forum in late January in Davos, Switzerland. Mr. Trump said the United States would negotiate with the 11 members, “either individually, or perhaps as a group, if it is in all of our interests.”

Some current members of the pact greeted Mr. Trump’s comments on Thursday warmly. A spokeswoman for Singapore’s Ministry of Trade and Industry said it welcomed the American interest. “The TPP was designed to be an inclusive agreement, which is open to like-minded countries willing and able to meet its high standards,” the spokeswoman said.

“If the United States genuinely did wish to re-enter, that would trigger another process of engagement and negotiation,” Jacinda Ardern, the prime minister of New Zealand, said on television, adding that she still planned to go forward with the deal as-is. “It’s not just a matter of slotting into an existing deal.”