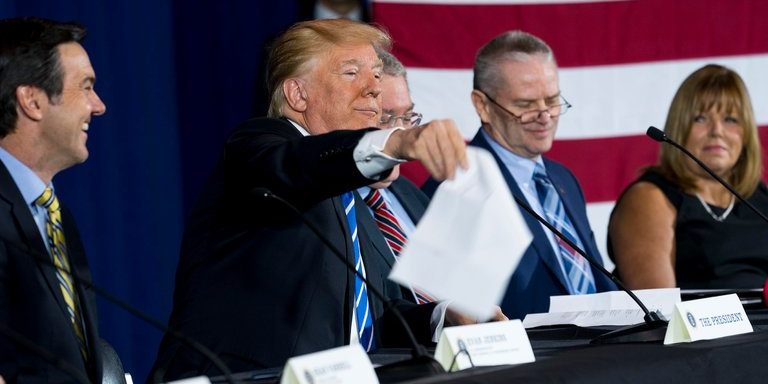 WHITE SULPHUR SPRINGS, W.Va. — President Trump on Thursday lashed out at Democrats for opposing his proposals to fortify the border and toughen immigration laws, accusing his political opponents of embracing dangerous policies to secure immigrant votes.

“This is what the Democrats are doing to you, and they like it because they think they’re going to vote Democrat,” Mr. Trump said, after recounting the terrorist attack in Lower Manhattan last October, in which an Uzbek immigrant killed eight people when he drove a truck onto a pedestrian and bicycle path on the West Side Highway. “They’re doing it for that reason, and other reasons.”

Mr. Trump traveled to West Virginia on Thursday to promote his $1.5 trillion tax overhaul before a friendly audience. But the president grew bored with his prepared remarks after a few moments and returned to the bitter complaints about the nation’s immigration laws that have dominated his attention this week and prompted him on Wednesday to ask governors to deploy the National Guard to the southern border.

“This was going to be my remarks — it would have taken about two minutes, but …” Mr. Trump said, tossing a sheet of paper covered with neat paragraphs of text into the audience. “I’m reading off the first paragraph, I said, ‘This is boring.’ Come on. We have to tell it like it is.”

Mr. Trump opted instead for a lengthy tirade against immigrants and the nation’s immigration laws, including a practice known as “catch and release” in which migrants who present themselves at the border are released from custody to await an immigration hearing to determine whether they should be allowed to remain in the United States.

“We’re toughening up at the border,” Mr. Trump said. “We cannot let people enter our country — we have no idea who they are, what they do, where they came from.”

He boasted that he had described immigrants as rapists when he announced his presidential candidacy, saying that he had recently learned that during the journey north made by a caravan of Honduran migrants, “women are raped at levels they’ve never seen before.”

Mr. Trump also said his administration had cracked down on MS-13, the transnational gang with ties to El Salvador, detailing its brutal methods.

“This is the kind of stuff and crap that we’re allowing into our country, and we can’t do it,” Mr. Trump said.

He also repeated his false claim that millions of people voted illegally in the 2016 election.

Mr. Trump’s remarks drew enthusiastic applause from an audience of about 200 in a state that he won with 68 percent of the vote, his largest margin of victory in the country.

But it also drew rebukes.

“President Trump is insulting American voters by making up lies,” said Jason Kander, a former Democratic candidate for the Senate and now the president of Let America Vote, a voting rights group. “President Trump’s lies cause the American electorate to lose faith in our system of elections and take our elections less seriously, which is one of his goals. If people don’t trust that their vote counts, then they won’t vote.”

The round table on taxes was a lovefest for the president, in which attendees took turns praising him and recounting the ways in which the tax measure and Mr. Trump’s agenda had helped them and their families.

“This is a big deal for our family,” Jessica Hodge said, choking back tears after her husband told Mr. Trump that their family had saved $2,417 because of the tax cut. He said they planned to spend it on a kitchen renovation.

The president grinned and nodded his approval.

Evan Jenkins, a West Virginia House member, and Patrick Morrisey, the state’s attorney general — who are competing in a May primary to run for the Senate — flanked Mr. Trump and took turns showering him with praise.

Mr. Morrisey chimed in. “Your policies really have made an incredible difference in our state,” he said, adding, “We had the bull’s-eye on us until you got here, so thank you for that.”

As he wrapped up the event, Mr. Trump asked the audience to weigh in on which man should win the primary next month.

The applause were loudest for Mr. Jenkins, who represents the district that White Sulphur Springs is in.

“We’re very proud of the tax cut,” Mr. Trump said, as he got up to depart. “A lot of people are being helped so much.”