Trump summit with Mexico’s Pena Nieto still on, ‘for now’ 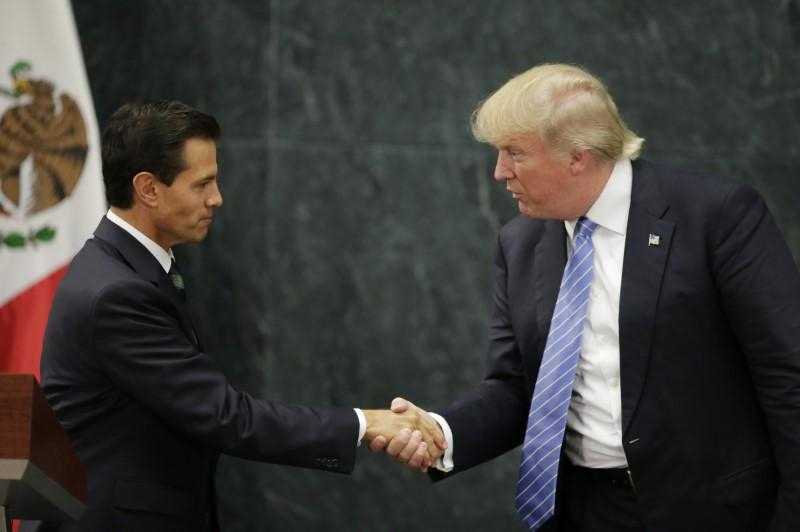 MEXICO CITY, A summit between U.S. President Donald Trump and his Mexican counterpart Enrique Pena Nieto next week is still on “for now”, Mexico’s foreign minister said on Wednesday, despite pressure at home to scrap it over objections to a border wall.

Earlier in the day Trump signed new executive orders, including one authorizing a wall on the U.S. southern border, just as a Mexican delegation led by Foreign Minister Luis Videgaray arrived at the White House for talks.

The timing caused outrage in Mexico, with prominent politicians and many on social media seeing at as a deliberate snub to the government’s efforts to engage with Trump, who has for months used Mexico as a political punching bag.

“The meeting between the two presidents in Washington next Tuesday is still confirmed,” Videgaray said. “The meeting, for now, is going forward,” he said.

President Enrique Pena Nieto said in a recorded message that he “disapproves” of Trump’s order on the border wall and in response ordered Mexico’s fifty U.S. consuls to extend legal help to citizens living in the United States.

“Wherever there is a Mexican migrant who needs our help, we should be there,” he said.

One source with knowledge of the government’s thinking said the measure was intended to clog U.S. immigration courts with legal objections to deportations. The courts already face a backlog of half a million cases.

Videgaray said some “positive elements” resulted from the talks, including a blunt acknowledgment by Trump of the U.S. role in supplying illegal arms to Mexico. He also referred to Trump’s public comments that he wanted to see a strong Mexican economy.

Videgaray said it had been “a day of contrasts,” adding that his delegation’s talks with senior White House aides lasted eight hours.

Speaking as Trump gave orders to start work on the wall along the 2,000-mile (3,200-km) border with Mexico, two-time presidential runner-up and leftist opposition leader Andres Manuel Lopez Obrador said the announcement was an insult to his country and called for international legal action.

“I respectfully suggest that the government of Mexico presents a lawsuit at the United Nations against the U.S. government for violation of human rights and racial discrimination,” Lopez Obrador told a crowd of supporters north of Mexico City.

A former mayor of the capital, Lopez Obrador has led several early opinion polls ahead of the July 2018 election, and last week he announced plans for a tour of major U.S. cities in February to drum up support among Mexican-Americans.

Trump’s broadsides against Mexico have put Pena Nieto under rising domestic pressure. His approval ratings are at the lowest level of any Mexican president in years.

The American’s threats to tear up a joint trade deal and impose hefty border taxes on Mexican goods have also battered the peso. But his comments on Wednesday that he wanted to see a strong Mexican economy lifted the currency to a three-week high.