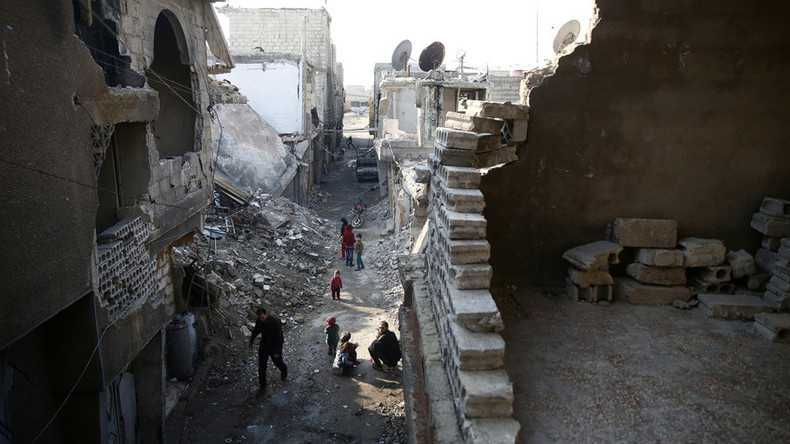 “I’ll absolutely do safe zones in Syria for the people,” he said in a lengthy interview with ABC, his first since taking office. The president did not specify details, but explained his intention with a nod towards Europe, which he said made a mistake by letting in asylum seekers from the Middle East.

“I think that Europe has made a tremendous mistake by allowing these millions of people to go into Germany and various other countries. And all you have to do is take a look. It’s… it’s a disaster what’s happening over there. I don’t want that to happen here,” he said. He noted that his predecessor Barack Obama also allowed thousands of refugees into the United States, which made possible incidents like the tragedy in San Bernardino in 2015, in which 14 people were killed and 22 others were injured in a terrorist attack carried out by a radicalized couple of Pakistani origin. Trump vowed not to repeat those mistakes.

Trump accused the Obama administration of having been unable to properly check immigrants entering the US from Syria and other crisis-stricken states to make sure they had no links to terrorism.

“President Obama and [former Secretaries of State] Hillary Clinton… and [John] Kerry have allowed tens of thousands of people into our country. The FBI is now investigating more people than ever before having to do with terror […] and it’s from the group of people that came in.

“I’m gonna be the president of a safe country. We have enough problems,” Trump said.

Moscow was quick to react to Trump’s plans, with Kremlin spokesman Dmitry Peskov suggesting the US should calculate all the possible consequences.

“It’s important to make sure that this does not further aggravate the situation with refugees,” Peskov told a conference call with reporters.

Yet, according to a document reportedly seen by Reuters, Trump is expected to order the Pentagon and the State Department to compile a plan for setting up the “safe zones” which he proposed.

“The Secretary of State, in conjunction with the Secretary of Defense, is directed within 90 days of the date of this order to produce a plan to provide safe areas in Syria and in the surrounding region in which Syrian nationals displaced from their homeland can await firm settlement, such as repatriation or potential third-country resettlement,” the draft order said, as cited by Reuters.

The move will mean the current US military involvement in Syria’s civil war will be expanded, which may escalate the situation taking into account that American troops and the US-led coalition were not invited to take part in the conflict by the Syrian government in the first place.

The US-governed creation of safe zones would potentially mean an increase in the presence of US or allied air power to cover the zones from air, as well as boots on the ground to protect civilians in these areas. However, according to Reuters, the draft order provides no details on what the safe zones would require in terms of defense or where they might be located.

The draft order provided a notion of setting up the safe zones in neighboring countries, but Syria’s neighbors, including Jordan and Turkey, already have migrant camps of their own hosting millions of Syrian refugees.

“A nation without borders is not a nation. Today, the United States gets back its border.” – Pres. #DonaldTrumphttps://t.co/d4Kv2w9Fpfpic.twitter.com/CosWIJ43JR

Trump’s plan to establish safe zones in Syria is part of his general directive on immigration, which will include a temporary 30-day ban on most refugees and a suspension of US visas for citizens of Syria, Iran, Iraq, Libya, Somalia, Sudan and Yemen, the Middle Eastern and African countries that appear to pose a terrorism threat. Trump’s administration is to use the temporary halt to work out a system which will ensure US visas are not issued to people that pose a national security threat, according to the draft.

Trump also said he will keep his campaign promise and build a wall on the border with Mexico, from where illegal immigrants, including from across the ocean, come into the US.

Addressing America’s involvement in another Middle Eastern crisis – the war in Iraq, the newly-inaugurated US leader regretted not having taken the oil when the US troops left the country in 2011.

In his historic speech at the CIA in Washington, DC, last week, Trump initially stated, “We should’ve kept the oil. But, OK, maybe we’ll have another chance,” sparking debates as to what he could have meant by the statement. In an interview with ABC, the president explained his words, stating that Islamic State (IS, formerly ISIS/ISIL) would not have become a global threat had it not taken over Iraq’s oil industry when the country was left weakened by the war.

“We should’ve kept the oil when we got out. And, you know, it’s very interesting, had we taken the oil, you wouldn’t have ISIS because they fuel themselves with the oil. That’s where they got the money. They got the money […] when we left, we left Iraq, which wasn’t a government.

“We created a vacuum and ISIS formed. But had we taken the oil something else very good would’ve happened. They would not have been able to fuel their rather unbelievable drive to destroy large portions of the world,” Trump stated. He added, however, that Iraq’s oil could profit the United States as well, with the country’s budget drained by its involvement in the wars of the Middle East.

“If we took the oil you wouldn’t have ISIS. And we would have had wealth. We have spent right now $6 trillion in the Middle East. And our country is falling apart.”

When asked by the news anchor whether he plans to fix that mistake and claim Iraq’s oil, the president said he would rather not give away his military plans, referring to the situation around Mosul, the de-facto IS capital in Iraq. The city has been under siege by Iraqi government forces, allied militias, Iraqi Kurdistan, and international forces for over three months now, with no forecasts so far on when the city will be liberated from terrorists. This, in Trump’s opinion, is due to the fact the campaign had been over-advertised.

“We’re gonna see what happens. You know, […] when it comes to the military I don’t want to discuss things.

“I kept saying to myself, ‘Gee, why do they have to keep talking about going in?’ Alright, so now they go in and it is tough because they’re giving the enemy all this time to prepare. I don’t want to do a lot of talking on the military. I want to talk after it’s finished, not before it starts,” Trump said.