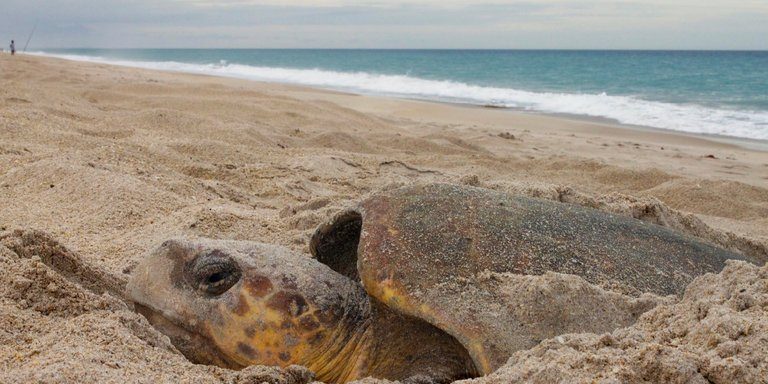 Sea Turtles Use Magnetic Fields to Find Their Birthplace Beach

Sea turtles use the earth’s magnetic fields to navigate back to the area where they were born decades earlier, according to a new study that used loggerhead genetics to investigate their travels.

After swimming for years in a giant loop from nesting grounds in North Carolina and Florida to North Africa, the turtles find their way back to nest on beaches within about 40 to 50 miles of where they were born. The new study suggests that the turtles learned their home beach’s distinctive magnetic signature, through what is called geomagnetic imprinting.

“This is vital information if you want to restore sea turtles to areas where they once lived before being hunted to extinction,” said Kenneth Lohmann, a professor at the University of North Carolina, Chapel Hill, and senior author of the study published Thursday in Current Biology.

He added that the same concepts may be applicable for restoring salmon and other fish to rivers because many birds and fish also use magnetic fields for navigation.

“That’s really cool and really impressive and they do it traveling through the seemingly featureless open ocean,” said J. Roger Brothers, the paper’s first author and a sea turtle expert, who is scheduled to receive his Ph.D. from Chapel Hill next month.

The turtles can perceive both the magnetic field’s intensity and its inclination angle, the angle that the field lines make with respect to the Earth’s surface, earlier research has shown.

“We expect that geographically close locations will be genetically related, and geographically distant locations will have distinct populations. That’s not what we see,” Mr. Brothers said. “The variation in earth’s magnetic field around the nesting area seems to really predict genetic differentiation much better than geographic distance.”

It’s also a better predictor than environmental conditions like beach temperature, he said.

Loggerhead turtles are known to nest on Florida’s Gulf as well as Atlantic coasts, with some apparently nesting on both sides of the peninsula at different points in their life, Mr. Brothers said. With magnetic fields running across the peninsula, individual turtles might be making navigational errors and nesting on beaches that are magnetically similar to their home beach, but on opposite coasts, he said.

Dr. Lohmann said that conservation efforts in Bermuda, where there have been unsuccessful attempts to restore sea turtle populations driven to extinction centuries ago, might benefit from considering this geomagnetic imprinting.

Theoretically, turtles might be encouraged to nest on certain beaches if the magnetic field of hatchlings were manipulated to convince them that they were born in a different location.

The current study is based on genetic data, not experimental evidence, but Dr. Lohmann said a more definitive study would be too challenging to undertake. Sea turtles don’t begin to reproduce until they are about 20, and only one out of 1,000 hatchlings survives to reproduce, so scientists would need to run an unrealistically long and large experiment, he said.

Even without being definitive, the new research is still useful, said Nathan Putman, a senior scientist at LGL Ecological Research Associates Inc. in Bryan, Tex., who was not involved in the study.

“Understanding very fundamental and basic aspects of the organism’s navigational decisions gives you a lot more information,” he said.