Transfer of Boko haram prisoners down to S’East is abomination – Ezeonwuka, Igbo leader 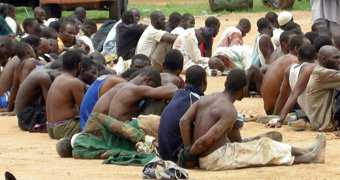 ONITSHA –The Ogirishi of Igbo land, Chief Rommy Ezeonwuka has described the recent transfer of about 47 suspected Boko haram insurgents who were in prison custody in various parts of the north, down to Aguata prison in Anambra state (if it is true), as an abomination in Igbo culture and tradition.

He said the authorities concerned should take the prisoners back to the north because Igbo land is so sacred that it does not need Boko haram insurgents to pollute the convivial atmosphere prevalent in the land.

boko-haram-custom-dataSpeaking to newsmen yesterday at his Rojenny Sports Stadium/Games Village, Oba, Anambra state in reaction to the alleged transfer of the detained insurgents to Aguata prison, Ezeonwuka declared: “any protest to remove the Boko Haram prisoners from Igbo land is encourageable because god of our land condemns or abhors such an idea and besides, the suspects should be tried in the area they committed the crime”.

On the issue of Biafra, Ezeonwuka noted that rather than struggling to get a republic of Biafra, Ndigbo should bring their investments scattered all over Nigeria and beyond back home and nurture them to growth.

He said that with adequate security and relocation of all the Igbo investments to Igbo land which will in turn create employment opportunities for Igbo youths, Igbo territory will begin to bubble like Japan, Korea and Dubai still within Nigeria which is better than struggling to shrink into a smaller enclave called Biafra.

“Igbo people who invested outside Igbo land should bring back their investments home to transform Igbo land into Japan, Korea and Dubai because to me, we are foolishly and stupidly developing other areas and denying ourselves of industrializing our own land”, he stated.

“We should concern ourselves with how to develop Igbo land and not how to become a Biafra republic because that name Biafra is treasonable and you can’t have a sovereign state in an existing one. How can we destroy what we have as Nigerians in search of Biafra republic? Once we create adequate security and productivity, we shall develop Igbo land and live comfortably”.

He said that Ndigbo are the true Nigerians who do not need to shrink into Biafra to get what they want, adding that as a pioneer contributor to burying the dead Igbo sons and daughters who died during the civil war, all that is required is to cleanse the land of evil vices, now that thousands of Igbo youths who died during the war had been given a befitting burial, to enable their hovering angry spirits rest in peace.