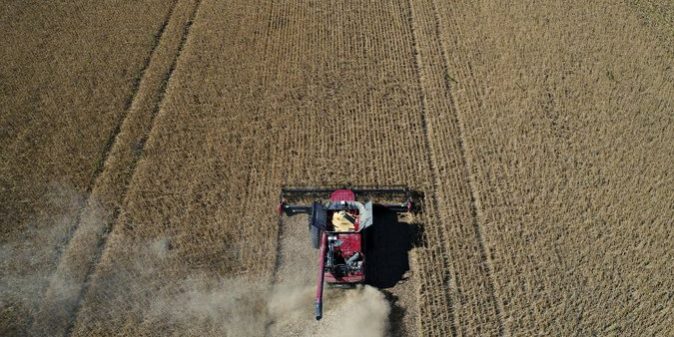 Hours after the White House outlined $50 billion in tariffs on largely high-tech Chinese products, China announced its own tariffs on $50 billion worth of American goods.

China’s list focused on agricultural products that come from the Republican-dominated farm belt, where lawmakers might be expected to have some influence with President Trump. Above, harvesting soybeans in Illinois.

Administration officials say they see no reason to panic, and markets rose after an erratic day.

2. The White House said that the U.S. would remain in Syria to continue the fight against the Islamic State — just a day after President Trump said “it’s time” to bring the 2,000 U.S. troops there home.

Mr. Trump’s own national security team is in flux, and Pentagon officials argued strenuously against a pullout. They pointed to the rise of the Islamic State in Iraq after President Obama withdrew — a precedent they said laid the groundwork for the militant organization to flourish.

3. President Trump will sign a proclamation directing federal officials to work with governors to deploy National Guard troops to the southwest border.

That decision started earlier this week with a Fox News report about a caravan of Central American migrants moving north through Mexico, above. On today’s episode of “The Daily,” we look at how Mr. Trump’s approach to immigration transformed over 72 hours.

4. Facebook raised its estimate of how many people’s data was improperly used by Cambridge Analytica, a consulting firm tied to President Trump. The new number? As many as 87 million.

Mark Zuckerberg, Facebook’s chief executive, above, will testify before Congress next week on its handling of sensitive user data.

And at Google, thousands of employees signed a letter protesting the company’s role in a Pentagon program that uses artificial intelligence to interpret videos and could be used in drone strikes.

5. Anger that YouTube was blocking her videos may have motivated the woman who shot three people on Tuesday at the company’s headquarters in San Bruno, Calif., and then killed herself with the same handgun.

Nasim Najafi Aghdam, above, who was in her late 30s and living in California, was a social media star in Iran. Known there as “Green Nasim,” she posted music parodies and workouts, promoted vegan cooking and opposed animal cruelty. (We gathered some of her clips in this video, which our Tehran bureau chief narrates.)

Some of her videos were apparently “demonetized” — deliberately starved of ads — by YouTube, which has been under pressure over offensive content.

We sat in as students at Marjory Stoneman Douglas High School in Parkland, Fla., above, put together their yearbook — and grappled with how to tell the story of the mass shooting that took the lives of 17 people.

And the Patriots star Julian Edelman may have thwarted a school shooting by reporting a threat, left by a 14-year-old, in a comment on one of Edelman’s Instagram posts.

7. Thousands of people gathered in Memphis to commemorate the 50th anniversary of the assassination of the Rev. Dr. Martin Luther King Jr.

In a Times Op-Ed, the Rev. Jesse Jackson, once an aide to Dr. King, reflects on his legacy:

“We owe it to Dr. King — and to our children and grandchildren — to commemorate the man in full: a radical, ecumenical, antiwar, pro-immigrant and scholarly champion of the poor who spent much more time marching and going to jail for liberation and justice than he ever spent dreaming about it.”

For complete coverage of the 50th anniversary of Dr. King’s assassination, including original essays and photos from our archive, click here.

8. Global warming is causing spring to arrive early and autumn to come late in many places, and not all plants and animals are adapting at the same rate.

Scientists who study the changes in plants and animals triggered by seasons have a term for this: phenological mismatch. And they’re still trying to understand exactly how it works and what the consequences might be.

Here are five mismatches they’ve discovered so far, including one that means the calves of caribou in western Greenland, above, are dying at higher rates.

They mix the roles of traditional tutor and straight-up therapist, in person or online. Some New York City parents are doling out hundreds of dollars for the academic help and emotional support for their children.

Meanwhile, thousands of teachers in multiple states are striking to protest cuts in pay and benefits and school funding. Inspired by circulating photos of crumbling textbooks in Oklahoma schools, our Reader Center is asking public school teachers about conditions in their classrooms.

“These shows return with casts largely intact, and conceit and ideology trapped in amber, too,” our critic writes. “But both of them are also experiments to see whether the structures of a more naïve time can hold up when filled with a more self-aware participant.”

Speaking of self-awareness, the late-night hosts took aim at President Trump’s broadsides against Amazon. “This is when I appreciate Twitter,” Seth Meyers said. “It used to be, if you wanted to hear a 71-year-old man whining about the post office, you had to go to the post office.”