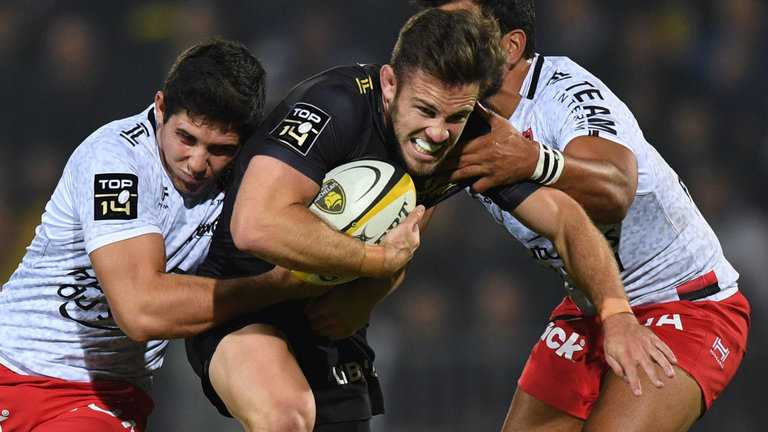 La Rochelle can snatch top spot in the Top 14 on Saturday when they attempt to add Toulon to their impressive list of victims on the road, live on Sky Sports 4 HD from 1.40pm.

The second-placed side have already gained more points on their travels this season than they did in the entire two previous campaigns.

After seven games away from their Stade Marcel-Deflandre home, they have three wins; last season they failed to win a single match on their travels while picking up just one in the previous campaign.

La Rochelle are comfortably the best team on the road this season with 16 points compared to the 15 banked by league leaders Clermont and third-placed Montpellier.

“It might be surprising for you, but not for us. We are with the players every day and we know what they are capable of,” said head coach Patrice Collazo.

“From one year to the next, we try to learn from the mistakes of the past.”

Lock Damien Lagrange believes La Rochelle have also learned not to feel insecure even with big-spending Toulouse and Toulon breathing down their necks.

“We are more mature than last year, we don’t panic,” he said.

As a case in point, just before Christmas, La Rochelle trailed at rock-bottom Bayonne 17-3 at half-time before romping to a thumping 42-17 triumph. Flying winger Gabriel Lacroix grabbed four tries that night.

Skipper and former All Black Jason Eaton believes La Rochelle should be better placed in the table than they are – they are just a point behind Clermont and nine ahead of fifth-placed Toulon.

“In all of our matches played, we had chances to win,” said Eaton, capped 15 times by New Zealand.

“In all away games, we played with the hope of winning. If we want to be taken seriously, we have to seize our opportunities.”

La Rochelle will be without props Uini Atonio and Mohamed Boughanmi as well as back-rower Kevin Gourdon, who are all on Six Nations duty with France.

Toulon, meanwhile, enter a key part of their season with a mouth-watering European Champions Cup quarter-final to come in April at Clermont.

They were buoyed on Thursday when veteran Springboks winger Bryan Habana signed a new deal, committing himself to the club until 2018.

Clermont don’t play until Sunday when they travel to Bordeaux, who sit one spot outside the play-offs in seventh.

Fourth-place Toulouse host Pau and are boosted by the return of 22-year-old international flanker Yacouba Camara who has been sidelined with a knee problem for nine months.

Racing 92, still smarting from their woeful Champions Cup campaign, are at Lyon – live on Sky Sports 5 HD from 7.40pm – looking to make up a three-point gap on the play-off places.

Lyon will be playing their first match at the Stade Gerland, the former home of the city’s football club, but they will mark the occasion without influential playmaker Frederic Michalak, who has a shoulder injury.