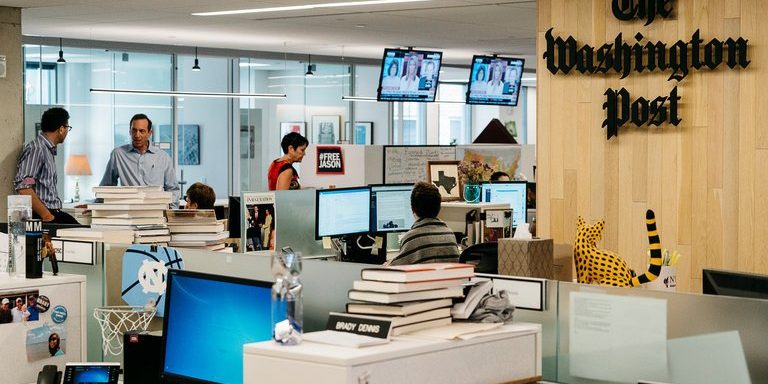 Amazon does not own The Washington Post. President Trump, however — impervious to certain facts and armed with a Twitter account — has tried hard to convince the public otherwise.

On more than one occasion, the president has called the newspaper the “Amazon Washington Post.” He has also accused it of being used as a “scam” to keep Amazon’s taxes low. And on Twitter over the weekend, he escalated his attack, declaring the “Fake Washington Post” a “lobbyist” for Amazon and demanding that it “REGISTER.”

Jeff Bezos, the founder and chief executive of Amazon, bought The Post for $250 million in 2013. Under his ownership, the paper has flourished. Buoyed by new resources, it has added more than 200 newsroom employees and recently surpassed one million digital subscribers.

While Mr. Bezos has reinvigorated The Post, he has found himself vulnerable to the president’s attacks. Since 2015, Mr. Trump has linked The Post and Amazon on Twitter a dozen times.

“If @amazon ever had to pay fair taxes, its stock would crash and it would crumble like a paper bag. The @washingtonpost scam is saving it!” Mr. Trump tweeted in December 2015.

“The #AmazonWashingtonPost, sometimes referred to as the guardian of Amazon not paying internet taxes (which they should) is FAKE NEWS!” he wrote in June last year.

“Is Fake News Washington Post being used as a lobbyist weapon against Congress to keep Politicians from looking into Amazon no-tax monopoly?” he tweeted the next month.

How do the president’s broadsides play inside The Post’s newsroom?

“I don’t even know how to describe what goes through my mind,” Martin Baron, the paper’s executive editor, said in a telephone interview on Monday. “It’s completely made up.”

People close to the president have said critical articles in The Post often trigger his public musings about Amazon. Last week, after The Post reported that Mr. Trump’s lawyer had raised the prospect of offering pardons to two of Mr. Trump’s former top advisers, Michael Flynn and Paul J. Manafort, Mr. Trump fired off a tweet saying that Amazon did not pay enough taxes and was “putting many thousands of retailers out of business.” (The Post’s report on the talk of pardons followed an article on that subject in The New York Times, which has also drawn the president’s wrath on Twitter.)

It is not clear which article, if any, set off Mr. Trump’s Saturday morning barrage against Amazon and The Post. The paper had published an article on Friday about the Trump Organization’s finances, which it described as being “under unprecedented assault a year into his presidency” because of legal reviews.

Mr. Trump’s tweeted criticisms of Mr. Bezos, Amazon and The Post may not have much bite. Lindsay Walters, a White House spokeswoman, told reporters last week that “the president has expressed his concerns with Amazon,” adding, “We have no actions at this time.”

The president’s tweet storm may have had one real-world effect, however: Amazon’s stock fell 5.2 percent on Monday, a day when the Standard & Poor’s 500-stock index dropped 2.2 percent.

As the group of wealthy business leaders who own newspapers grows — Patrick Soon-Shiong, a billionaire medical entrepreneur, agreed in February to buy The Los Angeles Times — Mr. Trump’s blasts at Mr. Bezos and Amazon could provide a template for future lines of attack against individuals and companies with ties to news organizations whose coverage he does not like.

“Do I think it’s a bad thing that the president is attacking a news outlet, period? Yes,” said Indira Lakshmanan, who holds the Newmark chair in journalism ethics at the Poynter Institute, a center for media studies. “And that he’s attacking a business owned by an owner of a media company? Yes, if there are no grounds for it.”

On Monday, Mr. Baron said The Post was not cowed by Mr. Trump’s invectives. “We cover him the way that we feel any president should be covered,” he said. After Mr. Trump’s tweets on Saturday, the paper published an article under the headline “Trump accuses Amazon of ‘Post Office scam,’ falsely says The Post is company’s lobbyist.”

Mr. Baron also rebuffed any suggestion that The Post was a lobbyist for Amazon, as Mr. Trump has proclaimed at times.

“There isn’t anybody here who is paid by Amazon,” he said. “Not one penny.”

(Drew Herdener, an Amazon spokesman, declined to comment or to provide an interview with Mr. Bezos.)

Mr. Bezos holds conference calls with The Post’s leadership every other week to discuss the paper’s business strategy but has no involvement in its news coverage, Mr. Baron said. During his occasional appearances at The Post’s building, Mr. Bezos sometimes stops by a news meeting “just to thank everybody,” Mr. Baron said.

“Frankly, in a newsroom of 800 journalists, if that had occurred, I guarantee you, you would have heard about it,” he added. “Newsrooms tend not to like those kinds of interventions, particularly a newsroom that’s as proud as The Washington Post.

“If he had been involved in our news coverage, you can be sure that you would have heard about it by now,” Mr. Baron added. “It hasn’t happened. Period.”

Mr. Bezos’ hands-off approach extends to The Post’s coverage of Amazon. During a town hall-style meeting held before his deal for The Post was completed, he told the paper’s employees that they should cover him as they would any other business executive and treat Amazon no differently from any other company, Mr. Baron said.

“He’s reiterated that to me any number of times,” he said. “He doesn’t get involved. I’ve never heard from him on any story that we’ve written about Amazon, and we’ve had any number of them that are critical.”

By Monday morning, it seemed that Mr. Trump had found a new target.

“So funny to watch Fake News Networks, among the most dishonest groups of people I have ever dealt with, criticize Sinclair Broadcasting for being biased,” the president tweeted, responding to negative reports over the weekend about the Sinclair Broadcast Group. “Sinclair is far superior to CNN and even more Fake NBC, which is a total joke.”