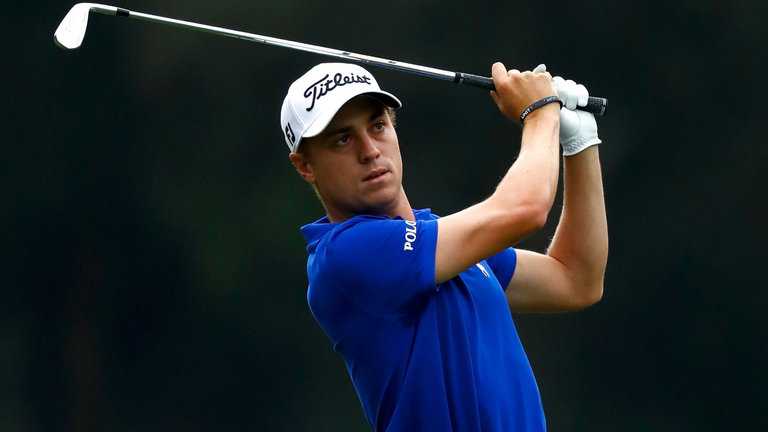 A hole-in-one helped Justin Thomas grab a one-shot lead over Dustin Johnson after the third round of the WGC-Mexico Championship.

Thomas aced his tee-shot at the par-three 13th on his way to a five-under 66 at Chapultepec Golf Club, with a strong back-nine 31 seeing him leapfrog the world No 1.

Phil Mickelson and halfway leader Rory McIlroy, making only his second start of 2017, head in to the final round two strokes adrift, with Lee Westwood and Jon Rahm another shot behind.

Johnson drove the par-four first green and drained a 20-foot eagle before holing from a couple of feet closer at the next to grab a share of the lead.

McIlroy edged ahead after getting up-and-down from the bunker at the first but then bogeyed his next two holes, as Mickelson chipped in from off the green at the first and fourth to move tied-top.

The American failed to save par from 18 feet at the fifth, with Johnson tapping in for birdie at the sixth to open up a two-shot cushion.

Johnson missed birdie opportunities at the seventh and ninth to close a front-nine 31, as McIlroy cancelled out a blemish at the eighth by matching Mickelson’s gain at the ninth to lift the pair within one at the turn.

Thomas headed in to the back nine four strokes back but jumped alongside Johnson after following birdies at the 10th and 12th by holing his 232-yard tee shot at the par-three next.

The US Open champion responded with a birdie-two at the same hole as Thomas bogeyed the par-four 14th, before the pair exchanged gains at the next.

McIlroy stayed in the hunt with a tap-in at the 11th and Mickelson bounced back from a wayward drive and bogey at the 12th with successive birdies from the 15th.

As Johnson carded a first blemish of the day at the 16th, Thomas converted from eight feet to grab the outright lead and Mickelson picked up another shot at the 17th to get to 11 under.

Thomas and Johnson both made a par at the last, where Mickelson’s approach missed the green on his way to a closing bogey.

McIlroy signed for a one-under 70 to join Mickelson on 10 under, with Westwood a shot behind alongside Rahm after a superb back nine of 31.

English pair Tommy Fleetwood and Tyrrell Hatton are five off the pace following rounds of 66 and 68 respectively, while two-time major winner Jordan Spieth carded a course-record 63 to get to seven under.