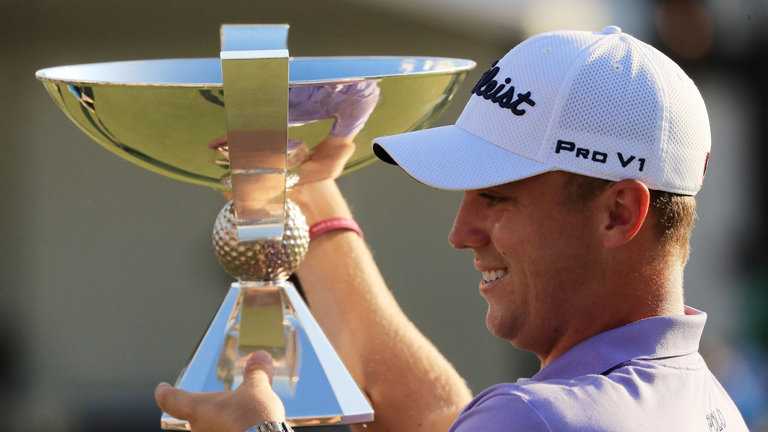 Justin Thomas secured the FedExCup and its $10m jackpot with a runner-up finish at the Tour Championship.

The PGA champion fired a five-under 66 at East Lake to move above Jordan Spieth at the top of the FedExCup standings, as Xander Schauffele claimed a one-shot victory in the season-ending finale.

Schauffele began the day two strokes adrift of 54-hole leader Paul Casey – whose challenge faded with a closing 73 – but birdied the last to secure a second victory of his PGA Tour rookie season.

Russell Henley and Kevin Kisner finished the week in 10 under and a share of third spot, with Casey in fifth place ahead of US Open champion Brooks Koepka.

Casey lost his overnight lead with back-to-back bogeys from the fourth, as Kisner edged ahead by cancelling out his blemish at the same hole by birdieing the fifth and draining a 30-footer at the next.

Thomas posted a front-nine 33 and found himself in a share of the lead alongside Schauffele, who reached the turn level-par, when Kisner failed to get up-and-down from the bunker at the 10th.

Kisner bounced back from another bogey at the 11th to hole a putt from just off the next green, only for Schauffele to move ahead by birdieing from six feet at the 13th.

Spieth bolstered his hopes of winning the $10million jackpot with a hole-out eagle at the 10th and kick-in birdie at the 13th, but slipped back behind Thomas with a bogey from eight feet at the 15th.

Thomas posted back-to-back birdies from the 16th to pull into a tie for the lead but could only par the par-five last, as Schauffele held his nerve and converted a two-foot birdie for victory.

A bogey-free round-of-the-day 65 took Henley to 10 under, with Kisner moving alongside him after matching Casey’s closing birdie.