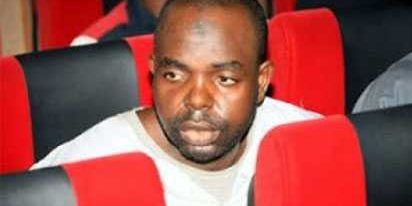 Kingpin of the Boko Haram sect, Mustapher Umar, who had on April 26, 2012, bombed office of the Thisday Newspaper in Kaduna State with 12 camp gas cylinders, was yesterday, handed a life sentence by a Federal High Court sitting in Abuja.

Trial Justice Ademola Adeniyi in his judgment said he was convinced that the accused person deserved to be “removed from the public so that he will not kill more innocent persons.”

“He has not shown any remorse whatsoever, even all through the proceeding,” Justice Adeniyi noted, saying the convict should be subjected to hard labour while in prison.

three persons, included The Moment and the Sun Newspapers.

In the course of the trial, the High Court, heard how the accused person wept bitterly when he was rescued from a badly burnt Honda car that was allegedly used for the operation, saying he had been denied the opportunity of inheriting 72 virgins in heaven.

Likewise, the court, watched a video clip where the accused person confessed that he was sent to bomb Thisday Newspaper owing to a report he said did not only put Islam in false light, but greatly insulted Prophet Mohammed.

In the video which was admitted in evidence, Umar, said his action was to avenge the insult he said was meted to “Allah” through the media outlet.

To prove his culpability, the Federal Government, tendered 22 separate exhibits against and called 10 witnesses that testified before the court.

Meantime, Justice Adeniyi, who had on July 2, dismissed a ‘No-Case-Submission’ that was made by the convict, yesterday, said he was satisfied that Umar has utmost disregard for human lives.

“The reasons given by the accused person for attacking the media houses are most unreasonable. The convict does not have the right to take law into his hands over alleged violation of Islamic law. As evidence before this court has revealed, three innocent souls were lost as a result of his terrorist act.

“Human life is sacred and no human life is more sacred than the other. The convict has by his conduct and action, shown utmost disregard for human life. In his attempt to deny the allegation, he said he was only passing by when the explosion took place.

“The three souls will be demanding for justice wherever they are and it behoves on the court to do that. Press is one of the important institutions in this country. Any attempt to muzzle them is most anti-democratic.

“Taking into consideration all the evidence adduced before this court, the way the plan was hatched and the level of coordination of the attack, showed that it was conceived from an evil mind. This Court is convinced that the convict should be removed from the public so that he will not kill more souls, so I will definitely not spare him.

Therefore, in-line with section 33(1) (a) of the Terrorism Prevention Act, I sentence the convict to life imprisonment with hard labour.

“I hereby equally award the sum of N150million against the convict, to be paid to the families of the victims of the attack. How he intends to raise the money is of no concern to this court.

“Likewise, whereas the Honda Accord should be forfeited to the Federal Government, the exhibits should be retired back to the prosecution till after the periods of appeal against this case elapses. Those are my orders,” Justice Adeniyi held yesterday.

Earlier, counsel to the convict, Mr Nuru Sulyman, begged the court to temper justice with mercy, saying Umar not only have a young wife and kids, but equally have aged parents who rely on him for their daily living.

He urged the court to note that his client was never initially caught or charged with any act of terrorism prior to the instant case.

However, the court, said it was satisfied that the government proved its case beyond every reasonable doubts, stressing that not only were the witness statements and eye-witness accounts not controverted, the court, is in possession of the confessional statement of the convict.

Justice Adeniyi, said the accused person, having failed to challenge any of the proof of evidence against him, “they all have probate value before the court”, he added.

It will be recalled that Umar had earlier challenged his trial, insisting that he has no case to answer. It was his contention that the government failed to establish a prima-facie criminal charge against him.

According to the one-count criminal charge upon which the court found him guilty yesterday, his act of terrorism, ran contrary to section 1(2) (c) (r) of Terrorism Prevention Act, 2011, punishable under section 33 (1) (a) of the same Act.

Among those that testified in the course of the trial included a senior police officer charged with the responsibility of keeping exhibits recovered from terror suspects.

The masked witness, PW-8, who told the court that the accused person had intended to carry out a suicide attack, tendered the burnt Honda car, the discharged Cylinders and half charred 25 litter jerry-can which allegedly contained fuel.

In a video clip he tendered to the court, the convict, who spoke in Hausa language, said he knew those that also bombed the Abuja office of the Thisday Newspaper, maintaining that the attack was equally as a result of the “sins” the media house committed against Islam.

“I am only a Muslim and I promised to myself that as long as I am alive, whoever insulted a prophet of Allah I will revenge.”

When he was asked what informed his decision to attack the media organizations, he replied: “Since that time when beauty contest was conducted, Thisday Newspaper insulted Prophet Mohammed that is why I went and did this to take revenge. My intention was to eliminate them that they will not work again. You know that whoever insults a prophet of Allah is not suppose to exist.

“There is tradition of the prophet which says that whoever insulted the prophet of Allah should be killed. For some years back I was praying for God to give me this opportunity to perpetrate this action and today God has given me the chance,” he added.

The accused further confessed that he was trained by one Sheik Ja’afar M. Adam, adding that he had alongside two of his friends Ibrahim and Mallam Nasuru, constructed the Improvised Explosive Device, IED, he used to carry out the attack, using gas cylinder, urine powder, chemicals and wire.

However, immediately FG closed its case having called 10 witnesses that testified in the matter as well as tendered 22 separate exhibits, the accused person, through his lawyer, Mr. Nuru Sulyman, insisted that neither the witnesses nor the exhibits established a nexus between him and the alleged terrorist act.

He contended that the FG edited the video it played before the court, saying the parts were he was being tortured to admit complicity in the terrorist act, was deliberately removed.

He urged the court to strike out the charge against him, decrying that all the witnesses he wanted to produce in court to testify on his behalf ran away owing to fear.