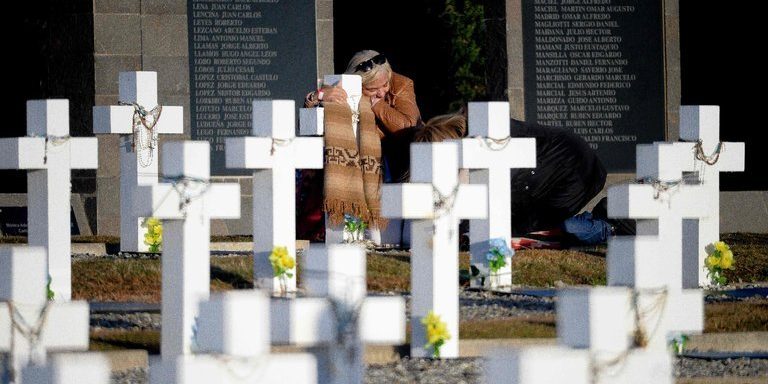 BUENOS AIRES — When Dalal Abd de Massad went to the Darwin cemetery in the Falkland Islands this week it was the first time that she had hugged the gravestone with her son’s name.

“I was finally able to cry at his grave,” Ms. Abd said of her son, Daniel. “I talked to him, told him everything that happened in these years. I hugged that white cross as if I was hugging him.”

Ms. Abd and her husband, Osvaldo Said Massad, were part of a delegation of 250, mostly family members of fallen soldiers, who traveled to the disputed islands for a ceremony to mark the identification of 90 Argentine service members who died in a 1982 war with Britain and had been buried as unknown soldiers.

For 36 years, the plaque on Daniel Massad’s grave said, “Argentine soldier known only to God.” Now, thanks to the work of forensic scientists, families have finally learned where their loved ones are buried.

When Eulogia Rodríguez reached the cemetery on Monday, she ran straight to the newly identified grave of her brother Macedonio Rodríguez, who died on the islands when he was 19.

“To see my brother’s name written in a plaque was simply amazing, and we couldn’t stop crying,” Ms. Rodríguez said.

Ada Elizabeth Torrez remembered saying farewell to her brother, Omar Enrique Torrez, when she was 14 and he was off to a war that she did not understand very well.

When she traveled to the Falklands on Monday, “it was as if time stopped, we were all very emotional, but there was a peace that was hard to explain,” she said. “I never left my brother’s side until they told us it was time to leave.”

For all of the surviving family members, the identification of the graves was the end of a long struggle that began after the war ended and they were not immediately told the fate of their loved ones.

Macedonio Rodríguez, Daniel Massad and Omar Enrique Torrez were among the 649 Argentines killed in the war. Almost half that number died in the sinking of the Argentine Navy ship General Belgrano.

A total of 255 British troops were killed in the 74-day conflict that began with the Argentine invasion of the islands on April 2, 1982.

Although Argentina still claims sovereignty over the islands it calls the Malvinas, the invasion is now widely seen as a desperate attempt by a waning military dictatorship to maintain its grip on power. The embarrassing defeat in the war was the beginning of the end for the junta, which gave way to a democratically elected government in December 1983.

But in the nascent democracy, families often felt that the sacrifices of their loved ones in battle were forgotten.

“He fought and died for a land that is Argentine,” Ms. Torrez said. “Whatever anyone says, that’s the way it is.”

In 2012, the International Committee of the Red Cross began interviewing families of Argentine soldiers who had died in the war. But it was not until late 2016 that Argentina and Britain agreed to begin DNA testing of the unidentified bodies.

The government of President Mauricio Macri, who came into office in December 2015, said its efforts to improve relations with Britain helped pave the way for identifications.

“Before Macri there was no dialogue, so there were no opportunities for mutually beneficial cooperation,” Foreign Minister Jorge Faurie said. “Now we have been able to launch talks that set aside the issue of sovereignty over the Malvinas to cooperate in other areas, including the possibility of recognizing the bodies in Darwin cemetery.”

In the end, 90 bodies were identified from the 107 families who gave DNA samples, and results for eight more could soon be available.

“More families are coming to us and asking for information,” said Luis Fondebrider, president of the Argentine Forensic Anthropology Team that carried out the DNA tests. “This is a process that should have happened much earlier. So many parents died without knowing where their sons were buried.”

Now that the graves bear names, most of the families have no interest in moving the remains because they believe that the Malvinas are Argentine territory.

“That spilled blood is the emblem of our sovereignty over that land,” Ms. Abd said.

Some family members say they hope that the identifications will lead to a renewed recognition of the sacrifices of the fallen.

“I hope someday the country recognizes and values the kids who died there,” said Aida Manuela Cejas, 79, Mr. Torrez’s mother, who was not able to travel Monday to visit her son’s grave. “But for now I’m at least happy that my grandkids will be able to go to Malvinas and honor their uncle at his grave.”

A version of this article appears in print on March 29, 2018, on Page A6 of the New York edition with the headline: Argentina Names Its Soldiers Who Died in Falklands War. Order Reprints| Today's Paper|Subscribe