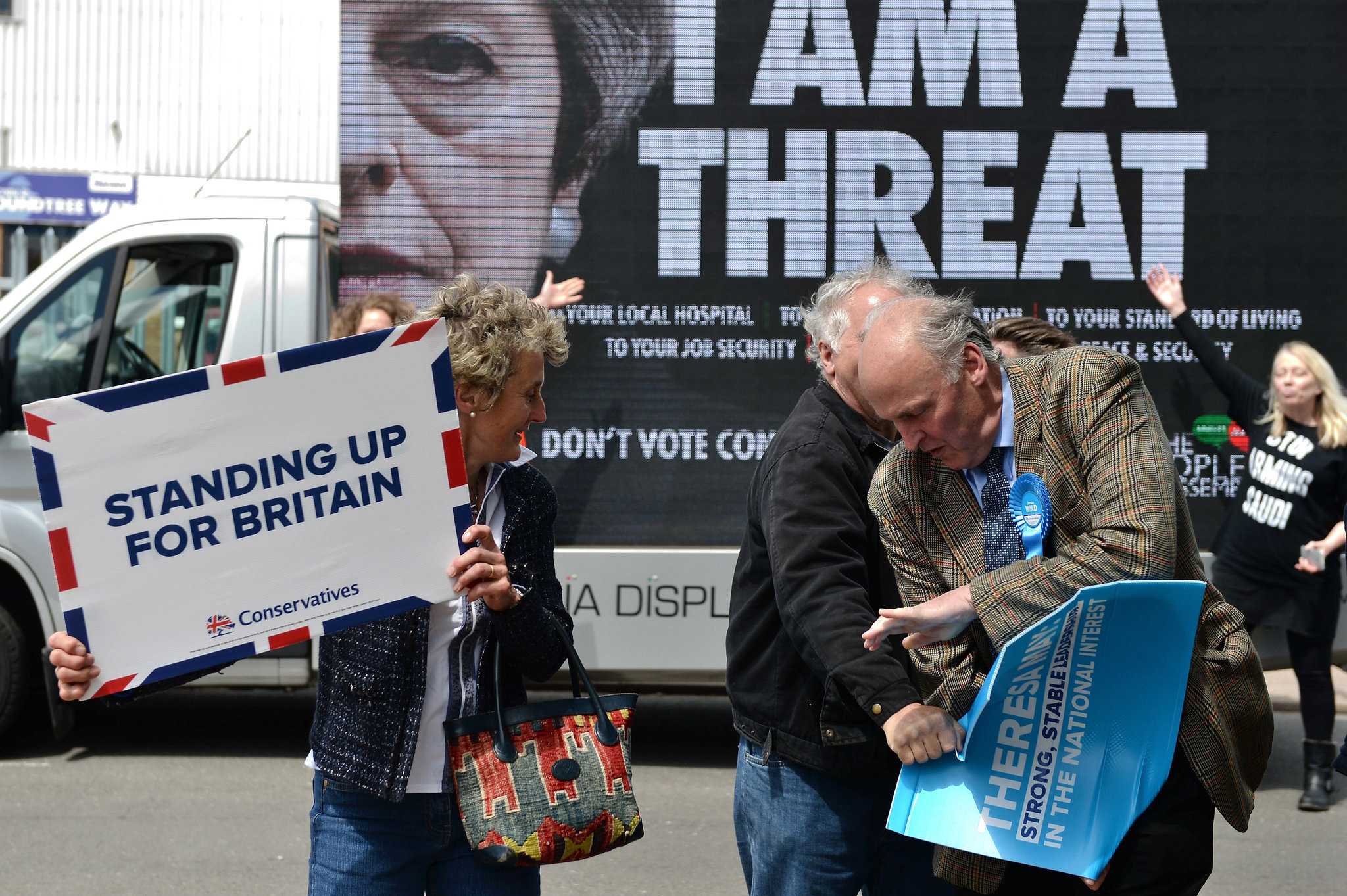 BATH, England — The British prime minister’s blue battle bus had just arrived for a campaign stop at a factory when the booing started.

A motley crew of protesters, among them anti-fox-hunting activists and beret-wearing pro-Europeans, greeted Theresa May by playing “Liar, Liar,” the anti-May tune that has become one of the top 100 songs on the U.K.

iTunes store, on repeat. Inside Cross Manufacturing, an aerospace supplier, the blue-collar workers broke into applause only after a questioner asked whether her refusal to debate other candidates on television was a sign of fear and weakness.

Britain is having its first national election since the so-called Brexit referendum last June, when the country voted to leave the European Union, a race unfolding in the unsettling glare of two terrorist attacks that killed 29 people in the last three weeks. It has not quite turned out as Mrs. May had hoped; having tried to make the campaign about the shortcomings of the Labour leader, Jeremy Corbyn, the race is now as much about her own.

BATH, England — The British prime minister’s blue battle bus had just arrived for a campaign stop at a factory when the booing started.

A motley crew of protesters, among them anti-fox-hunting activists and beret-wearing pro-Europeans, greeted Theresa May by playing “Liar, Liar,” the anti-May tune that has become one of the top 100 songs on the U.K. iTunes store, on repeat. Inside Cross Manufacturing, an aerospace supplier, the blue-collar workers broke into applause only after a questioner asked whether her refusal to debate other candidates on television was a sign of fear and weakness.

Britain is having its first national election since the so-called Brexit referendum last June, when the country voted to leave the European Union, a race unfolding in the unsettling glare of two terrorist attacks that killed 29 people in the last three weeks. It has not quite turned out as Mrs. May had hoped; having tried to make the campaign about the shortcomings of the Labour leader, Jeremy Corbyn, the race is now as much about her own.

When she called the snap vote seven weeks ago — after insisting for months she had no intention of doing so — Mrs. May seemed unassailable. Twenty points ahead of her nearest contender in opinion polls, and with most of Britain’s attack-dog tabloids cooing at her every move, the 60-year-old vicar’s daughter appeared a perfect fit for the post-Brexit mood.

A hard-liner on immigration and more skeptical of free markets than any conservative leader in four decades, she vowed to defend her country in Brexit negotiations abroad and to protect the working class from untrammeled capitalism at home. Gray-haired, unflamboyant, provincial, the very definition of keep-calm-and-carry-on, Mrs. May seemed to be exactly what England wanted.

She even turned an insult by a male conservative colleague — he described her as a “bloody difficult woman” — into a testament to her strong character and promised to live up to it in Brexit negotiations.

But then the campaign started and the polls tightened. Mrs. May, who had hoped to win a landslide and a mandate going into Brexit negotiations, has proved to be an uninspired retail politician: wooden in manner, ill at ease with voters, flip-flopping on flagship policy proposals and robotically repeating the same rehearsed lines.

Her mantra of “strong and stable” leadership (mentioned four times in her 25-minute appearance in Bath) has been lampooned as “wrong and feeble,” “weak and wobbly” and worse. An interview she gave to a local paper last week went viral for saying absolutely nothing. A giant chicken follows her on the campaign trail to remind voters of her refusal to participate in televised debates.

Even her own officials have referred to her as “Theresa May – or Maybe Not.”

Mrs. May is still expected to win, but with her authority diminished. Even the recent series of terrorist attacks, events that normally rally people around the incumbent, have become a problem for her: As home secretary, Mrs. May was in charge of counterterrorism policy for six years, and this at a time when the Conservatives’ austerity budgets were squeezing funds for policing. Scrambling, she has taken a tough line in recent days, vowing to keep the country safe, even if it meant changing human rights laws “if they get in the way.”

But as they go to the polls on Thursday, British voters are still trying to figure out who their prime minister is.

Is she the awkward, scripted, hollow candidate who buckles under pressure and is “just not that good,” as one disappointed machine operator in Bath put it?

Or is she, as some would have it, the defining political leader of the Brexit age, a kind of Margaret Thatcher for the 21st century, who will oversee a radical reform of the economic consensus for Britain and beyond?

“We will only find out who Theresa May really is after the election,” said Ceri Thomas, a former editor of the BBC’s flagship “Today” program.

After a referendum on Scottish independence in 2014, a general election in 2015 and last year’s Brexit ballot, this will be the fourth major vote in four years.

“The country is exhausted,” said Rachel Johnson, a writer (and sister of the foreign secretary, Boris Johnson) who recently defected from the Conservatives to join the pro-European Liberal Democrats. “This has been just a depressing exercise in democracy.”

And yet Thursday’s vote is very likely to reshape British politics for years to come. Whoever wins, Mrs. May or Mr. Corbyn, both are opposed to neoliberalism — the philosophy of rolling back the state and embracing globalization — which has dominated successive governments on left and right for the last 40 years.

Her fans already speak of “Mayism,” an agenda that embraces an anti-immigration stance with a broad rejection of the free market ideology of Thatcherism. “It’s time to remember the good that governments can do,” Mrs. May said when she introduced her election manifesto.

Just two years ago, when David Cameron was prime minister, the Conservative Party described a cap on energy prices, the flagship policy of the opposition Labour party at the time, as “Marxist.” Now price controls are Tory policy.

Mrs. May wants to make it harder for foreign companies to buy British businesses. She wants worker representation on company boards and has put off the date for reaching a budget surplus. Her plans, economists say, could see the tax burden rise to a 35-year high.

“She is far more radical than Labour recognizes,” said Maurice Glasman, a Labour lawmaker in the House of Lords, Britain’s upper chamber. “She wants to renew economic democracy. She is moving into that space. That is where the country is.”

Mrs. May grew up as the single child of an Anglican clergyman in Oxfordshire, and makes a virtue of not spending frivolously. She mostly does her own makeup and hair. Her biggest extravagance is her shoe collection, which receives endless commentary.

On weekends, rather than enjoying the pool and tennis court at Chequers, the official prime minister’s retreat, Mrs. May often returns home to Sonning, in her middle-class Maidenhead constituency, a 45-minute drive from London. There she goes to church on Sundays with her husband, Philip, (they have no children) and holds an office hour for her constituents on Fridays.

Mrs. May’s conservatism predates Thatcherism: She volunteered for the Conservative Party when she was 12, at a time when the party still believed in a postwar Keynesian consensus of government intervention and a notion of “one-nation Toryism,” a strand of paternalistic conservatism that dates to the 19th century.

In 2002, she gave a speech at the Conservative Party conference, warning fellow Tories: “You know what some people call us: the nasty party.”

More recently, her vision — and that of a very small circle of longstanding and influential advisers — represents a tilt from international-minded London toward Brexit-voting Middle England. “If you are a citizen of the world,” she said last fall, “you are a citizen of nowhere.”

Mrs. May has embraced the anti-immigrant stance of the right-wing U.K. Independence Party, which has collapsed after achieving its long-term goal of leaving Europe.

By borrowing so liberally from the left and the right, some say Mrs. May is a populist herself. Not, say, a Marine Le Pen of the National Front in France, but “a lukewarm Anglican version of a populist,” said Timothy Garton Ash, a professor of European history at Oxford.

But in her bid to win over the working class she has at times irked her core electorate, the elderly and the home-owning middle classes. Her most left-wing campaign proposal put a floor of £100,000 on what people of means had to pay for elder care but no cap. Nicknamed the “dementia tax,” the policy prompted such an outcry that it was discarded within four days.

The flip-flops on this and another prominent proposal — a tax increase on the self-employed, symbolized in the tabloids as the “white van man” — have led some to doubt that the “Red Theresa” image was anything more than an election ploy.

“None of this convinces me that this is a major political figure,” Mr. Garton Ash said. “I don’t buy it.”

Amid declining poll ratings, Mrs. May has sought to exploit the perceived flaws of her opponent, Mr. Corbyn, a leftist who has advocated nationalizing the rails and some other industries and whom opponents accuse of being soft on terrorism and nuclear deterrence.

When she visited the factory in Bath last week, before the London terror attack, some workers said they were underwhelmed. “She looked a bit shaky and kept saying the same things,” said Tim Moxey, 36, a machine operator. Others were more forgiving: “She has been given a hard time and I think she has handled it well,” said Howard Butchers, who said he had never voted Conservative but would this time.

David Goodhart, the author of “The Road to Somewhere,” an influential book about Britain’s values divide, said he still believed Mrs. May could dominate Britain’s political landscape for a generation — not despite her clumsy campaign, but because of it.

“She is unflashy, verging on the inarticulate,” Mr. Goodhart said. “There is something that is rather appealing to the slightly more middling times. We’ve done enough admiring of the cognitive elites and their marvelous articulacy.”

“We want something more dowdy,” he said, “because we’re a country in a dowdier mood.”