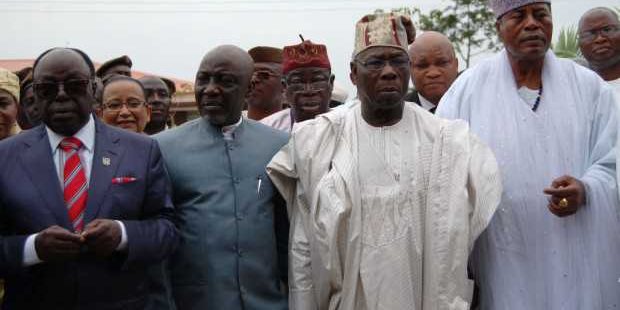 Obasanjo spoke yesterday at the maiden convocation of the Afe Babalola University, Ado-Ekiti (ABUAD), where he was given a honorary award of Doctor of Science (honoris causa).

Obasanjo said ABUAD’s founder, Aare Afe Babalola (SAN), showed that education is the best weapon for the sustenance of democracy and good governance.

At the event were the former Chief Justice of Nigeria (CJN), Justice Alfa Belgore; Ekiti State Governor Kayode Fayemi, who was represented by his deputy, Prof. Modupe Adelabu; the governor’s wife, Erelu Bisi Fayemi; a representative of Ogun State Governor Ibikunle Amosun; former Governors Ayodele Fayose and Segun Oni; the Alaafin of Oyo, Oba Lamidi Adeyemi; the Ewi of Ado-Ekiti, Oba Adeyemo Adejugbe, and the Olugbo of Ugboland, Oba Akinruntan, among others.

Obasanjo said: “I know that today, those who think Nigeria has no future will have a change of heart. This is because one person, Aare Babalola, has made a difference in education. The other time, I heard Babalola saying education is the best instrument to fight poverty. But I want to add that it remains the best instrument to sustain good governance and democracy.”

To the students, the former president said: “You have had a good beginning, having graduated from a good university, but this is not enough. You have to build on it. If you do not, the good beginning becomes nothing.”

Speaking for Fayemi, Mrs. Adelabu said the state government supported the institution with good roads, which ease access to the university.

Babalola said the institution was able to graduate students within three and a-half-years because of unusual sacrifices by workers and students.

He said: “Throughout the three and a-half-years, there was nothing like public holidays in this school, even though Nigerians are used to the idea of going on holiday. My students were not allowed to use telephones, because we viewed it as a distraction.

“I told my workers we had to set a standard and they complied, so I was marvelled when I heard that some people in the National Universities’ Commission (NUC) were asking how we did it.

“There was a period when we used to open the library till midnight and we used to close the hostels by 8pm, so that students can come out and study. We have done this through hard work and commitment and are proud of it.

Stating his determination to restore dignity to the teaching profession, the lawyer said he established the university to bequeath quality education to future generations.