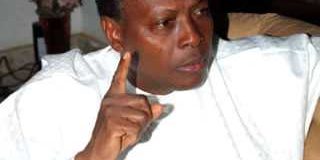 Second Republic member of the House of Representatives and Russian trained Medical Doctor, Junaid Mohammed, has declared that blood would flow on the streets of Nigeria, should President Jonathan insist on running for the presidency in 2015.
Speaking in an exclusive interview with Sunday Sun from his base in Kano, the former lawmaker, who chaired the House Committee on International Economic Relations and Socialist Bloc, argued that it was wrong for anyone to suggest that the clamour for power to return to the North in 2015, was coming from the North alone, insisting that there abound more agitators in the South-west, in this regard, than there are in the North, adding that “I can tell you today that there are more agitators in the South-west, for power shift to the North, than there are in the North. And they are doing this because they believe in justice and fairness.