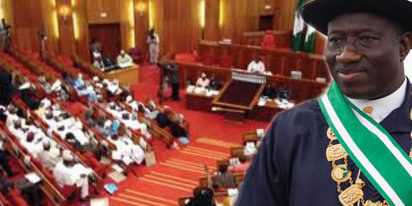 THE Senate yesterday was thrown into rowdy session following the approval of the $1 billion loan request by President Goodluck Jonathan to tackle the ongoing security challenges in the country.
Trouble started when the Chairman, Senate Joint Committee on Finance; and Local and Foreign Debt, Senator Ahmad Makarfi had recommended the approval of the request.

Senator Makarfi’s motion for the loan to be approved was then subjected to debate by senators. It was after the debate that the Senate President, David Mark put it to vote.
Although the Peoples Democratic Party, PDP senators were in the majority, the All Progressives Congress, APC, senators shouted on top of their voices and the Senate President ruled in favour of the yes. His ruling immediately provoked protests from APC senators and it took about five minutes before calm returned to the chamber.
Senator Makarfi’s Committee had stated that from the briefings of relevant stakeholders and documents received, the Joint Committee discovered that helicopters were crucial for decisive victory in the war against terror and that quick victory cannot be accomplished without helicopters.
It also noted that the number of Helicopters in the fleet of the Nigeria Air Force was inadequate for effective deployment due to lack of adequate funds for maintenance.
The Committee further explained that the requested loan was for the procurement of Helicopters, Ships, Armaments and hardware equipment and that the 12 M135 Helicopters being requested for now were appropriate for the nature of the operation and the terrain.
The Committee also informed that Belarus had accepted to give helicopters in installmental payment over a-seven year period, while other hardwares, armaments and equipment would be bought on same terms from other European countries.
The Committee in its recommendation stated, “In view of the Joint Committee’s findings, the terms and conditions of the loan agreement and the urgent need to restore full normalcy in the country, the Joint Committee recommends that the senate approve the external loan in kind of One Billion Dollars ($1b USD) to tackle the ongoing security challenges.”
President Jonathan had on July 15, 2014, a day before the senate embarked on its annual vacation requested the approval of the National assembly for external borrowing of $1 billion to tackle the security challenges.
The President in his letter stated, “You are aware of the ongoing serious security challenges the nation is facing as typified by the Boko Hrama thrat. The security situation in the North East States of Adamawa, Borno and Yobe have continued to deteriorate despite the imposition of state of emergency in the said states.
“The insurgents are purported to have carved out some local government in Borno and Adamawa states and declaring same as caliphate under their control as if it were no longer part of the territory of Nigeria.
“Therefore, the urgent need to upgrade the equipment, training and logistics of our Armed Forces and Security Services to enable them move forcefully to confront this serious security threat cannot be over-emphasised.”
Source vanguard