The “Zoo” is already Expired and destroyed from Creation:-:Attack on Jonathan: Obasanjo bent on destroying Nigeria—Ozehkome 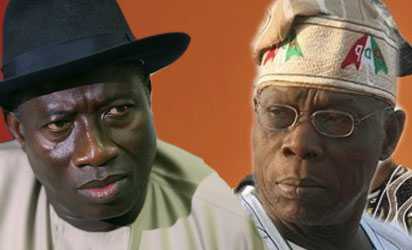 Ozehkome in a telephone interview with Saturday Vanguard, insisted that it was ex-President Obasanjo that institutionalized corruption in the country, saying he ought not be recognized or addressed as an elder statesman.

The constitutional lawyer who made these allegations while reacting to Obasanjo’s attack on President Goodluck Jonathan over his alleged ignorance and poor understanding of the operations of the Boko Haram sect, maintained that the former president acted wrongly, saying his action was a calculated attempt to heat up the polity ahead of the 2015 general elections.

He described the timing of the allegation which Obasanjo made at the public presentation of a book by the former President of the Court of Appeal and ex-Chairman of the Independent Corrupt Practices and Other Related Offences Commission, ICPC, Justice Mustapha Akanbi, in Abuja on Wednesday, as “highly suspicious”.

Ozehkome said: “I think that Obasanjo is a spoiler who does not want to sit in podium of great and revered political leaders across the world. Such action as he has taken do not behold well of a man who is suppose to be an elder statesman.

“The statement may be true and self evident in terms of executive corruption in Nigeria at all levels particularly at the Federal and State government levels, and in terms of increasing legislative rascality that we have been witnessing from the National Assembly particularly the House of Represen-tatives. “All these allegations may be true but there are certain question that need be asked. Firstly, how did Obasanjo perform as President of Nigeria?

“Was it not in his time that corruption was elevated to a doctrine and a fundamental objective and directive principle of state policy?

“Was it not during his time that Ghana Must Go bags where seen being physically carried from House of one legislator to another either to remove an existing Senate President or to perpetuate his third-term agenda.

“Was it not during his time that two major towns in Nigeria- Odi in Bayelsa and Zaki Ibiam in Benue State where mindlessly destroyed and levelled to the ground by rampaging military men in a manner that portended genocide, where many people, animals and properties where wiped out from the fave of the earth?

“Was it not during his time that Nigeria won the Gold, Silver and Bronze trophies in corruption under the Transparency International Corruption index?

“There are more decent ways and manner in which a former president can channel his grievances to a sitting president and the National Assembly, all of which are open to him without question.

“Have you ever heard of a past president of America, publicly criticize a sitting president- like Obama and take him to cleaners especially in a way and manner that situate the country in very bad light before international circles?

“I disagree with Obasanjo’s penchant for either public letter writing or infamous statements in a way and manner that can cause tension, fear and scaremongering among the Nigerian populace. It is not helping to re-engineer Nigeria at all. Rather, he is helping in every way possible to disintegrate it.

“Did he not say much earlier that he could meet the Boko Haram leaders to stop the mindless holocaust against Nigeria? As a former president, did he require any presidential nod to help Nigeria?

“To me, the timing is also suspicious as every one knows that there is no love-lost between his former protégé, President Jonathan, and the National Assembly. Having said this, in order not to miss the message by going after the messenger, I will call on president Jonathan to immediately tackle the state of insurgency with military alacrity as the Commander-In-Chief of the armed forces, and attack corruption frontally so that it will not become the facetted monster that devours its creator.

“If we do not kill corruption now, corruption may kill us all. As for the National Assembly, I also advice them to keep there art together and engage more in legislative activities than in politicking between PDP and APC, all of which do not add value to our democratic experimentation or put food on the table of Nigerians.

“The nation is witnessing too much of politics and politicking at the expense of real governance”, he added.