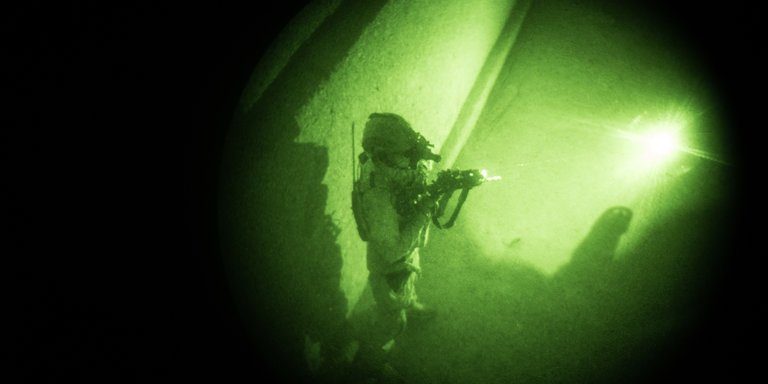 WASHINGTON — Once described as an ill-equipped band of insurgents, the Taliban are increasingly attacking security forces across Afghanistan using night-vision goggles and lasers that United States military officials said were either stolen from Afghan and international troops or bought on the black market.

The devices allow the Taliban to maneuver on forces under the cover of darkness as they track the whirling blades of coalition helicopters, the infrared lasers on American rifles, or even the bedtime movements of local police officers.

With this new battlefield visibility, the Taliban more than doubled nighttime attacks from 2014 to 2017, according to one United States military official who described internal Pentagon data on the condition of anonymity. The number of Afghans who were wounded or killed during nighttime attacks during that period nearly tripled.

That has forced American commanders to rethink the limited access they give Afghan security forces to the night-vision devices. Commanders now worry that denying the expensive equipment to those forces puts them at a technological disadvantage, with potentially lethal consequences.

For years, American commanders have been reluctant to give night-vision equipment to rank-and-file Afghan soldiers and police officers out of concern of widespread corruption among those forces. The devices — headsets and infrared lasers — are usually given only to elite Afghan commandos and police special mission units, according to American military officials.

As some of this equipment falls into Taliban hands, the militants are joining a larger trend, said David W. Barno, a retired lieutenant general who led the war effort in Afghanistan from 2003 to 2005. Advanced equipment, such as drones and precision weapons, is being seized by other extremist groups in other global conflict zones, he said.

With the spread of the devices, infantry units on patrols have been told not to use certain marking devices that can be seen only by night-vision equipment. Helicopter crews have been made distinctly aware that their aircraft are no longer cloaked by darkness.

In one case last November, Taliban fighters wearing night-vision goggles attacked a police outpost in Farah Province, in western Afghanistan. By the time the predawn assault was over, eight Afghan officers lay dead in their beds, Haji Abdul Rahman Aka, the elder of the province’s Pule Regi area, said at the time. Only one Afghan officer survived.

The frequency and ferocity of the nighttime Taliban attacks are linked to attempts by Afghan forces, based in small checkpoints across the country, to hold territory that has been wrested away from the militants.

Previously unreported documents, obtained by The New York Times, underline concerns about the Taliban’s growing sophistication on the battlefield after 16 years of war — and American commanders’ efforts to stunt it.

The documents show that the American military has begun to send older models of night-vision hardware to regular Afghan Army units. Those headsets cost an estimated $3,000 each, officials said.

One of the first batches of night-vision equipment for conventional units in southern Afghanistan, part of a monthslong pilot program, was sent to the embattled 215th Corps in Helmand Province in the spring of 2016.

Only 161 of the 210 devices were returned, according to the military documents obtained by The Times, and the equipment was not effectively used, in part because the forces were not properly trained to use it.

Afghan troops said the missing devices were reported as “battle losses,” but could not support that claim with any proof or records to explain where or when they were left behind, according to the documents.

At the time, the commander of the 215th Corps was Maj. Gen. M. Moein Faqir. He was later arrested on sweeping corruption charges that included misuse of food money meant for his troops.

Last year, and with better results, night-vision equipment was sent to the 205th Corps, located around Kandahar, the military documents showed.

Five devices were lost between July and December, when the program ended, according to the documents. Over the summer and fall, the Afghan National Army suffered 15 percent fewer casualties around Kandahar than it had during the same period in 2016.

The documents credited the night-vision equipment for the marked reduction, concluding that the devices are “becoming an integral part of base defense plans.” The American military is now planning to equip the unit with roughly 2,500 night-vision goggles as part of what the documents described as a concept for a “permanent program.”

Despite those measured successes, it remains unclear if the American military will give the devices to the rest of the Afghan Army.

The American military headquarters in Kabul has said it equips only Special Operations units in the Afghan Army and police forces with night-vision technology.

Capt. Tom Gresback, a spokesman for United States forces in Afghanistan, declined to comment on the plans to distribute the devices to the Afghan National Army, as outlined in the military documents. He said American commanders would provide Afghan national defense and security forces “with the resources necessary to promote security throughout Afghanistan.”

But some American advisers closer to the ground fight are already trying to get the technology for their Afghan counterparts, according to a United States official. He said that would require a decision made through the leadership in Kabul and the Pentagon to allow American commanders to distribute the devices to even more Afghan security forces.

With the night-vision devices, Taliban fighters have been able to approach Afghan bases nearly undetected before attacking.

Initially, such ambushes were attributed to Taliban forces known as “Red Units” located in Afghanistan’s southern provinces. But over the last year, the night-vision devices have frequently turned up in the country’s north and east, according to two American military officials, signaling a widespread distribution into other groups of Taliban fighters.

Those officials said the Taliban were using both tightly controlled American-made devices and gear that is widely available for purchase. In some cases, American officials said, the equipment was left on the battlefield by United States or Afghan troops, including those who were killed in action.

In others, Afghan soldiers are believed to have sold the devices to the extremists.

That was disputed by Gen. Dawlat Waziri, who until recently served as spokesman for the Afghan Ministry of Defense. He said all night-vision equipment provided to Afghan troops by the American military had been “accounted for.”

“No case of night vision sold by our soldiers to the Taliban has been reported,” General Waziri said.

Rank-and-file Afghan police officers are particularly under threat by increasing numbers of deadly nighttime attacks, said one of the American military officials. Those units are spread farther into sparsely populated areas across Afghanistan than are army soldiers.

Officers with the Afghan National Police, especially in the south, have been making desperate requests for the equipment for months, the official said. The police are part of the Ministry of Interior, which is suspected of rampant corruption.

In Helmand Province, Marine Corps advisers are helping a request by the 505th Zone of the Afghan National Police to receive night-vision devices, Col. C.J. Douglas, the head of the Marines’ police advising component there, said in an email.

It is unclear if the Afghan police unit will get them.

A version of this article appears in print on April 1, 2018, on Page A1 of the New York edition with the headline: Taliban’s Move Into High Tech Puts U.S. in Bind. Order Reprints| Today's Paper|Subscribe