The Saturday Profile: In Homogeneous Japan, an African-Born University President 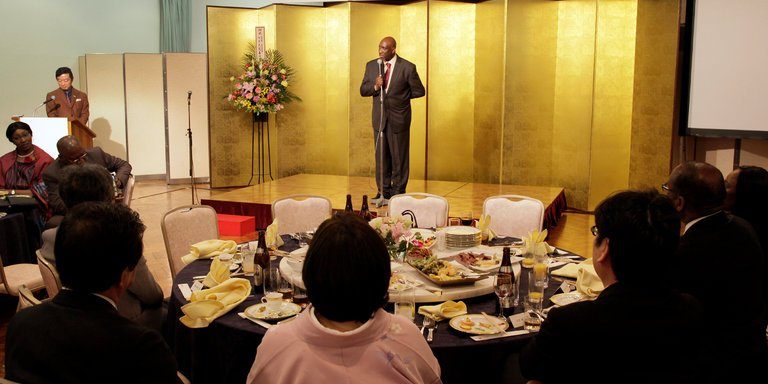 KYOTO, Japan — On a beautiful spring Sunday during cherry blossom season, the new president of Kyoto Seika University welcomed students for the start of the Japanese school year. “You have left your home,” he told the 770 first-year and graduate students gathered in a gym on the hilly campus. “But this is also your home.”

In Bamanankan — the lingua franca of his native Mali.

And so Oussouby Sacko, 51, quickly dispensed with the elephant in the room: He is a black man in a homogeneous country that has long had an ambivalent relationship with outsiders.

Dr. Sacko, who is believed to be the first African-born president of a Japanese university, segued elegantly into fluent Japanese, invoking Hannah Arendt, Edward Said, Eleanor Roosevelt and the Malian writer Amadou Hampâté Bâ. The university, Dr. Sacko said, was “diversifying and internationalizing,” and he wanted the students to “recognize your difference from others.”

In this island country that is sometimes less than welcoming to immigrants, Mr. Sacko is an outlier. A resident for 27 years, he obtained Japanese citizenship 16 years ago and worked his way up through the ranks of a Japanese institution.

With a declining population, Japan is being forced to confront its traditional resistance to taking in foreigners. Last year, according to government figures, the number of foreign nationals living in Japan hit a record high of more than 2.5 million, with about 15,140 of them from African countries.

Yet that total number of foreign nationals makes up less than 2 percent of Japan’s population of 127 million, a lower proportion than in South Korea, for example, where foreigners make up about 3.4 percent of the population. The share is much higher in the United States, at 14 percent, and it is close to 40 percent in Hong Kong, according to data from the United Nations Department of Economic and Social Affairs.

Obtaining Japanese citizenship is extremely difficult. Since 1952, just over 550,000 people have managed to naturalize as Japanese citizens, most of them ethnic Koreans whose families have lived in Japan for several generations since the colonial occupation of Korea.

And despite recent efforts to allow highly skilled foreigners to obtain permanent residency more quickly, Prime Minister Shinzo Abe has declared that he will not relax immigration policy to address the country’s falling population.

Dr. Sacko says he believes Japan needs to allow in more outsiders, simply as an act of self-preservation.

“Japanese people think they have to protect something,” he said during an interview in English before a reception recently to celebrate his appointment. But, “someone who has a broad view from outside on your culture can maybe help you objectively improve your goals,” he said, occasionally interrupting the interview to greet his guests, switching effortlessly between English, French and Japanese.

Dr. Sacko, the eldest son of a customs officer and homemaker, grew up in Bamako, the capital city of Mali. A strong student, he won a scholarship from the Malian government to attend college abroad.

He had never been anywhere other than the neighboring country of Senegal. With 13 other students from Mali, he was assigned to study in China and landed in Beijing in 1985 to study Mandarin before embarking on a degree in engineering and architecture at Southeast University in Nanjing.

On a vacation to Japan after obtaining his undergraduate degree in 1990, Dr. Sacko found himself enchanted by what he observed as strong community ties and the hospitality toward guests. Although he had begun graduate studies in China, he was frustrated that a government minder always shadowed him when he conducted field research in local villages.

He had also met and started to date a Japanese woman, Chikako Tanaka, whom he later married and with whom he has two sons.

Dr. Sacko moved to Osaka, Japan, for six months of language lessons before enrolling in a master’s degree program at Kyoto University. In meetings with colleagues, he was often asked to take minutes, which helped him improve his listening comprehension and writing ability. At night, he watched Japanese television shows and socialized with Japanese classmates.

His dedication to becoming fluent distinguished him from other foreigners. “They said, ‘If you speak Japanese, they will put you in meetings and on committees and that’s not interesting,’ ” he said. Many foreigners, he added, “spend too much time among ourselves.”

Dr. Sacko said he had hoped to return to Mali someday, but after a military coup in 1991, his employment options were limited. As he pursued a doctorate in Japan, he worked to understand a culture where people can say the exact opposite of what they mean. “You don’t always catch things from the meanings of the words,” he said. “You have to go deeper.”

Along the way, there were some misunderstandings.

After hosting a few parties at his apartment, his neighbors remarked that he and his friends always seemed happy and that they were envious. Dr. Sacko urged them to join his next party.

Instead, they called the police.

He applied for a job at Kyoto Seika, which specializes in the arts, and started as a lecturer in 2001. Colleagues say that over the years he has worked very hard to adapt to Japanese social codes while also retaining his own sensibility.

“He deeply understands Japanese culture and the way of thinking,” said Emiko Yoshioka, a professor of art theory whom Dr. Sacko appointed as vice president at Kyoto Seika. “But he also is able to poke fun at the fact that he is a foreigner.”

The faculty vote for president was extremely close, with Dr. Sacko winning by just one vote. At his inaugural reception, a group of musicians played Malian music on a patio, and Dr. Sacko stood quietly on a small stage during a parade of speeches from the mayor of Kyoto; the Malian ambassador to Japan; and various academic colleagues, including a professor from Kyoto University who repeatedly slipped up and called him “Professor Mali.”

Ryo Ishida, chairman of Kyoto Seika’s board, noted that the university had recently started a campaign to embrace diversity.

“But I don’t think his election was much to do with the university’s promotion of diversity,” Mr. Ishida said. “He was elected as the best leader of the university among his colleagues.”

In a practical sense, Dr. Sacko’s appointment could help Kyoto Seika appeal to more foreign students at a time when many universities across Japan are struggling to maintain enrollment.

Already, 20 percent of its student body comes from abroad, much higher than the 4 percent overall ratio of foreign students in Japanese higher education. Dr. Sacko said he hoped to raise Kyoto Seika’s level to 40 percent within a decade.

“I think he will help shrink the distance between Japanese and foreigners,” said Chihiro Morita, 18, an illustration major from Hyogo Prefecture.

Other black residents of Japan said that Dr. Sacko could help improve race relations in a country where performers still appear on television in blackface.

“The fact that he has been placed in such a prominent position will have a significant impact on how we’re perceived,” said Baye McNeil, a Brooklyn-born black columnist for the English-language Japan Times who has lived in Japan for 13 years.

Dr. Sacko said he had not experienced racism in Japan but said he was treated differently simply because he does not look Japanese. Despite his Japanese citizenship, for example, he says he is automatically routed to lines for foreigners at the airport when he returns from trips abroad. “It’s not because you’re black,” he said. “It’s because you’re different.”

He said he considered it his mission to foster differences beyond race. When recruiting Ms. Yoshioka as vice president, he told her he wanted her for the job because she was a woman and a single mother.

“If we don’t have a person like you in the top administration of the university, the board will just be filled with men,” he told her when she first hesitated to take the job. “And that doesn’t fit my vision.”