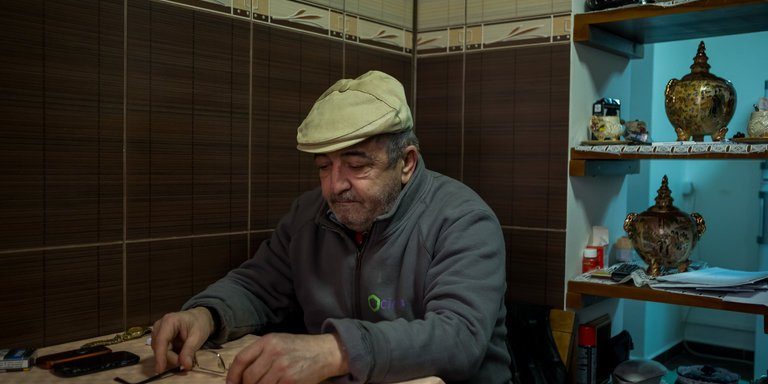 Being Dead, He Learned, Is Hard to Overcome

BARLAD, Romania — Reliu Constantin hadn’t been home in almost 20 years. His family had not heard from him in all that time, and he hadn’t sent any money back. All efforts to locate him in Turkey, where he had gone for work, had been fruitless.

Under the circumstances, it seemed entirely reasonable that his estranged wife asked a Romanian court to declare him legally dead. A death certificate was issued in 2016. The only problem was that Mr. Constantin was very much alive.

But that was just the beginning of Mr. Constantin’s troubles, as he discovered when he finally returned home in January. In a plot twist straight out of a Kafka novel, a different Romanian court this month refused to overturn his death certificate, leaving him in legal limbo, between life and administrative death.

“I am officially dead. I have no income,” he said, sitting at a kitchen table in a dingy Communist-era apartment block in the eastern Romanian city of Barlad. “I spend my days going back and forth between governmental agencies, the police station, the courts. I have diabetes, without papers I can’t go for a medical checkup.”

His apparent return from the grave was also hard for friends and family. His mother was hospitalized for three days with shock after seeing him. One old acquaintance almost fainted when he walked up to her. “Reliu, is it really you?’’ she said.

His daughter Luiza, now in her late 30s and living in Spain, reproached him for being absent from her life for the last 20 years. “Do you know what I’ve been through? I have three kids,” he says she told him.

Reached by telephone in Spain, she politely declined to comment.

Mr. Constantin returned to his native Romania in January after being deported from Turkey, where the authorities discovered he had been living illegally for almost two decades.

He had gone to Turkey in 1992, initially working on a building site and then as a cook. At first, he returned every few months, and he sent money back to his wife and young daughter. But in 1999, during a visit home, he decided to leave for good.

In Mr. Constantin’s telling, his was an acrimonious and unhappy marriage, with infidelity on both sides. During that last visit home, his wife was drinking heavily and a man turned up on his doorstep around midnight.

His wife, who now lives in Italy, did not respond to repeated attempts to reach her.

“I cut off ties with everyone, as I didn’t want them tracking me down,” he said about family and friends in Romania. “I knew it was hard for my daughter, but I felt it would be better for her.”

After a 7.6-magnitude earthquake struck Turkey in August 1999, resulting in an estimated 17,000 deaths, those in Romania who knew Mr. Constantin wondered if he had been among the dead.

It wasn’t until 2013, after not hearing from her husband for 14 years, that Mr. Constantin’s wife asked a court to declare him dead. With family and friends testifying that they had not heard from him since 1999, and the Turkish Interior Ministry saying they had no record of him for that period, the Romanian court concluded that he was most likely dead.

His death certificate was issued in May 2016, with the year of death listed as 2003, the same year his passport expired.

Mr. Constantin, who was living in Istanbul at the time, was oblivious to all of this. When the authorities detained him, he was told that his case was classified and that he would never be allowed to return to Turkey. It was only upon landing in the Romanian capital after 26 days in Turkish detention that he was told he was legally dead.

“At the airport in Bucharest, I was surrounded by customs officials. They said, ‘You’re dead,’ ” he recalled with disbelief. “I thought they were joking. I was the only one who didn’t know. The people who escorted me off the plane knew, everyone knew except me.”

For the next six hours, he was questioned about his hometown — where the schools and factories were, details about his family, including dates of birth. Finally, he was released.

But he was still not in the clear, even with temporary documentation from the Romanian Embassy in Turkey that had allowed him to return home.

Sitting in the apartment he once shared with his wife and daughter — it was empty when he returned — Mr. Constantin described the frustration of waiting months for the Romanian authorities to legally bring him back from the dead.

“I’m a living ghost,” he said, chain smoking cigarettes and occasionally pacing around the apartment. “My daily routine has been waiting around, going to fix my mother’s bandages, going to check with the tribunal to see if anything has changed.”

The legal status of the apartment is a bit of a mystery in itself. Mr. Constantin paid for it, but his wife presumably took full ownership after he was declared dead. Whether he would regain co-ownership if the death certificate were annulled is unclear.

The last months have been challenging for Mr. Constantin. The money he brought with him from Turkey is long gone, and he survives on handouts from family members. He cannot get work without a valid ID.

Since his case began drawing international attention, Mr. Constantin has been swamped with interview requests, which he has mostly ignored. “There has been no benefit from all the media attention,” he said. “The only benefit is all of the journalists are getting paid.”

Meanwhile, he waits, and because the court’s decision was based on procedural grounds, legal experts say, he has a reasonable expectation that the death certificate will eventually be annulled.

Mr. Constantin was the victim mostly of poor legal advice, trying to appeal the court’s decision to declare him dead, even though the time limit for an appeal had passed. He also applied to a different court than the one that had issued the declaration.

“The court didn’t rule on the merits of the claim but rather on procedural grounds,” said Catalin Alexandru, a partner at the Bucharest law firm Pelifilip, adding that Mr. Constantin could file an annulment claim that is not subject to a deadline. “I can’t see why, on merit, he wouldn’t be successful,” he added.

Paradoxically, a week after the decision in Mr. Constantin’s case, a different Romanian court announced that a man who died in October should have his driver’s license returned, and be reimbursed for a fine he had paid, after his conviction for speeding was overturned.

For Mr. Constantin, the news media attention may have had one upside: A lawyer offered last week to help him on a pro bono basis. His previous lawyer failed to show up in court, Mr. Constantin said.

“If you don’t have anyone to help you, it is quite difficult to annul a decision of the court,” said Cristian Calinita, the new lawyer, adding that he had sent the required documents for Mr. Constantin. “Once it is registered, it should be about two weeks to be solved. It is urgent, as until it is resolved on paper he is a diseased man.”

Even if he is released from his state of purgatory, Mr. Constantin is unsure what his next steps might be. Despite being told he can never return to Turkey, he still holds out hope.