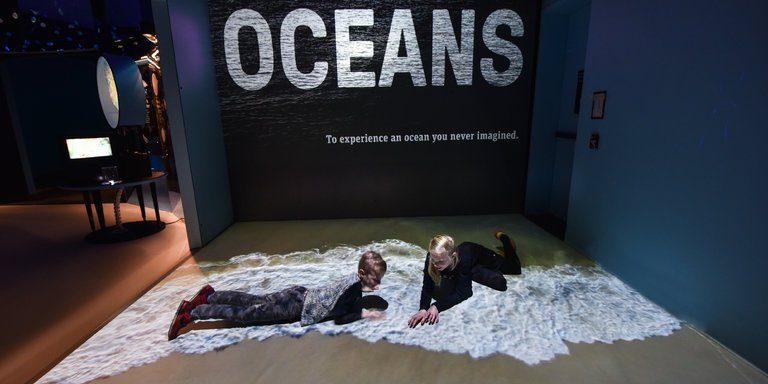 Take the first step into “Unseen Oceans,” the new exhibition at the American Museum of Natural History, and you are bound to be tickled and enticed by the appearance of sand and surf beneath your feet.

It’s only video projected onto the floor, a simple enough technique, but I was sorely tempted to take off my shoes and wiggle my toes in the illusory foam. If I were to bring little ones to the exhibition, I’d keep an eye on their footwear. Promise them that if they keep walking there will be real sand that they can touch with their hands.

The exhibition is, of course, about hidden ocean wonders, but it features more than the usual suspects of blue whales and frighteningly enlarged microscopic plankton. The technology that allows scientists to uncover what the museum is showing its visitors is emphasized as well.

It also highlights who discovers these wonders, and how and why they do it. Ocean research is presented not as the work of a distant scientific elite, but of people who, to take one example, grew up tinkering with an auto-mechanic father, and later figured out how to add sophisticated acoustic equipment to a small submarine called DOR-E.

That researcher, Kelly J. Benoit-Bird, is featured in one of the “Meet the Scientist” nooks.

One of the smaller wonders is presented in a vastly enlarged model along with its horrific and compelling life story. The creature is Phronima, a miniature carnivore ranging from half an inch to almost two inches long. When it is time to reproduce, a female Phronima bores into the body of a salp, a gelatinous translucent sea animal, and hollows it out into a barrel shape that it inhabits with its young. It drifts along, drawing food from seawater, overseeing its brood until they are ready to leave the nest, or barrel, or salp remnant. The female looks enough like the monster in the “Alien” movies that people have speculated that this scrap of zooplankton inspired its design.

For those who prefer beauty to horror, vast blue whales circle a wall screen in full-size video animations. And if you like weird and appealing, the Mola mola, or ocean sunfish, makes a similar appearance.

Yet, as this show proves, there is always more to discover. Anyone who loves the water knows the thrill of breaking the surface to enter a different world. And snorkeling or scuba diving reveals all sorts of life that reacts to you with near indifference. If you dive at night, for instance, and shine a light on a reef, there are stunning displays of fluorescence.

And if you go to great depths you find even more. Scientists like John Sparks, who curated the exhibition, are now finding that these phenomena are even more common than originally thought. One section focuses on fluorescence, found so far in more than 200 species of fish. Even sea turtles display it. Here, there are live animals showing off their colors — eels, scorpion fish, pipefish, green-patterned chain catsharks and red seahorses.

Older children can sit in a model submersible, or play a kind of video game in which they drive the submarine around the ocean floor. And younger ones can actually reshape that floor in a sandbox lit to make some of the sand seem beneath the ocean surface. You can raise islands or destroy them.

Some of the technical leaps that allow investigation of the oceans are high tech, like the submersibles, spheres with large acrylic windows in which you can dive thousands of feet deep. Advances in sonar and lasers allow scientists to better map the ocean floor, the details of which are largely unknown and unexplored.

Parts of the ocean are so remote it is hard to imagine them. The Pacific’s Mariana Trench, the deepest part of any ocean, is in the hadal zone (for Hades, the underworld). The deepest part of the trench, seven miles down, is called the Challenger Deep. Only three humans have visited it, fewer than have been to the Moon.

The ocean that is glimpsed in this show is largely still to be explored, but, as the exhibit notes at the end, it is threatened in many ways by climate change and other environmental insults. The ocean is becoming more acidic, which threatens some plankton. Warmer seas and acidity are implicated in killing the algae that live with corals, creating bleached, dead reefs. Overfishing threatens many species. All the more reason to learn as much as possible about the oceans now.

Although I am usually partial to biological wonders, my favorite part of this exhibit was the technology under development, such as the soft fingerlike grippers that researchers are developing so scientists in a submersible or remotely operating one can take hold of objects and living things without damaging them. This particular project is a joint effort of Harvard and the City University of New York. The group that does this work is called the Squishy Finger/Soft Robotics for Delicate Deep-sea Marine Biological Interactions team. The title itself is an unseen wonder.

My favorite story of technological innovation in the exhibition involves attaching tags to sea creatures to track their movements. Attaching such tags always presents challenges, like how to get them to stick and not interfere with water flow as a whale swims.

But what about tagging a jellyfish? Researchers tried quite a few different ways to stick a tag on amorphous, fragile jelly. The solution was an inexpensive glue that veterinarians use to help small cuts on animals heal. According to the show, the battery for such a tag is “now the size of a piece of Trident gum.”

Of course, I have to say that I really liked sitting in the model submersible and playing the submersible video game too. It’s a good thing my children are older now. It would be bad enough to have my kids be the ones to tell me to put my shoes on. How embarrassing if a museum official had to order me to give the kids a turn.

A version of this article appears in print on March 23, 2018, on Page C20 of the New York edition with the headline: This Puts an Octopus’s Garden in the Shade. Order Reprints| Today's Paper|Subscribe