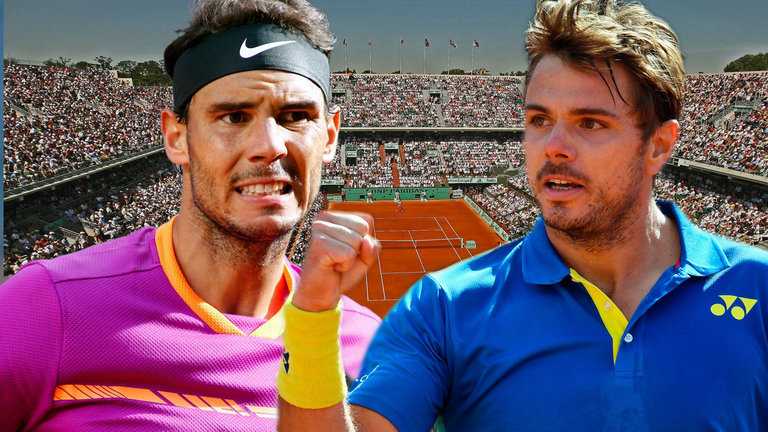 We’ve asked our panel of experts whether Stan ‘The Man’ Wawrinka can stop ‘King of Clay’ Rafael Nadal from winning a 10th French Open title on Sunday.

Nadal is yet to drop a set and has lost just 29 games in six matches – his lowest tally ever and the least since Bjorn Borg in 1978. Now only Wawrinka stands between the 31-year-old and another record as the first man to reach double digits at a single Grand Slam. So what do the experts think…

How is Stan going to beat Rafa?

He will have to recover from his five-set epic against Andy Murray, but I think he can do it. If this was tough against Andy then it will be as tough physically against Rafa. In terms of physical shape Rafa has the edge but in terms of his temperament he certainly ticks that box having won all three finals that he’s been in. My fear is the way Rafa plays with the amount of spin that he puts on the ball and the fact that he’s a lefty. I think it makes life a little uncomfortable for Stan.

I don’t think Stan will be able to fire as many winners past Rafa. He will have to play a little further back, but of course, it will be interesting because the forecast is for hot weather in Paris so the ball will bounce higher, which for me favours Nadal. Wawrinka likes the heavier conditions which allows him more time and I believe he will come forward a lot more which will be imperative against Nadal. It’s unrealistic to have to keep going close to the lines to hit winners. He has to come forward and finish points off at the net.

He can only control the things that he can control so obviously he has got to serve well. He’s got to serve tight to the lines and he’s got to find a way to get width to his serves so that he gets Rafa off the court, and then he’s got to go huge with his first shot after his serve. He’s got to try and create space, so although he doesn’t necessarily have a great drop shot, he may have to try and find a way to use that because if he gets into any rally over four or five shots on a clay court you’ve got to feel Rafa is going to be too good.

I think that he probably isn’t but if he can come out and start the match on Sunday as he finished against Murray then he has as good a chance as anybody and he could certainly do it. I think it will be an exciting final, although I don’t know how much the semi-final against Murray would have taken out of him, but he’s pretty strong. He’s certainly going to be able to play three good sets and then who knows what.

He hasn’t been tested. He’s breezed through the tournament and it was a little disappointing against Dominic Thiem. Wawrinka cannot drop his edge at all because Rafa is someone who senses if this is his moment he will absolutely strangle you.

That’s the biggest problem going forward because obviously Stan likes to chip the first serve return, and over the years as we’ve seen anytime you put slice on the ball or you chip it Rafa just wins the points. Between himself and coach Magnus Norman that is going to be a big decision for them in terms of where does he stand to return the first serve of Nadal. Obviously, he’s going to drop deep on the second serve and try and take big swings before shifting himself up towards the baseline, but off the first serve – that’s going to be the biggest dilemma. The two keys are the first-serve percentage and first-serve return from Stan.

Nadal is certainly hitting the ball harder than Murray but Stan can break anybody. He can string three or four shots together and that’s the break so more crucial to him is limiting his unforced errors. He made a lot against Murray, but then in the middle of the fourth set he stopped making them and that was the difference.

Is this Rafa’s to lose?

Rafa’s the best player. He’s dominated the clay-court season and I said at the beginning of the tournament he’s playing his best tennis since 2013. But what Stan will be saying and what his coach Magnus Norman will be saying is that Wawrinka likes being the underdog so he needs to go out there try and worry him and play his game. If it’s tight Stan is brave so he’ll have no problem with it going to five. Something tells me that if he takes it five he might win.

It’s definitely Rafa’s to lose because basically if he plays solid, good depth tennis then the onus is on Stan to hit clean winners. There are very few players who can hit the kind of clean winners without an increased number of unforced errors on a clay court. Stan has the power, but the ratio will be too even if he plays casino-style tennis, and even if he’s even, I don’t think that’s going to be good enough. He’s going to have to have a plus 15 kind of ratio from winners to unforced errors to stand any chance of winning the match.

He’s the greatest clay court player of all time and he’s playing just about as well as he ever has. I find it astounding to say that but during this tournament especially he’s looked like vintage Rafa.

I think Rafa will start well and he will get ahead. Wawrinka will chase, which he likes doing, but if you chase you can often have a letdown. Nadal might win the first set, Wawrinka might win the second, but Nadal might just win the third and fourth. Or I think Nadal will just be able to win in three.

The reality is, when you look at Rafa’s record at Roland Garros, he hasn’t lost a match when he’s won the opening set. That first set is absolutely crucial. If Stan doesn’t win the first set then it’s very hard to see a way for him to win it. But Wawrinka is 4-0 against world No 1s at Grand Slams so he’s obviously got the big match temperament so he’s got that in his favour.

I would say Nadal. I don’t know if it will be in three or four but I think Rafa is going to win. I would certainly tune in to see because that’s why sport is so fantastic – you just never know.

For those on the move, we will have the French Open from Roland Garros covered via our website skysports.com/tennis, our app for mobile devices and iPad, or follow our Twitter account @SkySportsTennis to join in the conversation. Who will win the French Open men’s final? Have your say…