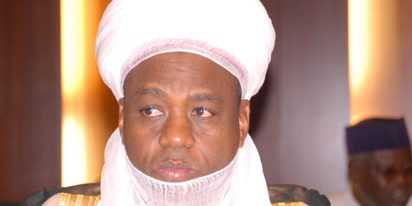 The Sultan of Sokoto, Alhaji Sa’ad Abubakar III, yesterday, called on Nigerians to unite and fight the common enemies of the nation, saying it did not include shedding of human blood.

Sultan Abubakar stated this at the first Inter-Faith Health Summit, organised by the Nigerian Inter-Faith Action Association in Abuja.
He said though leaders of faith in the country were determined to make their contributions towards improved health of the nation’s population, especially the children, such a dream would only be achieved in a peaceful atmosphere.

The revered leader of the Muslim faith in the country also condemned media reports hyping negative stories about Nigeria, especially as it related  to the World Economic Forum on Africa  which took off in Abuja, yesterday.

He said:  “There are many good things happening that require that the world come together. And, Nigeria is playing the role very well. You can see how we (leaders of faith in Nigeria) relate with one another; we meet personally; we attend functions together.

“For the problem of insecurity, what we must do is to come together as one body to fight terrorism at all levels. Terrorism does not know who is a Christian or who is a Muslim. When terror strikes, we all see what happens; Muslims are killed, Christians are killed. Even those who do not possess any religion are killed.

“What we need to do as leaders at all levels is come together to defeat terrorism. We plead with our foreign partners, disperse the message that we need you to come together with us  so that we bring to an end the insecurity issues facing our country.”

On the need to promote religious tolerance in the country, the Sultan urged: “I want to assure you, we (Muslims) are not at loggerheads with anybody in this country. What Muslims want is to live their lives according to the Islamic dictates, without any hindrance and without any let up.”

In his remarks, President, Christian Association of Nigeria, CAN, Pastor Ayo Oritsejafor, reiterated the  commitment of leaders of faith in the country to help improve the health of the citizenry, particularly children.

Pastor Oritsejafor noted that Nigerian children were suffering; and that they deserved better attention from both government and relevant stakeholders.

“We are not public health experts, but we know our people. We don’t ask for resources from international donors and the Ministry of Health because we are nice people who somehow deserve a role; we ask for resources to play our part because we know that it works; we know it works.”

“We wish people in need in every nook and cranny, every dusty road in the city and in every rural village. We know our people and they trust us. Such role we do not take for granted,” he said.