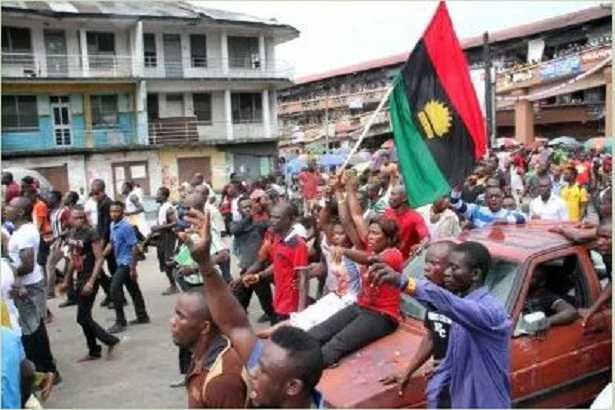 Gathered under the aegis of Indigenous People of Biafra, IPOB, Delta State chapter, the protesters, mainly women, demanded the immediate release of Kanu, describing his arrest as uncalled for and totally unacceptable.

The Indigenous People of Biafra on a Peaceful Protest over the Arrest of the Director of Radio Biafra Tuesdaay along Ikwerre road in Port Harcourt, Rivers State. Photo: Nwankpa Chijioke

Chanting songs of grievances and displaying placards which bore various inscriptions such as “Freedom for Biafra, free Nnamdi Kanu”, “We are not terrorists, we are freedom fighters”, “We are tired of intimidation and harassment by Nigeria Government”, “Biafra on the move” amongst others, the protesters said they were no longer comfortable with the Nigerian government.
Speaking during the protest, Secretary of IPOB, Delta State chapter Nnenna Nwaoha, said: “The reason for the protest is for Nnamdi Kanu to be released; we have suffered enough in the hands of the Nigerian Government and we are no more comfortable with it.

Also speaking, Chineye Udeoba expressed bitterness at the detention of Kanu, saying “we are bitter and we are giving them a strict warning and order to release him.

“We are not Nigerians, we are Biafrans. My father is seventy-two years old and he is older than Nigeria. He is a Biafrian, I am a Biafran and we all here are Biafrans. We the indigenous people of Biafra are ready to go. We want to be on our own.

“The British came and amalgamated us with these Oduduwa and Arewa people, we are not one; we were never one, we are totally different in terms of tradition; we are Biafrans. We want to be on our own as indigenous people of Biafra. We want our freedom.

On her part, Mrs. Judith Ihebiehi said: “This man is our voice, he is our mentor. We have been in darkness all these while, so this man has been speaking for us, so the Nigerian government has no right to detain him; he has done nothing.

“Our reason of coming here is to tell the Governor Ifeanyi Okowa to help us take our message to the federal government. He is not the one detaining him but we are here to tell him to take it to Abuja.” The protesters were however, denied entry into the Government House by police officers