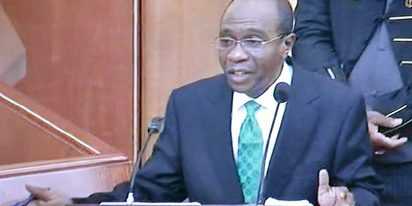 NIGERIA’s next governor of the Central Bank, Mr. Godwin Emefiele, yesterday,  promised to review the past expenditure profiles of the nation’s apex bank to find out why it ran a budget deficit of N266 billion in 2013.

Emefiele, who was confirmed by the Senate after being screened for about two hours also unfolded his plans on how to grow the economy. He said the CBN under his watch will adopt development banking model.

During the confirmation hearing, yesterday, Senate President, David Mark, gave a stern warning to senators who were in the habit of

hobnobbing with nominees before screening and confirmation to desist from it to protect the sanctity of the Senate.

The Senate had explained that the reason behind the confirmation of the CBN Governor before the expiration of the incumbent governor was to ensure that there was no lacuna.

While fielding questions from senators at the Committee of the Whole, the CBN governor- designate said he would probe into the various expenditure components of the bank to know how exactly the deficit became inevitable.

“This is because those were the expenditures that were incurred  in the course of open market operation which is needed to ensure that we maintain a strong currency and ensure that we continue to have a good country.”

On the issue of high target to bank staff, he stated that there was nothing wrong with the target even as he said that in any establishment, there was always a target which he said always led to promotion, though he was silent on the issue of immorality that the target normally leads to especially among the female staff.

Dollarisation of the Nigerian economy

His words: “On the issue of dollarization of the Naira, I think one of the core mandates of the CBN is to ensure that we maintain a legal tender and respect it and ensure that whatever is done, our Naira has to be used as a legal tender. I will take it as a primary responsibility to ensure that the attempt to dollarize the Nigerian economy is discouraged. We should not allow it because it will create problems for the economy.”

He, however, assured the Senate and Nigerians at large that if approved, his own regime as the CBN governor would not spend any money in contravention of the law.

Emefiele noted: “The core mandate of the CBN is to achieve monetary and price stability, ensure strong exchange rate and build foreign reserves. We will ensure that we have a sound financial system in Nigeria.

During my tenure, whatever monetary policy decisions we take will be those that will lead to the improvement in the level of employment in Nigeria because employment is very crucial to national development.

“The CBN and all stakeholders in the economy will play a central role towards ensuring that we grow the Nigerian economy in a stable environment. We will do this through the adoption of the development banking model that had been tried and tested in different jurisdictions in the world.

On the issue of the cashless economy introduced by Mallam Sanusi Lamido Sanusi, he said, “The cashless policy is one that we consider very good and important because all nations of the world today are embracing electronic banking as an electronic channel for doing business.

“Nigeria being a very important country in the comity of nations should also embrace the cashless regime. We are going to look at part of the policy that has to do with penalty being imposed on excess withdrawals.

“We will review it to ensure that we mop up all the cash which are outside into the banking system notwithstanding the limit but we will encourage people to make sure that they embrace the electronic form of doing business. Then we could say that when making withdrawals, you should pay something to encourage you to embrace the electronic form of doing system. We will look into that and make it better.”

Also speaking on devaluation of the currency, he said, “it is true that we have seen the reserves dropping, it is as a result of speculative attack on the naira because people think that there will be devaluation as a result of what is happening in the world today.

“There is no need for anybody to worry about devaluation because it is a very devastating action to be taken in the country particularly because we are an import-dependent country. Devaluation will hurt the economy. We have an economy that is still very strong with about $39bn in foreign reserve to sustain about nine months of import. For as long as we have crude prices standing at about $100 per barrel, it is a strong economy.

“The policy being adopted now which allows us to hold on to exchange rates and ensure that we do not engage in devaluation should be continued.”

He also described AMCON as a child of circumstance, stressing, “it came about as a result of the financial crisis to clear toxic assets in the books of some banks and to address the plights of those who lost investment in the capital market. “If the agency was not established, some of the banks would have been liquidated today and the customers would have lost their deposits.”

However, Senator Mark warned that “We don’t have to follow the nominees out of the chamber. Please, we should sit where we are (and) if you want to see them later on, we can do so. The way we follow to go and take pictures and all that is not the best for elder statesmen who are our senators. I want to appreciate your cooperation in that aspect”.

Mark at the end of the exercise noted that the number of hours spent on the screening and confirmation of Emefele was clear indication of the importance that the Senate attached to the  offices.

The much awaited screening of Emefiele, considering the impasse between the suspended CBN Governor, Sanusi Lamido Sanusi, over missing oil fund, lasted about two hours as lawmakers posed challenging questions on the governor-designate.