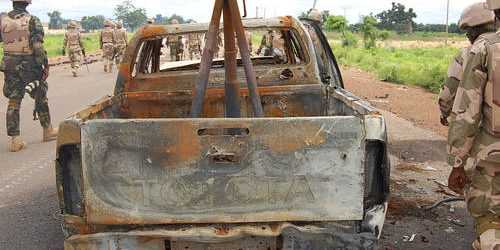 The Islamist terror group, Boko Haram, has routed Nigerian troops from four towns in Borno and Yobe states, both in Nigeria’s violence-plagued northeast that is the epicenter of the group’s activities.

Six days ago, insurgents belonging to Boko Haram took over the town of Gwoza after overwhelming Nigerian troops guarding the town. The Islamist sect’s fighters invaded the town in the middle of last week, massacring more than 100 residents, including a brother of the Emir of Gwoza as well as the chief imam of the town’s major mosque. Security

sources disclosed that the sect also killed or wounded numerous Nigerian soldiers during their initial assault and, days later, in a counter-offensive mounted by the Nigerian Army to try to wrest the town back from the stranglehold of the Islamists.

A top security source disclosed that Boko Haram had successfully beaten back three separate columns of Nigerian troops from Gwoza. “The most recent was a team of soldiers led by Lieutenant Colonel Agwu of the former Special Operations Battalion (SOB) now 234 Battalion,” the source told our correspondent.

SaharaReporters had earlier reported that Colonel Agwu was missing in action after his column made a hasty retreat in the face of an onslaught by a group of heavily armed insurgents. But our military source disclosed that Colonel Agwu was able to escape and to make it back alive to Maimalari Barracks in Maiduguri. “I understand he had to disguise as a woman to escape from the militants,” our security source revealed.

Apart from Gwoza, Boko Haram militants have also seized three towns in Yobe State, according to other security sources. Insurgents belonging to the sect have reportedly taken control of the towns of Buni Yadi, Buni Gari and Goniri, all in Gujba local government area of Yobe State.

Several of the militants have occupied camps abandoned by Nigerian troops as they fled from a series of fierce battles with insurgents, our security sources said.

Members of the sect have bombed Katako Bridge that links Buni Yadi with Damaturu, the Yobe State capital. One source said the Nigerian Army was planning a broad strategy to mount a major military campaign to retake the towns recently seized by Boko Haram. “Our Cameroonian counterparts have been able to take back towns from Boko Haram. We’re planning seriously to do the same thing,” said the army officer. “We have the manpower, training and weapons to defeat Boko Haram,” he added.