The internal war in the Northern Zoological republic of Nigeria 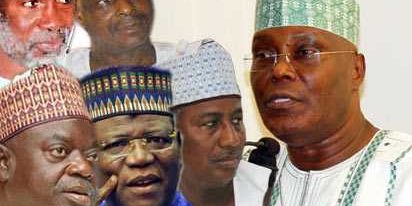 CHIEFTAIN of the Northern Elders Forum, NEF, Professor Ango Abdullahi was trenchant in dubbing President Goodluck Jonathan a good student of former President Olusegun Obasanjo especially on matters concerning agreements in a recent radio interview. Speaking on a Liberty Radio, Kaduna interview, the emerging champion of a northern presidency, however, failed to buttress his argument with the facts of the alleged agreement that has been the subject of much controversy.

“When Obasanjo wanted an extension of tenure for a second term under the zoning arrangement, he had to come to an extended caucus of the PDP. I remember how people opposed the idea. The late Abubakar Rimi was one of them and he was supported by about three others that Obasanjo should not be given an extension and that the Presidency should come to the North for four years before going back to the South,” he said of the PDP caucus where the then president was adopted for a second term in late 2002.

Continuing, Abdullahi said:“Eventually, about 37 people out of the about 41 present voted for the extension for Obasanjo to have a second term. Now coming to why we should not trust people who renege on promises, Obasanjo was the first to deny that there was a zoning that brought him to power. He did that and kept doing it and it is most likely it was from him that they learnt what they are doing because he was instrumental to Jonathan becoming Vice President.

“So, Jonathan must be Obasanjo’s student on matters of zoning because he himself kept saying, when we were arguing that Jonathan rightly became the President of the country when Yar’Adua died, this is what the constitution allows’ and in fact insisted on it and nobody begrudged that.”

Prof. Abdullahi’s assertions nonetheless, a cross section of Northern leaders have come out to differ with him on the eligibility or otherwise of the incumbent president running for another term in 2015. The internal debate within the North has raised speculations of a possible irreversible split in the once formidable political hegemony in the North.

Among those who have differed with Ango Abdulahi on the issue are former Minister of the Federal Capital Territory, Alhaji Mohammed Abba-Gana; former president of the Senate, Senator Ameh Ebute; Dr. Jalili Tafawa Balewa, a son of the country’s first and only prime minister, Alhaji Tafewa Balewa; Senator Emmanuel Bwacha, PDP, Taraba; Gen. Lawrence Onoja among others. The division in the North is reinforced by the support the president is equally having in some sections of the South-his support base in that section of the country.

Asserting that the North as a body is not against the president running for another term of office, Abba-Gana in an interview with newsmen in Lagos said: “It is not true. The North is not against President Jonathan because there are several well respected northern leaders the media may not know who are supporting him.”

Remarkably, the Jonathan 2015 project is also helping to further sharpen the divide in the once united North. While elements from the core North like Prof. Abdullahi have been sharp in demanding the return of the presidency to the North, a sub-set of the North representing mostly the Christian non-Hausa-Fulanis has been largely unmindful in the emerging debate. Indeed, some from that section otherwise dubbed as the northern minority have come forward to plead for a second term for Dr. Jonathan.

Many of the leaders from that section of the country have also affirmed that Prof. Abdullahi does not speak for them. “There is a misconception. The North of the sixties when Sarduana was alive is no longer the same today,” Gen. Onoja, who served as governor of Katsina and Plateau States during the military dictatorships said.

Senator Ebute who is from Benue State and was president of the Senate in 1993 at the time Gen. Sani Abacha usurped the powers of the fledgling Third Republic democratic institutions was even more cutting, saying:

“My advice to them is that they should wait until President Goodluck Jonathan completes his second term since by divine providence; the zoning has automatically fallen on the South-South. God zoned the presidency to the South- South.”

Continuing, he said: “The North whose definition I am not too sure includes the Middle Belt, should wait until the person whom God has given the presidency completes his tenure and as soon as he completes his second term one can now argue that the turn should now come to the North.”

That point was also reiterated by Senator Bwacha thus: “These are individual opinions. But irrespective of whatever anybody is saying, I am a Northerner and I can tell you the preponderance of opinions, that an average Northern minority wants Jonathan to continue in 2015. If those Northerners, who were saying Mr. President cannot continue, like Ango Abdullahi are expressing our opinions, I wouldn’t be saying something different.”

Dr. Abduljhalil Tafawa-Balewa from the core north in Bauchi State asked of his own inclinations towards a second term for Dr. Jonathan said: “You can count on me. I will vote for him. There has never been any Nigerian President since independence until now, that has done so well in appointing women who constitute half of our population to (positions) in ministries and embassies across the world. Terrorism as many people don’t seem to notice often takes a long time before it is calmed down.”

“I don’t know anything that is happening in those organizations but I assure you that apart from the members of the Arewa Consultative Forum and Northern Elder’s Forum there are millions of other Northerners that believe in the administration of Goodluck Jonathan. So when one person representing a few people being funded by the governors and holding press conferences virtually every day is putting up his own ideas, you cannot say that the ideas are the thoughts of everybody within the North.”

“So I don’t know whether Ango Abdullahi is speaking on behalf of the people he has been speaking for. I am not in the position to say that.