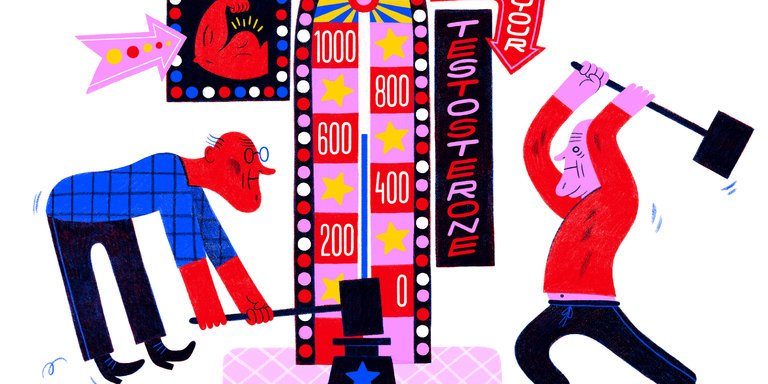 Getting a high testosterone reading offers bragging rights for some men of a certain age — and may explain in part the lure of testosterone supplements. But once you are within a normal range, does your level of testosterone, the male hormone touted to build energy, libido and confidence, really tell you that much?

Normal testosterone levels in men range from about 300 to 1,000 nanograms per deciliter of blood. Going from one number within the normal zone to another one may not pack much of a punch.

“You don’t see the big improvement once men are within the normal range,” said Dr. Shalender Bhasin, an endocrinologist and professor of medicine at Harvard Medical School. The largest differences in terms of energy and sex drive are when men go from below-normal to normal levels.

A 2015 study in JAMA found that sex drive improved among men who went from about 230, considered low, to 500, around the middle of what’s considered normal. There was no difference among men who moved within the normal range from 300 to 500.

Testosterone does influence muscle size. The more testosterone a man takes, the larger the muscle — regardless of starting level, one reason the hormone is popular with young bodybuilders. But testosterone supplements do not seem to help frail older men walk farther or get out of chairs more easily, goals that doctors typically look for in aiding older patients.

Beginning at age 30, testosterone levels drop, on average, about 1 percent a year. About 5 percent of men between the ages of 50 and 59 have low levels of testosterone along with symptoms like loss of libido and sluggishness, according to a few small studies.

The Food and Drug Administration approves testosterone gels and shots only for men with levels under 300, including those who have diseases that cause hormone levels to plummet, such as a pituitary tumor or injury to the testicles. Those men are truly lacking the hormone, so returning the levels to normal can help restore sex drive and energy. Insurance companies typically require two morning testosterone readings of less than 300 nanograms per deciliter plus symptoms of low testosterone before they reimburse for supplements.

In March, The Journal of Clinical Endocrinology and Metabolism published the Endocrine Society’s latest guidelines, which concur with the F.D.A. The group stated that testosterone therapy should only be given for men who have proven low levels of testosterone and avoided in men who have had a stroke or heart attack within the last six months or who are at high risk for prostate cancer.

But testosterone numbers are far from an exact science.

Keith Hall, a 48-year-old petrochemical operator from Baytown, Tex., sought out a men’s health doctor at Baylor College of Medicine because he was tired and lacked libido. His initial testosterone level was below normal, around 202. The urologist he ended up seeing, Dr. Alexander Pastuszak, offered him testosterone shots that raised his levels into the normal range and made him feel better.

Edward Blake, a 53-year-old forklift driver from Houston, sought out the same doctor for the same reasons. His testosterone measured 450, within the normal range. “I was feeling kind of tired and stuff, but after the third shot, I’m lifting things with no problem,” said Mr. Blake. He said in addition to feeling stronger, his sex drive improved.

Dr. Pastuszak said he primarily prescribes testosterone to men in the F.D.A.’s low category but will sometimes let other men with symptoms try it. “If you have these guys in the mid range and you put them on it, the majority will say they want to stay on it,” he said, adding that most men will say it makes them feel better and boosts their sex drive. But is that the power of suggestion or the power of the hormone?

“The reality is we don’t have the answer,” said Dr. Pastuszak, noting that there’s a big gray area. “I have to take their word that they feel better on it, whether that’s real or whether it’s placebo.”

Complicating matters, testosterone levels fluctuate, peaking around 8 a.m. and diminishing throughout the day. Levels tend to be lowest around 8 in the evening, then climb during the night. The peaks and valleys are larger for men 40 and younger compared to men in their 70s. (For a 40-year-old, a morning testosterone reading may be 200 points higher than in the evening, versus a 50-point difference for a 70-year-old.)

And all sorts of things can nudge levels in either direction.

Resistance training increases levels, as does a high-intensity workout. Even watching your favorite sports team win can nudge numbers up, as a 1998 study that measured testosterone among basketball fans before and after a game found. (Testosterone levels declined among those rooting for the losers.) Still, any gains from such activities tend to be fleeting; levels generally return to the individual’s normal within a half-hour or so.

And just as there are things men can do to boost levels, there are activities that lower testosterone scores. Endurance exercises, such as marathon training or cycling long distances, can lower levels, as can stress. Dr. Bhasin said that the kind of training endured by special armed forces — tough exercise, lack of sleep and food — can cause testosterone to drop to the levels of men who have been castrated — lower than 50.

Obesity causes testosterone levels to plummet — while losing 10 percent of body fat can increase levels by 100 points. Even taking care of the kids for several hours can cause levels to drop, a study in the Proceedings of the National Academy of Sciences reported. Flu and other viral illnesses can also cause levels to drop, so you should hold off testing until you’re fully recovered.

As for alcohol, a few beers won’t make a difference in the short term. But the liver damage by chronic alcohol abuse thwarts the production of testosterone.

Further complicating matters, every testosterone-making lab has its own methods of calculating testosterone, so a man may register 300 with one company’s machine but 400 with another. To find a reputable lab, patients can refer to a website from the Centers for Disease Control and Prevention that lists accredited laboratories.

So what about the man who reaches a top reading of 1,000?

Just learning about the score might make him feel so good it boosts his confidence and libido. But that doesn’t mean the effect is a result of changes in his hormone chemistry.

Randi Hutter Epstein is the author of the forthcoming “Aroused: A History of Hormones and How They Control Just About Everything”