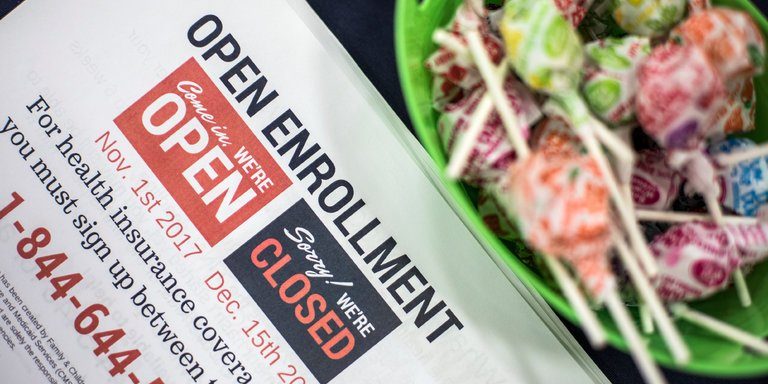 WASHINGTON — The Trump administration said on Tuesday that 11.8 million people had signed up for health insurance through the Affordable Care Act marketplaces for 2018 — roughly 400,000 fewer than last year. The drop was relatively small, given that Mr. Trump had sharply cut federal outreach efforts and the open enrollment period was half as long as in past years.

Virtually the entire decrease came in the 39 states that use the marketplace run by the federal government, HealthCare.gov. In the 11 states that sell coverage for the Affordable Care Act — popularly known as Obamacare — through their own marketplaces, enrollment remained the same as last year. Seema Verma, the administrator of the federal Centers for Medicare and Medicaid Services, congratulated her agency in a Twitter post on “the most cost-effective and successful open enrollment to date!”

Yet Ms. Verma, who frequently echoes Mr. Trump’s attacks on the health law, also said on Twitter that “Americans continue to experience skyrocketing premiums and limited choice” under the law.

According to the agency's final enrollment report, monthly premiums for federal marketplace customers before any subsidy was applied rose by 30 percent this year, to $621 from $476. Subsidies are covering about 86 percent, on average, of the premium cost for those who qualify.

New customers made up about 27 percent of the total enrollment, down from 31 percent last year. The share of customers younger than 35 dropped slightly, while the share of customers older than 55 grew slightly. In all, 83 percent qualified for subsidies that lowered the cost of their premiums, often significantly. Only people with incomes between 100 percent and 400 percent of the poverty level — for an individual, between $12,140 and $48,560 — can get subsidies, with the poorest customers getting the most help.

“The administration should view this report as further evidence for the need for healthy and robust health insurance marketplaces,” said Joshua Peck, who was the chief marketing officer for HealthCare.gov in the Obama administration and now advocates on behalf of the health law.

Mr. Trump’s decision last fall to halt a certain type of payment to insurers was initially expected to hurt enrollment, but it actually ended up helping people who qualify for premium subsidies. Insurers and state regulators worked together to find a way to protect them from cost increases.

Customers who did not qualify for subsidies had no such protection. As a result, Ms. Verma said, they chose plans that were 18 percent less expensive, on average, than those chosen by people with subsidies.

The law’s future remains uncertain despite the failure of Republican efforts to repeal it last year. The tax cut that Congress passed this year repeals the law’s tax penalties for Americans who go without insurance, starting next year, which is likely to lead to further drops in enrollment.

And Ms. Verma’s agency has proposed expanding the availability of short-term insurance, which she said on Tuesday would “provide additional options to Americans who cannot afford to pay the costs of soaring health care premiums.” Such plans are cheaper, but they skirt provisions of the health law and may not cover pre-existing conditions or basic medical needs.

In a poll released on Tuesday by the nonpartisan Kaiser Family Foundation, 53 percent of respondents said they believed that the Affordable Care Act marketplaces were collapsing. But some experts believe that the market has stabilized, with many insurers no longer losing money.