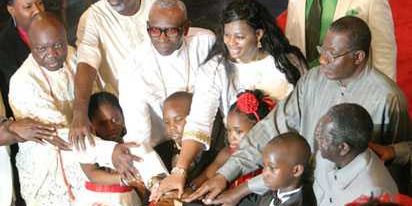 Warri— PRESIDENT Goodluck Jonathan declared yesterday, in Warri, that but for the Church the country would have disintegrated, just as he assured Nigerians that by the end of April next year there would be relative steady power supply.

Speaking at the flag off of this year’s Word of Life Bible Church’s Jubilee Word Festival at the International Gospel Centre, Warri, the President, paid glowing tributes to Pastor Ayo Oritsejafor who marked his birthday yesterday, describing him as a “very very strong president of the Christian Association of Nigeria, CAN.”

President Jonathan was accompanied by the governors of Plateau, Delta and CrossRiver states; Minister of Information

and several PDP leaders, including the newly sworn in senator representing Delta Central District and the executive secretary of Nigerian Christian Pilgrims Welfare Board.

Speaking on The Role of Citizens in Nation Building, the president said nation building is a collective responsibility, and challenged Nigerians to join hands with his administration for the onerous task of building the nation.

He said: “Whenever I have the opportunity to address a religious gathering like this, I always like to repeat myself that but for the Church, this country would probably have gone into oblivion.

“You have been praying persistently day and night and that is why some of our challenges are still at this level. Nigerians are totally committed, not pretenders.”