The BRITISH GOVERNMENT SHOULD APOLOGIZE TO BIAFRA OVER GENOCIDE 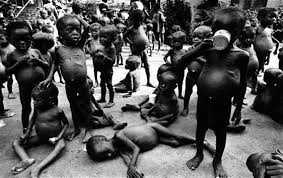 The recurrent killings, bombings and destruction of human lives by the Boko Haram religious sect in the name of Allah and their demands for the Islamization of Nigeria was the greatest justification for the foresyth of the late Odumegwu Ojukwu, President, Commander-in Chief of the armed forces of the Defunct Republic of Biafra.

Odumegwu Ojukwu, a visionary leader, became the Military Administrator of Eastern Region after the military coup of 1966. It was Ojukwu as Battalion Commander in Kano who foiled the northern axis of the Kaduna Nzeogwu coup of 1966 while Ironsi foiled the Lagos end.

The events that occurred later and the one sided success of the coup created the wrong impression that it was an Eastern agenda. This helped to exhume the age old northern resentment of the industriousness of Nigerians of Eastern extraction. This resentment led to the pogrom, a genocide where Easterners were rounded up and brutally murdered in hundreds of thousands all over Northern Nigeria. This pogrom included even the military barracks. Part of the reasons for the pogrom was the view of the northerner that these easterners should be slaughtered until they leave us alone to secede from Nigeria.

The counter-coup of 1966 which led to the death of Aguiyi Ironsi then military Head of State was to give way for northern secession from Nigeria. The inheritor of the situation, Yakubu Gowon was eager for there to be a separation from these troublesome southerners and he was willing to finish what Sir Ahmadu Bello was agitating for before the independence of Nigeria in 1960.

The north due to no fault of theirs has viewed the southerners with suspicion. The feudal north wanted to preserve their monarchial, theocratic and simplistic culture. They detested all dilution associated with western education, western lifestyles and western radicalism. They wanted a controlled cultural, religious and political environment devoid of radicalism and independence mindedness associated with their southern countrymen.

The north was apprehensive of being forced into a marriage with the south of Nigeria. The British colonial government had a sway time convincing the northern oligarchy that being joined to Nigeria was to their best interest. The north was not convinced citing population, commerce, religious and cultural differences as part of their fears.

The British colonialists had to organize to divide Nigeria into three regional blocks, East, West, North knowing that a balkanized south will be easier to manipulate by divide and rule. They then gave the Ahmadu Bello government tips on how to use the balkanized south to their political advantage by fueling divisions and infightings in the south while maintaining cohesion in the north. This advantage brought about the emergence of Tafawa Balewa as the Prime minister. The north, against the dictates of their intuition, decided to follow the advice of the British Colonial masters to go on with one Nigeria.

With the tensions in 1966, Ojukwu and Gowon met in Aburi, Ghana , where the roadmap for the loose confederacy of Nigeria was drawn. The British advisers convinced sGowon that confederation is as good as secession and as such the Aburi accord should be jettisoned. Gowon, based on British advice, reneged on the agreement and plunged the nation into a civil war.

The rejection of the Aburi accord and the subsequent declaration of war on the Biafrans led to the death of three million people on the seceding side. The federal forces wouldn’t have won that war if not for the high level military and diplomatic support from Britain. The British Government was a major supplier of military tactics, arms and support personnel throughout the duration of the war. The then British Labour Foreign Secretary, Michael Stewart, while regretting the actions of British Government against Biafra agonized that “It would have been quite easy for me to say: This is going to be difficult – let’s cut off all connexion with the Nigerian Government,…. “If I’d done that I should have known that I was encouraging in Africa the principle of tribal secession – with all the misery that could bring to Africa in the future” That was one of Britain’s official reason for supporting the genocide.

The fall of Biafra was not a victory by the Federal forces; it was a victory by the British Forces, British Foreign policy and British Government. It is laughable to suggest that the NTC rebels in Libya are responsible for the ouster of Gaddafi. It was foreign powers that aided the NTC rebels to oust Gaddafi. The same foreign powers led by Britain handed victory to the Federal forces.

The curse that came upon Nigeria as a result of the 3 million lives wasted for trying to secede is haunting Nigeria now. Britain would have to grapple with an underdeveloped country whose citizens will be illegally migrating to its shores in search of greener pastures. Britain would have to grapple with the fact that the core north they fought so much to defend will be constantly exporting suicide bombers to British and European territories in the near future. This marriage forced upon Nigeria by the British Government, reinforced during Tafawa Balewa and Yakubu Gowon regimes have created problems of corruption, underdevelopment, murders, diseases, injustice, poverty and the newest addition suicide bombings.

It is gladdening that the British government stood by the Nigerian people during the military dictatorship of Babangida and Abacha. They supported National Democratic Coalition (NADECO) during the dark days of Nigeria. They still support Nigeria in areas of human rights, civil society agitations, capacity building for democracy. The British Government has been cooperating with Nigeria’s Government of Goodluck Jonathan in the fight against terrorism. All these are commendable and appreciable. The worst form of terrorism committed in Nigeria is not Boko Haram whose atrocities is yet to claim up to two thousand lives but the extermination of millions of Biafran lives under the supervision and cooperation of Britain.

The British Government should do their image a lot of good by offering unreserved apology to Biafrans for that foreign policy gaffe and take urgent steps to undo their mistakes. They should champion the cause of allowing every geopolitical zone to develop at their own pace holding on to the values they cherish most and create an exit strategy if the marriage becomes cantankerous.
By Obinna Akukwe