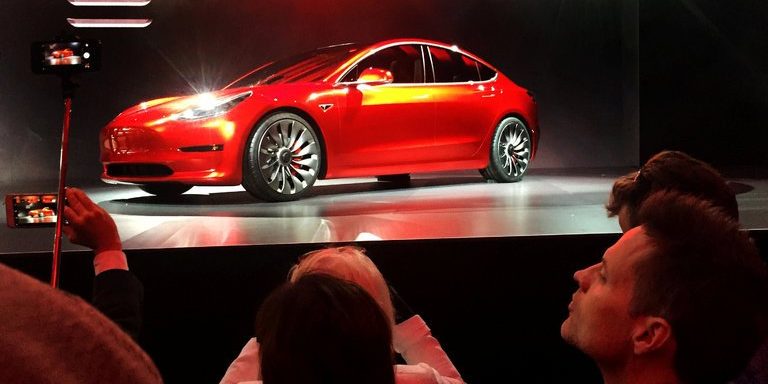 Tesla said on Tuesday that it had produced almost 10,000 Model 3 electric cars in the first three months of 2018, a significant increase from the fourth quarter of last year but still short of the goal that investors hoped the company would reach.

The company said it had expanded output of the Model 3, its first mass-market offering, by “rapidly addressing production and supply chain bottlenecks, including several short factory shutdowns to upgrade equipment.”

The Model 3 is critical to Tesla’s efforts to shore up its finances and generate revenue to repay investors and to develop other vehicles, including an electric truck.

In the past seven days, Tesla said, it produced 2,000 Model 3 vehicles, a rate it expects to sustain in the coming week.

Tesla’s chief executive, Elon Musk, once envisioned producing as many as 500,000 Models 3s this year, but production glitches and other delays have slowed output to a crawl. In the fourth quarter, the company built just 2,425 of the cars.

Its most recent target was to lift production to 2,500 a week.

Including the Model S, a luxury sedan, and the Model X, a sport-utility vehicle, Tesla produced almost 35,000 vehicles in the first quarter, 40 percent more than in the previous quarter. In a filing with the Securities and Exchange Commission, the company called it “the most productive quarter in Tesla history.”

Tesla has been slammed in recent weeks by a barrage of negative news. Concern has grown over the safety of its Autopilot driver-assistance system after a fatal crash in California on March 23 that the company said occurred while Autopilot was engaged. It was at least the third fatal crash that has taken place while a driver was using Autopilot.

Tesla’s stock and bond prices have plunged amid concerns about how much cash the company is using as it struggles to speed up assembly and sales of the Model 3. With a starting price of $35,000, the car is supposed to be more affordable than Tesla’s other cars. The company has been counting on a quick expansion of its Model 3 business to increase revenue.