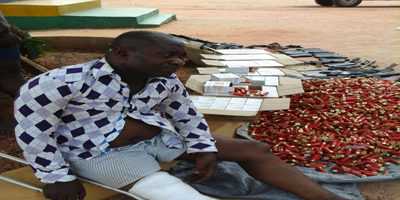 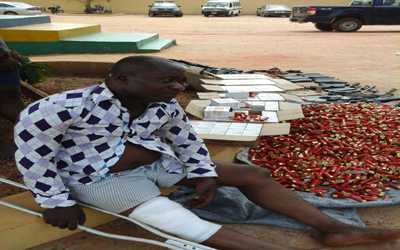 There was tension at the Onitsha Main Market yesterday when the Anti-Robbery Squad (SARS) invaded the market to arrest a notorious arms dealer, Alphonsus Ngwu. Ngwu’s men tried to prevent his arrest. But he was shot while trying to escape during a commotion. The shots created tension, as traders scampered for safety. The SARS team recovered over 8,000 rounds of live ammunition from his shop. Others are: six pump action, one revolver, 6,390 live cartridges, 62 rounds of 5.65mm live ammunition, 74 rounds of 9mm live ammunition, 100 rounds of air rifle ammunition, 12 magazines for AK 47, 2 magazines for k-2 rifle, dismantled parts of AK-47, GPMG ammunition and one smoke cartridge. Commissioner of Police Gwary Usman described Ngwu as special arms dealer and smuggler. He hailed the SARS team, led by James Nwafor. Ngwu, from Ugwuoba in Oji River Local Government Area of Enugu State, told the reporters the items were recovered from his shop and promised to lead Nwafor to his warehouse. But he said he was not involved in robbery or kidnapping. He said he had been in the business for 15 years, adding that he gets his arms from abroad. The suspect alleged that a man from the North was his contact man. The police alleged that he was behind communal clashes in the country, as he supplies arms to warring communities and dealers, who sell to robbers. From a record of his sales, it was learnt that he sells two pieces of AK 47 for N620,000. From the addresses in the log book, the police alleged that he sponsored the Ezza/Ezilo war, among others.