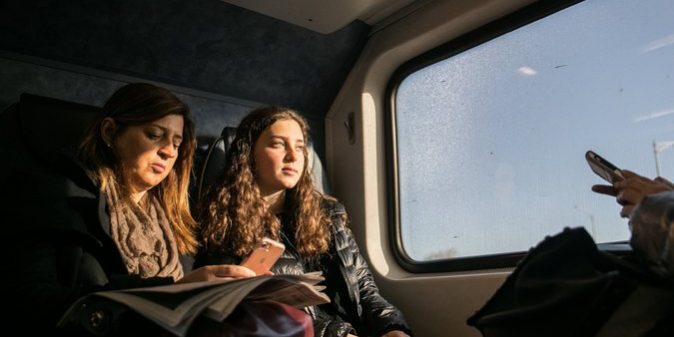 How a News Junkie Stays Plugged In: Newsletters and Her Kids

How do New York Times journalists use technology in their jobs and in their personal lives? Rebecca Blumenstein, a deputy managing editor for The Times, discussed the tech she’s using.

What are your favorite tech tools for spotting breaking news and trend stories?

I’ve always been a news junkie, and technology makes that much easier. I reach for my phone the moment I get up and scroll through the headlines of the major sites.

I’m a big fan of email newsletters, and they’re often the first thing I dive into every day. Politico’s Morning Media, The Times’s DealBook and morning news briefings, The Wall Street Journal’s morning email, and Ben Thompson’s Stratechery Daily Update are among my regular reads.

I also check Facebook and Twitter throughout the day. Facebook keeps me connected with a range of people, from my high school friends in Michigan to an extended community of people I know from working in Beijing. I find much more diverse postings there than many seem to acknowledge. While I find Twitter vital, especially for breaking stories, I think it can be too easy to get stuck in a largely circular conversation among journalists.

I grab parts of the print paper to read on the train, but I usually end up doing most of my reading on my phone. I’m increasingly keeping an eye on the various attempts by tech companies to personalize the news. I like Flipboard and Nuzzel, in particular.

While my job requires me to follow the news constantly, I strive to avoid being sucked into merely reacting to someone else’s headlines. The Times aims to break news and do the kind of journalism that sets the agenda other outlets must follow.

What are some of your favorite tech tools in general?

One is the Apple Watch. While I was initially skeptical, I really like how it allows me to be more present in conversations and look at my phone less during the day. It will alert me when I have a meeting coming up. Texts come right to me, which lessens the odds of missing important messages. I also like how it logs the distance of my runs. It would be great to have it be more independent of the phone, though. I haven’t upgraded to the new one, but I may have to.

Battery life is a constant challenge for me, and I know that the new iPhone would help, but I’ve only had mine for a year and it would feel a bit wasteful ditching it. I’ve also been trying out the Huawei Mate 10 Pro phone, which has a significantly longer battery life with two cameras and a processor that uses artificial intelligence to improve the user experience.

I’ve been trying to talk my husband and kids into getting a digital assistant like Alexa. But they are concerned about privacy, and I don’t want to be in the position of imposing more tech on my kids! I think that people will need more guarantees about privacy before they fully embrace digital assistants.

What are the most important tech trends to follow in the coming years?

I think that artificial intelligence is going to fundamentally change the way we work and live. It won’t replace humans, but it will change the majority of their jobs by eliminating rote parts of work. How exactly this plays out will have tremendous implications for society.

The battle between Detroit and Silicon Valley over the future of cars is epic. Billions of dollars will be won or lost, and the outcome will have big implications for work, especially in the Midwestern states where the traditional automakers still have most of their operations. Cars have already essentially become computers on wheels, and that will only continue as more autonomous features are added.

But I believe that electric cars will become far more widespread before fully autonomous driving. We recently bought a Chevy Volt and have been very impressed with the torque of the electric motor and the battery’s 45-mile range before the gas engine takes over. I used to cover the auto industry in Detroit, and I think it’s important to try out new things.

I’m also a firm believer that the spread of technology — what some call the fourth industrial revolution — will give opportunities to millions of people around the globe. We need to stop thinking of Silicon Valley and New York as the centers of the world; there are now many others. China, in particular, has emerged as a hotbed of tech innovation. It has 700 million internet users and 50 times the number of people using mobile payments as the United States.

You’ve been building up The Times’s conferences and live events. How important is tech to the success of these events?

The heart of a successful event is the quality of the interviews and the conversation. Live events are a way to bring journalism to life — I call it live journalism. While many people want to dive into a 4,000-word investigative story, even more could learn about the findings through a video of an interview with the reporter.

We increasingly tap Facebook Live and other social media to make our events more interactive and to include those not fortunate enough to be in the room.

I’m also struck by how important live events are. We have more information at our fingertips than ever before. Yet more than ever we also need events that help us meet that person we otherwise wouldn’t have. This is a phenomena that has been well explained by my friend Priya Parker in her coming book, “The Art of Gathering.”

What tech products are your children currently obsessed with?

I have three kids, and they teach me an enormous amount about the future of technology.

The two youngest, ages 14 and 17, are very into Snapchat. I delayed getting my daughter an iPhone for years, but gave in when she turned 13. She and her friends don’t talk on the phone. They Snap.

But my daughter knows what’s going on in the world. The other morning, she was walking around the house listening to videos from NBC’s “Stay Tuned” show. The short segments have gained millions of unique users every month.

My 17-year-old son is also a big Snapchat fan and loved the feature that took users to a different city and country every week. He is also among the millions very into the video game Fortnite. It’s a survival game that he plays with friends who form teams. He hadn’t been a gamer until now, and it’s driving me a bit crazy, to be honest.

My older son, 20, is a sophomore at design school and is very into Instagram. He captures his worldview through his photos and designs, and has developed quite a following. He sees himself as a different generation from his younger siblings. He has also been getting a lot more into news lately, mostly through the Times iPhone app, which makes me happy.

What is your favorite low-tech thing that you will never give up?

My most retro habit is probably shopping — in person. I’m a big fan of grocery stores and actually like going to the store. I like interacting with people and laying my hands on my fruit before I buy it. I also found it one of the best places to take my kids when they were young — they were interested in everything (even though there were rough moments, of course). It kind of depresses me that people think they need to order everything online now.

I’m also a big fan of going to the store to try on shoes or clothes. I just hate having to return things, even when the retailers enclose shipping labels. I think that retailers can succeed if they give a personal touch.