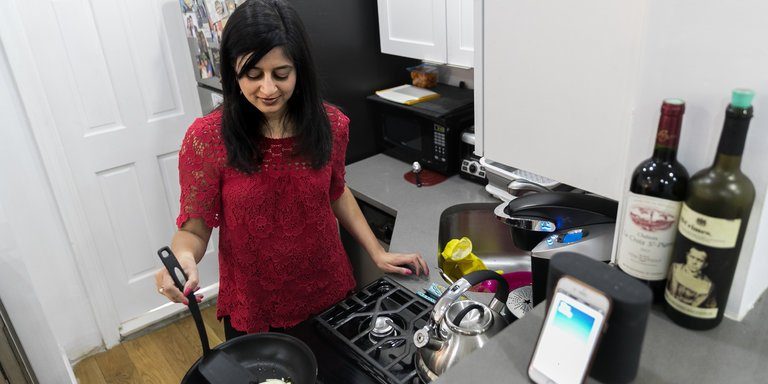 Following the Trail of Online Ads, Wherever It Leads

How do New York Times journalists use technology in their jobs and in their personal lives? Sapna Maheshwari, a reporter who covers advertising for The Times, discussed the tech she’s using.

What tech tools do you use to monitor what advertisers are doing with our data on websites, apps and gadgets?

Digital advertising can be tough to track because so much of it is automated and personalized. But I use Ghostery, a browser extension that shows you the data collection tools that companies are using to track your activity on any given site, along with the option to block them. Often, these companies are building robust pictures of your habits, sometimes across devices, which can ultimately be used to sell ads.

I’ve also used services like Moat Pro and Pathmatics, which monitor online ads and can give you some insight into what pitches brands are running and where. (That was particularly helpful with some of the advertiser boycotts we saw last year on sites like Breitbart.) I also keep tabs on some Facebook and Reddit groups that talk about marketing and scams.

More than anything, though, I do lots of phone interviews — despite what they say about millennials and phones — and meet with brand marketers and people at ad agencies and ad technology companies to hear what they’re thinking about and working on.

What do you like about these tools, and what could be better?

The online ad tracking services are helpful for the desktop and mobile web, but I haven’t yet found an effective way to sort through the many, many ads that flow through Facebook and Instagram or across various mobile apps.

In the wake of the Facebook-Cambridge Analytica controversy, many privacy experts are pointing out that if something is free, you are the product. Do you agree with that?

This question makes me think of a headline from The Onion, “Exciting New App Allows Users to Be Pawns in 26-Year-Old C.E.O.’s Little Game.” I generally agree with the privacy experts, but don’t know if there are good ad-free alternatives for a lot of services that people can pay for. Maybe in the future?

How has tech changed advertising, and how much is the advertising industry looking to tech these days?

Tech has transformed advertising — there are so many more ways to target and reach people now than when the industry was dominated by TV, print, radio and event sponsorships.

There’s also so much more data being collected about our habits by an array of companies, from big tech platforms to agencies to the advertisers themselves. Huge portions of advertising dollars in the past few years have gone to the big tech giants that we read about all the time — specifically Google and Facebook and, to a lesser extent, companies like Snap. Lately, advertisers have said they’re spending more money on Amazon. So there are still more major changes afoot.

As for how advertisers are looking at tech — it can be a double-edged sword. The ability to follow consumers wherever they go online comes with the risk that brands could end up with their ads appearing on conspiracy and extremist sites or offensive YouTube videos. Platforms like Twitter have made it easy for brands to talk to consumers, but it’s also opened them up to new criticism, demands and potential boycotts.

Advertisers are also grappling with how to measure their ads in this new world. That’s a challenge throughout the industry. Think of all the ways that people watch TV shows now. I recently watched — or, more accurately, binged — NBC’s “The Good Place.” I watched the first season on Netflix, where there were no ads, then saw the first eight episodes of the second season through NBC’s Apple TV app, where there were lots of commercials. I watched the final few on Hulu, which might have had different ads. That type of behavior — especially since I was using my parents’ cable login for the NBC app — is a new kind of challenge for the people buying, selling and measuring ads.

What do you think of Google’s and Facebook’s power in the online ad industry?

It’s an enormous topic within the advertising industry, which generally refers to Google and Facebook as the “duopoly.” It’s pretty remarkable that two of the world’s most valuable companies make virtually all of their money from selling online ads and dominate more than half of the American digital ad market.

Their size and influence make it essential for people to really understand how the companies’ business models work and the types of information they’re sharing with them every day — and what makes them such powerful advertising machines.

Obviously, advertisers are drawn to Facebook and Google properties because people are spending lots of time there. But they’re also fast and easy to use and rely heavily on automation. Lately, we seem to be getting a crash course in how the tools that advertisers love can be misused, whether it’s in the political realm or through fraudulent or discriminatory ads. I’m interested to see how humans factor into solving some of these issues — for example, YouTube is implementing more human screening of videos to assuage advertisers’ fears about appearing on inappropriate content.

Outside work, what tech product do you love using?

It’s a tie between two. I recently installed a Chrome extension called HabitLab to help keep me from wasting time when I’m online.

And I love the Bose wireless speaker that my boyfriend gave me for Diwali. I use it to listen to podcasts and talk on the phone while cooking or cleaning. I love that the speaker gets me away from my phone, which can charge in the meantime, and that I can use it throughout my apartment. It would be nice if it just did the cooking for me, though.

What’s your advice for those who want to prevent their data from being tracked by advertisers?

It’s hard to prevent, but you can take some steps to limit it. Explore the privacy settings on your smartphone, including which apps have access to your location and microphone and whether you allow ad tracking. Delete apps that you don’t use anymore.

Some people like ad blockers, but they can be operating their own businesses that allow ads through from advertisers that pay them. You could also check the settings for internet-connected devices like your television, and turn off certain “smart” features that could be sharing your viewing habits with third parties. When you check out at a store, you can avoid giving your phone number, email address or ZIP code. Finally, you can see and delete your ad preferences on Facebook and those for Google, too.