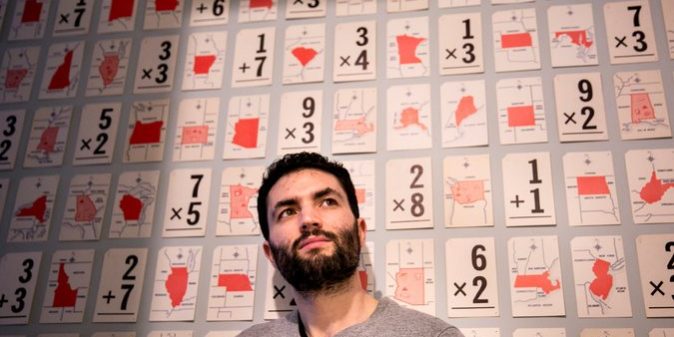 SAN FRANCISCO — Worried about someone hacking the next election? Bothered by the way Facebook and Equifax coughed up your personal information?

The technology industry has an answer called the blockchain — even for the problems the industry helped to create.

The first blockchain was created in 2009 as a new kind of database for the virtual currency Bitcoin, where all transactions could be stored without any banks or governments involved.

Now, countless entrepreneurs, companies and governments are looking to use similar databases — often independent of Bitcoin — to solve some of the most intractable issues facing society.

“People feel the need to move away from something like Facebook and toward something that allows them to have ownership of their own data,” said Ryan Shea, a co-founder of Blockstack, a New York company working with blockchain technology.

The man who created the World Wide Web, Tim Berners-Lee, has said the blockchain could help reduce the influence of the big internet companies and return the web to his original vision. But he has also warned that it could come with some of the same problems as the web.

Blockchain allows information to be stored and exchanged by a network of computers without any central authority. In theory, this egalitarian arrangement also makes it harder for data to be altered or hacked.

Investors, for one, see potential. While the price of Bitcoin and other virtual currencies have plummeted this year, investment in other blockchain projects has remained strong. In the first three months of 2018, venture capitalists put half a billion dollars into 75 blockchain projects, more than double what they raised in the last quarter of 2017, according to data from Pitchbook.

Most of the projects have not gotten beyond pilot testing, and many are aimed at transforming mundane corporate tasks like financial trading and accounting. But some experiments promise to transform fundamental things, like the way we vote and the way we interact online.

“There is just so much it can do,” said Bradley Tusk, a former campaign manager for Michael R. Bloomberg, the former mayor of New York, who has recently thrown his weight behind several blockchain projects. “I love the fact that you can transmit data, information and choices in a way that is really hard to hack — really hard to disrupt and that can be really efficient.”

Mr. Tusk, the founder of Tusk Strategies, is an investor in a number of large virtual currency companies. He has also supported efforts aimed at getting governments to move voting online to blockchain-based systems. Mr. Tusk believes that blockchains could make reliable online voting possible because the votes could be recorded in a tamper-proof way.

“Everything is moving toward people saying, ‘I want all the benefits of the internet, but I want to protect my privacy and my security,’” he said. “The only thing I know that can reconcile those things is the blockchain.”

Blockchains assemble data into so-called blocks that are chained together using complicated math. Since each block is built off the last one and includes information like time stamps, any attempt to go back and alter existing data would be highly complicated. In the original Bitcoin blockchain, the data in the blocks is information about Bitcoin wallets and transactions. The blocks of data in the Bitcoin blockchain — and most of its imitators — are kept by a peer-to-peer computer network.

The novel structure allows people to set up online accounts that can securely hold valuable personal information without having to trust a single entity that can hoard, abuse or lose control of the data, as happened with Facebook and the consumer credit reporting agency Equifax.

A range of corporations and governments are trying to apply the blockchain model — for projects from the prosaic to the radical.

Various departments of the United Nations now have blockchain experiments looking to tackle climate change, the delivery of humanitarian aid and the identity challenges faced by stateless people.

Coca-Cola and the State Department recently announced a project to register foreign employees on a blockchain in an attempt to eliminate forced labor.

These experiments have drawn skepticism from Bitcoin aficionados, who say blockchains are being applied to problems that could be more easily solved with old-fashioned databases.

Other critics say the rapid pace of blockchain development could lead to the same problem facing the broader tech industry: a willingness to disrupt and overthrow old systems before the replacement has been thoroughly tested.

“The blockchain industry is ready and waiting to say, ‘Yes, we are the solution,’ and they have every incentive to do so,” said Angela Walch, a research fellow at the Center for Blockchain Technologies at University College London. “But somebody needs to ask the question: ‘Is it actually better? Is it measurably better?’”

Many blockchain projects opened themselves to criticism and regulatory scrutiny by raising money through so-called initial coin offerings last year. These fund-raising campaigns often brought in tens of millions of dollars in minutes with little regulatory oversight.

Most of the biggest internet companies make their money from collecting personal information and using it to sell targeted advertisements. This kind of massive data collection makes them vulnerable to hackers and outsiders who want to leverage the data — as was evident when Cambridge Analytica improperly gained access to 50 million Facebook profiles. And start-ups are using the blockchain in an attempt to pry control of all that data out of their hands.

Blockstack has built a way to record the basic details about your identity on a blockchain database and then use that identity to set up accounts with other online projects that are built on top of it.

The animating force behind the project is that users — rather than Blockstack or any other company — would end up in control of all the data they generate with any online service.

Blockstack is one of several blockchain-based projects hoping to create a new generation of online services that don’t rely on having unfettered access to our personal information.

The idea has gained enough steam that in the days after news of Facebook’s relationship with Cambridge Analytica broke, Twitter was filled with people calling for blockchain-based alternatives.

“As Facebook is collapsing we need to replace it with a blockchain based, decentralized platform!” one user, @GerdMoeBehrens, wrote.

“#blockchain WE NEED U NOW!!!” wrote another, @andymartin46.

But Mr. Berners-Lee has warned that the development of the blockchain could come with unintended consequences, like more activity from criminals operating outside the oversight of governments.

Even blockchain advocates say the hype has conditioned people to think that good answers are close at hand, when it could take five or 10 years for the technology to properly develop.

In fact, most blockchain projects are still plagued by concerns about privacy. For example, the widely used Bitcoin blockchain allows certain data — details of the transactions between users — to be seen by anyone, even if other data — the users’ identities — remains obscured. Voting start-ups have solved this by encrypting the data before putting it on a blockchain, but there are questions about whether this will solve other privacy concerns.

“We’re not saying that tomorrow you can switch the flip and a blockchain is going to solve these problems,” said Michael Casey, a co-author of “The Truth Machine,” a new book on the blockchain. “What’s important is how it opens the door to a new way of thinking about the problems we face.”