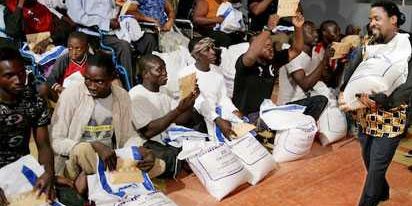 Three weeks after 116 people, of whom 84 South Africans lost their lives when a six-storey guest house attached to the Synagogue Church of All Nations, SCOAN, Ikotun-Egbe, Lagos, collapsed, fresh indications have emerged that the South-African government and the Nigerian authorities in Lagos are bickering over alleged inadequate mortuary and facilities which may have led to the decomposition of the victims corpses beyond recognition.

South Africa Broadcasting Corporation, SABC, quoting the South African government last weekend, said that families of deceased who died in the building collapse have had an endless wait for the return of the bodies, which continue to decompose, stating that in some mortuaries, bodies were being kept cool with fans and no refrigeration.
Lagos debunks claims
Debunking this claim, spokesperson to Governor Babatunde Fashola of Lagos State, Hakeem Bello, said the state felt insulted by the criticism that there were inadequate mortuaries and facilities to take care of the corpses of the South Africans.
Bello said: “We recorded a more complex disaster during the Dana air crash in Lagos in 2012 in which 153 persons were burnt beyond recognition. Did we not identify the bodies of the victims?
“In the case of the Synagogue building collapse, the State Health Commissioner even called on relations of victims to come forward and provide tissues and sample evidence for DNA tests. Does that not suggest a more sophisticated environment?”
We have enough mortuary space—Lagos Govt
A source at the Lagos State Ministry of Health also insisted the state had enough mortuary space.
“We have 24 general hospitals. The mortuary in (the Lagos State University Teaching Hospital) is of world-standard.
“We have mortuaries in Gbagada General Hospital, Lagos Island, Lagos Mainland General Hospitals and, in fact, in all the 25 hospitals in the state, and there are also private mortuaries which are all of world-standard.”
He added that whoever had said Lagos did not have enough mortuaries to take care of bodies of the South Africans must be saying this so that the South African government would hasten the evacuation of the bodies.
Willaim speaks
However, spokesperson of the inter-ministerial task team on the Nigerian tragedy, Phumla Williams said in a statement that the government was already finalising the process of bringing the remains of the 84 South Africans home, but expressed doubt on the timeline.
“We wish we had a timeline. We are entirely at the mercy of the Nigerians.”
She said the South African government had decided to have a frank discussion with the families about the state the bodies would be in when they were returned, saying, “We are appealing to you that you expect the worst. I don’t think you want to see your relative in the state that they are in. The majority of them, I don’t think, are looking good.”
Williams said that they believed three or four of the bodies from South Africans killed were in a better state because they were embalmed quickly.
The South African government had hoped that the process of repatriation would move quickly after the post-mortems.
However, this process had been frustrated by the fact that Nigerian officials had insisted on doing DNA testing themselves, even though the technology is unavailable.
Assistance
Williams who claimed that South Africans had hoped to at least assist in the process, said: “Nevertheless, the government was still waiting to hear if the bodies had been transported to a service provider for the testing.  We don’t know when they are going to finish. We also learned that because of the state in which the bodies are in, the DNA testing is not going to be a quick process. So, this left the government reluctant to estimate a date for the return of the bodies as it did not want to create unnecessary expectations. However, at any stage; we the South African government are ready to go and fetch the bodies,” she said.