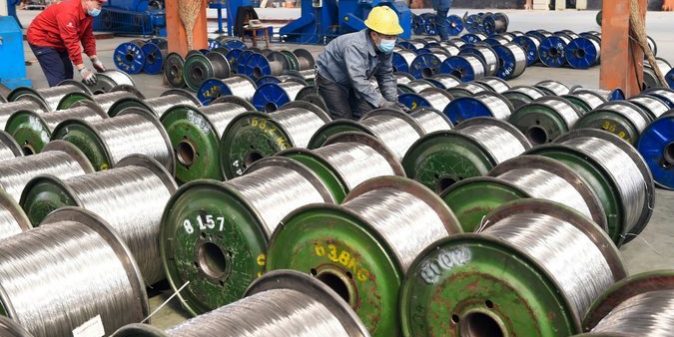 Specifically, that way goes through Malaysia — a 4,600-mile diversion compared with sending a shipping container from China straight across the Pacific to the United States. But when those Chinese products arrive at an American port, they will look as if they had come from Malaysia, according to the company, and will be spared tariffs aimed at Chinese goods.

“For those unfair trade barriers targeting our industries from certain countries,” Settle Logistics says on its website, “we can adopt other approaches to bypass those trade tariffs in order to expand markets.”

Such zigzagging routes are called transshipments, and President Trump has used them to justify the trade fight he has picked with a number of countries. They could also take on new relevance should the United States and China carry out their threats to levy a total of more than $200 billion in tariffs against each other.

Mr. Trump imposed tariffs last month on steel and aluminum imports almost no matter where they come from, citing transshipments, though he later carved out temporary exemptions for some countries. He argues that China uses transshipments to send much more steel to the United States than trade data suggests and that broad tariffs are needed to stop it.

“If you talk China, I’ve watched where the reporters have been writing 2 percent of our steel comes from China. Well, that’s not right,” Mr. Trump said last month. “They transship all through other countries.”

The scale of such tariff-dodging isn’t clear. Based on available data, many economists don’t believe that it plays a major role in American trade. For example, the United States imports only modest amounts of steel from Malaysia, Vietnam, Indonesia or other Southeast Asian countries that are popular stops for freight forwarders like Settle Logistics.

Still, the shadowy world of transshipments and other trade trickery is set to get a much closer look. Transshipments are likely to be a major part of any negotiations between China and the United States aimed at settling their trade dispute. They could also figure into conversations with Europe, South Korea, Canada and other major partners looking to extend their exemptions from Mr. Trump’s steel tariffs. The governments may need to be on alert to make sure they do not become way stations and anger Washington.

Prime Minister Justin Trudeau of Canada announced on March 27 that his country would enact a series of regulatory measures to block transshipments. By contrast, South Korea has insisted that it makes sure the true origins of cargo are accurately identified and that tariffs are paid.

Transshipments are perfectly legal in most cases. The problems occur when somebody disguises the country of origin.

“Products requirement: Do not have a ‘Made in China’ logo,” says the website of one Chinese freight forwarding company, CT-Chan, that promises it can help manufacturers avoid American tariffs.

Transshipments and relabeling aren’t the only trade dodge out there, and China by no means has a monopoly on them. American steel and aluminum companies complain that some basic metal is sent to other countries for minimal processing before it is shipped to the United States. Critics say big multinational companies use an accounting trick called transfer pricing — a common way to dodge taxes — to avoid paying higher tariffs when shipping goods between their international subsidiaries.

The network of Chinese brokers that bypass tariffs in the West by shipping goods through other countries is extensive and highly developed. The company websites boast of sending steel, aluminum foil, clothing, solar panels and even stainless steel sinks to the United States and Europe while evading tariffs.

Many of the brokers try to shield themselves from any criticism in China by wrapping themselves in nationalism. Top & Profit International Forwarding in Shenzhen says on its website that it is “breaking the barriers of international trade and anti-dumping to let Chinese products enter international markets successfully.”

CT-Chan, based in Guangzhou, advertises that “transshipment is the only way to avoid high tariffs and import limits.”

The freight companies say they use a variety of techniques. Settle Logistics, in Hangzhou, says on its website that its works with a factory in Malaysia and can obtain Malaysian certificates of origin for goods made in China.

Brokers also describe breaking up larger orders into a series of shipments from ports scattered around China. The goal is to reduce the odds that American trade associations would detect big shipments and report them.

On its website, Settle Logistics says it encourages companies to comply with trade regulations. John Zhao, one of the owners of Settle Logistics, said he was providing a needed service by creating alternative routes to the American market.

“If Chinese enterprises cannot export their products to the U.S. and they are not qualified to build factories overseas, we can offer help to them,” he said.

The shipments meet Chinese export regulations when they go to places like Malaysia, Mr. Zhao said. After that, he said, “it is the U.S. government’s role to judge which country the products are originally from, and whether this business is legal or not.”

American customs officials said in a written reply to questions that the United States had “a sophisticated targeting process to identify countries, manufacturers, importers and shipments that are at high risk.”

The services aren’t cheap, but high tariffs can make them appealing. Shipping goods from China to the United States by way of Malaysia costs $3,000 to $4,000 per 40-foot shipping container, at least $2,000 more than shipping directly to the United States, brokers said. The extra costs include $500 for a Malaysian certificate of origin, at least $950 for unpacking goods in Malaysia and repacking them in a different container and $600 or more for the additional sea freight.

Malaysian trade officials said the country did not have a specific law against tariff circumvention. Still, it has laws against the falsification of documents and requires companies to manufacture products there in order to obtain local certificates of origin.

A new era of tariffs could make transshipments even more appealing. Brokers described receiving up to 10 times as many phone calls for price quotes as usual in the past several weeks as trade tensions between Washington and Beijing heated up.

Stamping out such transshipments could prove difficult. The United States made a big effort in the late 1990s to address the relabeling in Hong Kong of garments that had been made in mainland China, said Patrick Conway, a textiles trade specialist.

But after American officials gathered enough evidence to put companies on a watch list, the companies quickly disappeared, said Mr. Conway, who is the chairman of the economics department at the University of North Carolina at Chapel Hill. Some of the same people involved emerged later, but at other companies.

“We can anticipate a game of Whac-a-Mole,” Mr. Conway said.