Taboo Italian Thinker Is Enigma to Many, but Not to Bannon 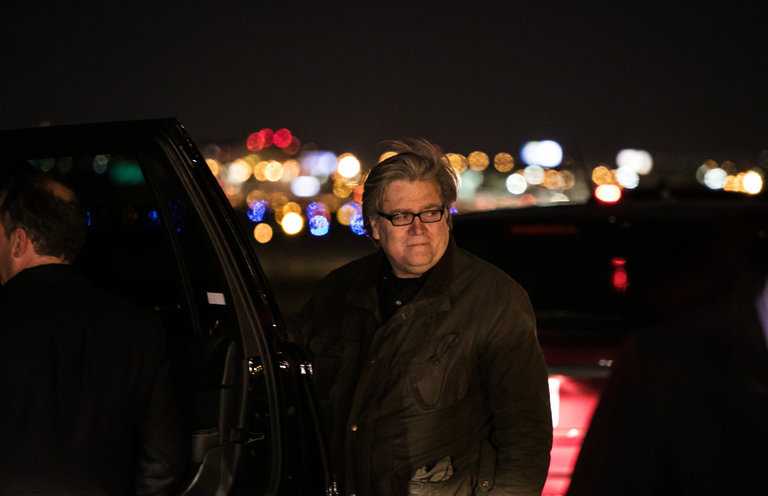 ROME — Those trying to divine the roots of Stephen K. Bannon’s dark and at times apocalyptic worldview have repeatedly combed over a speech that Mr. Bannon, President Trump’s ideological guru, made in 2014 to a Vatican conference, where he expounded on Islam, populism and capitalism.

But for all the examination of those remarks, a passing reference by Mr. Bannon to an esoteric Italian philosopher has gone little noticed, except perhaps by scholars and followers of the deeply taboo, Nazi-affiliated thinker, Julius Evola.

“The fact that Bannon even knows Evola is significant,” said Mark Sedgwick, a leading scholar of Traditionalists at Aarhus University in Denmark.

Evola, who died in 1974, wrote on everything from Eastern religions to the metaphysics of sex to alchemy. But he is best known as a leading proponent of Traditionalism, a worldview popular in far-right and alternative religious circles that believes progress and equality are poisonous illusions.

ROME — Those trying to divine the roots of Stephen K. Bannon’s dark and at times apocalyptic worldview have repeatedly combed over a speech that Mr. Bannon, President Trump’s ideological guru, made in 2014 to a Vatican conference, where he expounded on Islam, populism and capitalism.

But for all the examination of those remarks, a passing reference by Mr. Bannon to an esoteric Italian philosopher has gone little noticed, except perhaps by scholars and followers of the deeply taboo, Nazi-affiliated thinker, Julius Evola.

“The fact that Bannon even knows Evola is significant,” said Mark Sedgwick, a leading scholar of Traditionalists at Aarhus University in Denmark.

Evola, who died in 1974, wrote on everything from Eastern religions to the metaphysics of sex to alchemy. But he is best known as a leading proponent of Traditionalism, a worldview popular in far-right and alternative religious circles that believes progress and equality are poisonous illusions.

Evola became a darling of Italian Fascists, and Italy’s post-Fascist terrorists of the 1960s and 1970s looked to him as a spiritual and intellectual godfather.

They called themselves Children of the Sun after Evola’s vision of a bourgeoisie-smashing new order that he called the Solar Civilization. Today, the Greek neo-Nazi party Golden Dawn includes his works on its suggested reading list, and the leader of Jobbik, the Hungarian nationalist party, admires Evola and wrote an introduction to his works.

More important for the current American administration, Evola also caught on in the United States with leaders of the alt-right movement, which Mr. Bannon nurtured as the head of Breitbart News and then helped harness for Mr. Trump.

“Julius Evola is one of the most fascinating men of the 20th century,” said Richard Spencer, the white nationalist leader who is a top figure in the alt-right movement, which has attracted white supremacists, racists and anti-immigrant elements.

In the days after the election, Mr. Spencer led a Washington alt-right conference in chants of “Hail Trump!” But he also invoked Evola’s idea of a prehistoric and pre-Christian spirituality — referring to the awakening of whites, whom he called the Children of the Sun.

Mr. Spencer said “it means a tremendous amount” that Mr. Bannon was aware of Evola and other Traditionalist thinkers.

“Even if he hasn’t fully imbibed them and been changed by them, he is at least open to them,” he said. “He at least recognizes that they are there. That is a stark difference to the American conservative movement that either was ignorant of them or attempted to suppress them.”

Mr. Bannon, who did not return a request for comment for this article, is an avid and wide-ranging reader. He has spoken enthusiastically about everything from Sun Tzu’s “The Art of War” to “The Fourth Turning” by William Strauss and Neil Howe, which sees history in cycles of cataclysmic and order-obliterating change. His awareness of and reference to Evola in itself only reflects that reading. But some on the alt-right consider Mr. Bannon a door through which Evola’s ideas of a hierarchical society run by a spiritually superior caste can enter in a period of crisis.

“Evolists view his ship as coming in,” said Prof. Richard Drake at the University of Montana, who wrote about Evola in his book “The Revolutionary Mystique and Terrorism in Contemporary Italy.”

For some of them, it has been a long time coming.

“It’s the first time that an adviser to the American president knows Evola, or maybe has a Traditionalist formation,” said Gianfranco De Turris, an Evola biographer and apologist based in Rome who runs the Evola Foundation out of his apartment.

“If Bannon has these ideas, we have to see how he influences the politics of Trump,” he said.

A March article titled “An Establishment Conservative’s Guide to the Alt-Right” in Breitbart, the website then run by Mr. Bannon, included Evola as one of the thinkers in whose writings the “origins of the alternative right” could be found.

The article was co-written by Milo Yiannopoulos, the right-wing provocateur who is wildly popular with conservatives on college campuses. Mr. Trump recently defended Mr. Yiannopoulos as a symbol of free speech after demonstrators violently protested his planned speech at the University of California, Berkeley.

The article celebrated the youthful internet trolls who give the alt-right movement its energy and who, motivated by a common and questionable sense of humor, use anti-Semitic and racially charged memes “in typically juvenile but undeniably hysterical fashion.”

“It’s hard to imagine them reading Evola,” the article continued. “They may be inclined to sympathize to those causes, but mainly because it annoys the right people.”

Evola, who has more than annoyed people for nearly a century, seems to be having a moment.

“When I started working on Evola, you had to plow through Italian,” said Mr. Sedgwick, who keeps track of Traditionalist movements and thought on his blog, Traditionalists. “Now he’s available in English, German, Russian, Serbian, Greek, Hungarian. First I saw Evola boom, and then I realized the number of people interested in that sort of idea was booming.”

Born in 1898, Evola liked to call himself a baron and in later life sported a monocle in his left eye.

A brilliant student and talented artist, he came home after fighting in World War I and became a leading exponent in Italy of the Dada movement, which, like Evola, rejected the church and bourgeois institutions.

Evola’s early artistic endeavors gave way to his love of the German philosopher Friedrich Nietzsche, and he developed a worldview with an overriding animosity toward the decadence of modernity. Influenced by mystical works and the occult, Evola began developing an idea of the individual’s ability to transcend his reality and “be unconditionally whatever one wants.”

Under the influence of René Guénon, a French metaphysicist and convert to Islam, Evola in 1934 published his most influential work, “The Revolt Against the Modern World,” which cast materialism as an eroding influence on ancient values.

It viewed humanism, the Renaissance, the Protestant Reformation and the French Revolution all as historical disasters that took man further away from a transcendental perennial truth.

Changing the system, Evola argued, was “not a question of contesting and polemicizing, but of blowing everything up.”

That made a fan out of Benito Mussolini.

The dictator already admired Evola’s early writings on race, which influenced the 1938 Racial Laws restricting the rights of Jews in Italy.

Mussolini so liked Evola’s 1941 book, “Synthesis on the Doctrine of Race,” which advocated a form of spiritual, and not merely biological, racism, that he invited Evola to meet him in September of that year.

Evola eventually broke with Mussolini and the Italian Fascists because he considered them overly tame and corrupted by compromise. Instead he preferred the Nazi SS officers, seeing in them something closer to a mythic ideal. They also shared his anti-Semitism.

Mr. Bannon suggested in his Vatican remarks that the Fascist movement had come out of Evola’s ideas.

As Mr. Bannon expounded on the intellectual motivations of the Russian president, Vladimir V. Putin, he mentioned “Julius Evola and different writers of the early 20th century who are really the supporters of what’s called the Traditionalist movement, which really eventually metastasized into Italian Fascism.”

The reality, historians say, is that Evola sought to “infiltrate and influence” the Fascists, as Mr. Sedgwick put it, as a powerful vehicle to spread his ideas.

In his Vatican talk, Mr. Bannon suggested that although Mr. Putin represented a “kleptocracy,” the Russian president understood the existential danger posed by “a potential new caliphate” and the importance of using nationalism to stand up for traditional institutions.

“We, the Judeo-Christian West,” Mr. Bannon added, “really have to look at what he’s talking about as far as Traditionalism goes — particularly the sense of where it supports the underpinnings of nationalism.”

An intellectual descendant of Evola, Mr. Dugin has called for a “genuine, true, radically revolutionary, and consistent fascist fascism” and advocated a geography-based theory of “Eurasianism” — which has provided a philosophical framework for Mr. Putin’s expansionism and meddling in Western European politics.

Mr. Dugin sees European Traditionalists as needing Russia, and Mr. Putin, to defend them from the onslaught of Western liberal democracy, individual liberty, and materialism — all Evolian bête noirs.

This appeal of traditional values on populist voters and against out-of-touch elites, the “Pan-European Union” and “centralized government in the United States,” as Mr. Bannon put it, was not lost on Mr. Trump’s ideological guru.

“A lot of people that are Traditionalists,” he said in his Vatican remarks, “are attracted to that.”