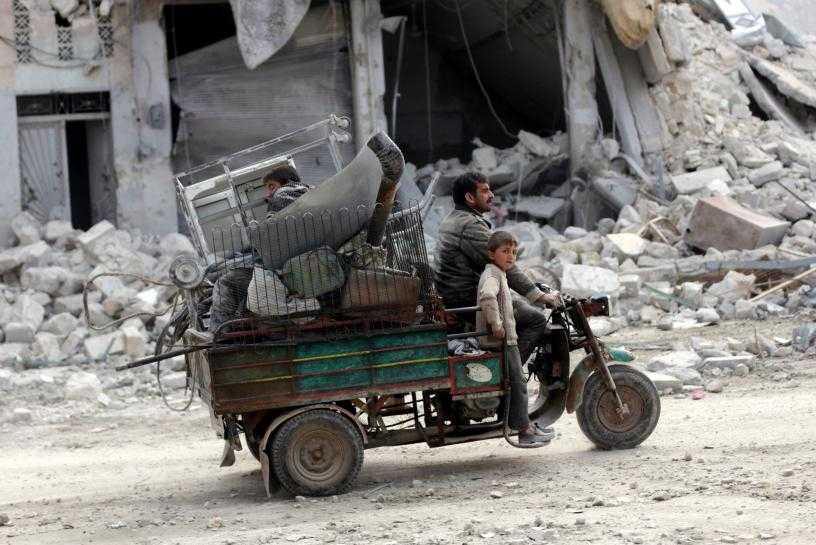 AMMAN The Syrian army has expanded its control over former Islamic State-held villages in northwest Syria, gaining more territory as it pushes back the jihadists from more pockets in Aleppo province, state media said on Saturday.

The army has made steady progress in recent weeks in eastern Aleppo countryside toward the Euphrates River where it now occupies more villages, state-owned Ikhbariyah quoted a military source as saying.

The army’s gains follow a push to the south and east of the city of al-Bab, which was captured by Turkey-backed rebels late last month.

Earlier, rebels said they had thwarted a large assault by the Syrian army and Iranian-backed rebels on their remaining strongholds in the western Aleppo countryside near Rashdeen.

By taking Islamic State territory south of al-Bab, the army is preventing any possible move by Turkey and the rebel groups it supports to expand southwards. It is also moving closer to regaining control of water supplies for Aleppo.

Islamic State’s holdings in northwest Syria have been whittled away over recent months by successive advances by three different, rival forces: Syrian Kurdish groups backed by the United States, the Turkey-backed rebels, and the army.

Islamic State’s loss of al-Bab after weeks of bitter street fighting marks the group’s effective departure from northwest Syria, once one of its most fearsome strongholds, and an area of importance because of its location on the Turkish border.

Steady advances since 2015 by the Syrian Democratic Forces -the Kurdish-led alliance of U.S.-led armed groups – had already pushed Islamic State from much of the frontier by the middle of last year and have since then threatened its stronghold in Raqqa.

Turkey’s entry into Syria’s civil war via the Euphrates Shield campaign in support of rebel groups fighting under the banner of the Free Syrian Army was intended both to push Islamic State from the border and to stop Kurdish expansion there.

Separately, clashes broke out for the fourth day between Turkey backed rebel force and the SDF forces west of Manbij which the rebels have vowed to recapture.

A group affiliated to the SDF said on Thursday it would hand over villages on a front line where it has been fighting Turkish-backed rebels to Syrian government control, under an agreement with Russia.

Turkish President Tayyip Erdogan said last Tuesday Manbij was the next target of the campaign following the capture of al-Bab from Islamic State.

The powerful Kurdish YPG militia, which is the backbone of the SDF, is viewed by Turkey as an extension of the Kurdistan Workers’ Party (PKK), a group that has waged a three-decade insurgency in Turkey.

The YPG helped capture Manbij from Islamic State last year in a U.S.-backed campaign fought under the SDF banner. The YPG has subsequently said it has withdrawn from Manbij. But Turkey continues to assert that the group remains in the city.

A U.S.-allied militia in northern Syria said on Thursday it would hand over villages on a front line where it has been fighting Turkish-backed rebels to Syrian government control, under an agreement with Russia.

No SDF official was immediately available to confirm if any villages had been handed over to the Syrian government.

In the eastern Hama countryside, jets believed to be Russian struck a livestock market in the Islamic state held town of Okeirbat, killing at least 10 people and injuring dozens, according to the Syrian Observatory for Human Rights and activists.

Russian jets also hit residential areas of the city of Al Dana in the province of Idlib with at least five civilians killed and a dozen people injured.