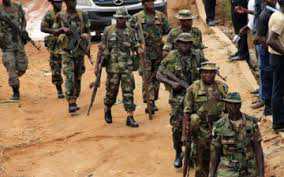 Scores of wounded Boko Haram insurgents captured by security forces in the ongoing military offensive in the North-East have asked troops to spare their lives, saying that their mission has ended.

The Defence Headquarters, DHQ, in a statement yesterday in Abuja signed by its Director of Defence Information, Major-General Chris Olukolade, said that the captured insurgents made the declarations in their confessions to interrogators.

He said the arrested members of the dreaded sect claimed that their clerics had directed them to disband their camps and escape and that the mission had ended.

Olukolade said that terrorists who had escaped from various camps stormed by security forces were captured in the fringes of Lake Chad.

According to him, “The captured terrorists, some of whom are fatally wounded, are already making useful statements to interrogators of the Multi-National Joint Task Force.

“In their confessions, it was revealed that some of the camps have been disbanded following the directive of their clerics who declared that the operation of the sect had come to an end as the mission could no longer be sustained.

“The terrorists, who are giving useful information as to the locations of their remnant forces, are full of apologies and pleas for their lives to be spared promising to cooperate.

“They confirmed that starvation was a major problem in addition to ceaseless bombardments on the camp locations even when they kept relocating.

“They also confirmed that several members of the group have been wounded and no treatment was forth coming.”

The DDI said troops had continued their assault on other locations across the states covered by the state of emergency.

He, however, warned members of the public who had been trooping to some dislodged camps and fringes of forests such as Sambisa and others to desist from doing so as operations were still ongoing.

Olukolade stressed that the general area still remained a theatre of war and movement remained restricted, as the environment had to be cleared for safety of citizens.

“The public will be informed when the locations are safe enough”, he said.

While the chairman escaped by a whisker, three policemen and two civilians in the convoy are still missing.

Jumba was said to have gone to his local government council to distribute relief materials to people affected by a recent attack by the insurgents.

He was attacked on his way back to Maiduguri, the state capital, on Monday about 4:30p.m. when suspected terrorists ambushed his convoy.

One of the survivors of the attack, one of the drivers (name withheld) attached to the Government House, told our correspondent that he was lucky to survive the attack.

He said the attackers, about 100, were armed with sophisticated weapons, adding that immediately they started hearing sounds of gunshots coming towards the convoy, many of them jumped out of their vehicles and took to their heels.

According to him, while some were lucky to escape, three policemen, two civilians and two vehicles were still missing.

The State Police Commissioner, Mr. Lawal Tanko, confirmed the incident. He said that he did not have any further details as the said policemen on the escort did not inform him that they would accompany the council boss to Gwoza.

“I have not been officially informed by those policemen that accompanied the caretaker chairman of Gwoza.

“Under normal circumstances, as the commissioner of police, any of my officers and men who will embark on any duty outside the state must come to my knowledge, but as I am talking to you now, nobody told me that some of my men will accompany any government official to Gwoza yesterday,” Tanko said.

Meanwhile, the Speaker of the House of Representatives, Hon. Aminu Tambuwal, yesterday said that the inability of the Federal Government to curb the menace of the Boko Haram sect was an indication that politicians had failed the country.

Tambuwal made the statement in an emotionalladen speech during a special session of the House on the killing of students and other Nigerians through terrorist actions. The session was tagged the “Day of mourning, one massacre too many.”

He said that government no longer had any excuse for its inability to protect defenseless children from violence.

He said: “Today is not a day for apportioning blames. It is a day for the expression of our sense of personal and national loss. It is also a day for us to look for concrete solutions.

“In my brief statement immediately after that attack, I warned that Nigeria is running out of excuses for our failure to live up to our responsibility to protect our citizens.

“Today, I wish to amend that comment and declare that we have run out of excuses. We no longer have any excuse for our inability to protect our innocent defenseless children from gratuitous violence.

“In recent times, it seems the nation wakes up every morning to the sad news of one gory tale of bloodletting and killing of innocent Nigerians or another in the North East states of Adamawa, Borno and Yobe, in the North Central states of Benue and Plateau and in other parts of Nigeria,” Tambuwal said.

The Speaker, who called for a one-minute silence top honour the victims, said the Federal Government must rise to the occasion.

“And by government, I do not mean only the executive. We in the legislature are also part of government. And we cannot, therefore, merely join in the chorus of lamentations. Our duty is to act swiftly and decisively in the protection of the citizenry,” he added.

Tambuwal said that the House had initiated and supported all measures needed to combat terrorism in the country.

“We have passed over 20 resolutions on the issue of national security. We amended the Anti-terrorism Act, 2011 to strengthen security agencies. We have appropriated huge sums of money for the security agencies.

“Only recently, January 30, 2014, the House in making its recommendations for constitutional amendment voted to include the national security agencies and the Nigerian Police on the first line charge for purpose of ensuring their financial independence and timely release of funds when appropriated.

“That is the most basic service citizens expect from their government.

“Let us not forget that we have in place a state of emergency in the three affected North East states. Yet, the killings have continued unabated in spite of the gallant efforts of our security forces.

“It is therefore clear that we need to come up with other ideas for a solution. There are certain questions that this House must now ask,” he added.

The Speaker said that at this stage of the country’s journey to nationhood, Nigerians should be highlighting the ties that bound them.

“In the light of a heartwrenching tragedy like this, our people must now see that those political, sectional and sectarian differences that have made it impossible for us to present a united front against our challenges are petty and self-absorbed.

“If a tragedy of the Buni Yadi magnitude does not bring us together as one nation, if the loss of our innocent children whose only offence was that they went to school to gain education and wisdom in preparation for a future of service to Nigeria and humanity does not unite us in grief, then we need to ask ourselves if we truly meet the basic spiritual requirements of nationhood,” Tambuwal said.

He, however, appealed to Nigerians to join in the struggle for the soul of the nation and “embrace as a sacred duty” the mission of restoring peace and stability in Nigeria.

“We must draw from the heartbreak of Buni Yadi and other areas affected by mindless violence, an inspiration to rededicate ourselves to the cause of nation building.

Also yesterday, the Federal Government said it will soon resuscitate and deploy air border patrol in the North East in order to curtail the activities of the rampaging Boko Haram insurgents.

Minister of Interior, Abba Moro, said this in Abuja at a meeting with the management of Dornier Aviation Services Limited, led by its Managing Director, Mr. Mark Snoxell Dornier.

According to the minister, the measures become necessary to take proper control of the country’s borders, especially in Borno, Yobe and Adamawa states where security challenges remain very high.

He explained that intelligence reports had revealed that most of those engaged in the ongoing killings were foreigners who came into the country through illegal entry points.

“This visit has been long in waiting, especially against the backdrop that I have paid a similar visit to your organisation almost immediately I assumed office as the minister of interior.

“I felt then and I still feel that air border surveillance is a very critical component of our overall desire to take proper control of our borders. As you are well aware, we have a serious internal security now; as you are equally aware, some of the perpetrators of mayhem in the country have been identified as foreigners who have illegally come in through our borders.

“You are equally aware especially that in the northern part our borders are very porous and so the three attributes that we try to develop to control our borders were vehicular border patrol, the construction of border plazas, the deployment of high technology equipment to be able to survey our borders and of course, the air patrol that we are talking about,” Moro said.

He said the government had taken some other steps to see how it could resuscitate air border patrol, adding that he had earlier set up a committee to examine Nigeria’s existing preparedness to undertake border patrol against the backdrop of its existing aircraft.

Dornier, who led the delegation, expressed the readiness of his company to partner the ministry by providing the necessary training for immigration personnel expected to take up the responsibility.

He told the minister that his company currently had two aircraft capable of delivering such service, stressing that the age of an aircraft had nothing to do with its efficiency so far as it was adequately maintained.

In a related development, there was tension in Abuja yesterday following reports of a bomb scare at the headquarters of the Nigerian National Petroleum Corporation, NNPC.

Located within the Central Business District, the NNPC Towers has often been viewed as a possible attraction to insurgents who had in the past struck landmark buildings like the Nigeria Force Headquarters and the United Nations Common Office.

Since then, security around the NNPC building has heightened with operatives barricading the whole place and even blocking one lane of the road.

However, there was an unusual presence of additional security personnel as well as heavy surveillance of the area following what a police source described as a “routine operation”.

Our correspondent, however, gathered that the operatives were acting on an intelligence report, which had indicated that Abuja could be the next target of attacks by the insurgents.

“The recent renewed attacks in Borno and Yobe states were thought to be an indication that the insurgents have been pushed backwards to certain parts of those states to the extent that they sometimes run into Cameroun.

“As much as this is true, they (insurgents) may want to spring a surprise attack elsewhere so that they can remain media-relevant. We are working on rounding up remnants of the sect in Niger and Kaduna states. If they will attack Abuja, those are the likely places from where the foot-soldiers would be recruited,” said a police officer who did not want to be named.

According to him, there was no bomb scare at the NNPC Towers, explaining that workers would have been evacuated in such situation.