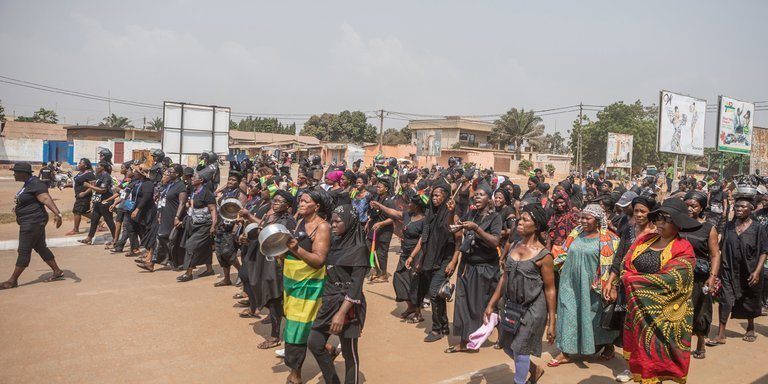 LOMÉ, Togo — The air-conditioner was broken in the sweltering neonatal ward of Togo’s largest hospital, and only one nurse was on duty to attend to the two dozen infants with life-threatening conditions.

Mothers with babies in the ward were imploring friends and family for loans to buy basic medical supplies from pharmacies around Lomé, the capital, because items like drugs, saline solution, latex gloves and packets of clean water were not available at Sylvanus Olympio University Teaching Hospital.

One infant, Tresor Tsolenyanou, was born in February with gastroschisis, a condition in which the intestines are partly exposed through a hole in the abdominal muscles. He shared a crib with several other babies, his bulging torso wrapped in gauze.

In the United States, the survival rate for gastroschisis is 90 percent. But because of the high risk of infection in this overcrowded, understaffed and undersupplied hospital, Tresor was likely to die, said Steven Kagni, the ward’s attending nurse.

Fed up with situations like Tresor’s, Togo’s public hospital workers are demonstrating their disgust with the level of care they are able to provide, adding their voices to a growing swell of political protests that have shaken this small, West African country.

As they have done half a dozen times since the beginning of the year, doctors and nurses again went on strike in late March, walking out of the central hospital, blocking new patients from entering and encouraging existing patients to seek private treatment elsewhere.

“When you accept to work in these conditions, you might be complicit in a situation that could cause death. You are responsible,” said Dr. David Dosseh, a surgeon at the central hospital who helped organize the strikes. “So at a certain moment, you have to ask if it’s better to just stop working.”

Critics say the pervasive problems in Togo’s medical system — where equipment frequently malfunctions, electricity and water supplies are unreliable and new doctors earn less than taxi drivers — are the result of government corruption and ineptitude.

But the current unrest in Togo extends far beyond the nation’s troubled health care system.

Dr. Dosseh and his colleagues said their frustrations with the government were aligned with those of university students, public schoolteachers, and others who have led a recent wave of protests against President Faure Gnassingbé, whose family has ruled Togo for 50 years.

While doctors have kept clear of street demonstrations and confined their opposition to strikes, their status as medical professionals, and their intimate involvement with the daily miseries of life in the capital, has put them at the forefront of the movement calling for Mr. Gnassingbé to be removed from power.

“People have a lot of respect and consideration for the doctors,” said Farida Nabourema, a prominent opposition activist. “The strikes are a key part of the resistance.”

Mr. Gnassingbé, who succeeded his father as president in 2005 in an election marred by violence and accusations of fraud, supported legislation introduced last fall that would put in place presidential term limits — but which exempted his current and previous terms, allowing him to run again in 2020 and 2025.

That bill was angrily voted down by opposition lawmakers and led to demonstrations around the country.

Protesters’ frustrations were also stoked by a dismal economy, crumbling schools and expectations raised by the ouster of other longstanding African leaders like President Yahya Jammeh; Gambia’s ex-president, who was voted out of office in 2016; and Robert Mugabe, who resigned in November after 37 years as president of Zimbabwe.

Mr. Gnassingbé’s government countered with sweeping arrests of opposition politicians, internet blackouts, crackdowns on social media and, according to Amnesty International, beatings and torture by the federal police.

In February, the government agreed to negotiate with opposition party members, a meeting brokered by President Nana Akufo-Addo of Ghana. Since then, large-scale political protests have waned, with activists awaiting the outcome of the discussions.

But the health care workers continue to forge ahead with strikes, regularly leaving the central hospital with few or no staff members for days at a time.

I. Glenn Cohen, a professor at Harvard Law School and an expert on health law and bioethics, said medical ethicists generally agree that the potential benefits of a doctors’ strike can justifiably outweigh the potential risk to patients, if the dispute is about the quality of patient care (as opposed to, for example, pensions or vacation time). A recent peer-reviewed study of doctor’s strikes around the world found no evidence that they lead to an increase in patient mortality, he said.

“When you agree to become a doctor, you do not agree to work under any possible condition with whatever quality of care that might mean for patients,” Professor Cohen said.

The government in Togo has retaliated against some leading doctors. Two weeks ago, Ihou Majesté, the vice dean at the University of Lomé medical school, was arrested and detained by the federal police for several days after an audio clip, said to be in his voice, circulated comparing the health ministry to a broken down car.

Experts at the United Nations say that Togo scores about average for a country of its income on metrics like vaccine availability, deaths from noncommunicable diseases and average life expectancy. Its newborn mortality rate, 26 per 1,000 births, is better than war-torn Sierra Leone, but worse than countries like Niger and Burkina Faso that are less developed than Togo.

Moustafa Mijiyawa, the health minister, did not respond to email inquiries asking for an interview. Reached on his cellphone, he hung up without commenting.

Doctors here point to their own statistics: only four doctors per 10,000 residents of Lomé, when the international standard calls for 20; five often broken CT scanners for a city of 837,000; one nurse for every 13 beds at the central hospital, when experts recommend a ratio of one to four.

The government spends $16 per capita on primary health care, among the lowest in the world, according to research backed by the Gates Foundation.

A French-trained neurosurgeon at the central hospital said he recently had to perform brain surgery on a motorcycle accident victim with no electricity, using his cellphone for light. By the time the power returned, the man was in a coma and has yet to regain consciousness.

The central hospital is known around Lomé as “the Morgue,” as locals say you’re more likely to come out dead than alive. Patients are routinely forced to pay out of pocket for basic supplies, even in emergency situations, before they can receive treatment.

“In the emergency room, if you don’t pay, you die,” said Dr. Atchi Walla, a surgeon there.

Medical ethicists, in part, judge the permissibility of a health care strike on the probable outcome, said Professor Cohen. If the strikes are unlikely to lead to improvements, they may not be worth the risk to patients.

And so far, the strikers in Togo do not have much to show for their efforts in terms of government action. But the doctors and nurses have not indicated they plan to stop, and that is fine with some of their supporters.

Ms. Nabourema, the opposition activist, said her father, who has high blood pressure, was among those discharged prematurely from the hospital in March because of the strikes.

Still, she said, the strikes “are the right thing to do,” even if they are more likely to incite the government to escalate its reprisals than extract concessions.

“There’s no other way for them to ask for anything,” she said.