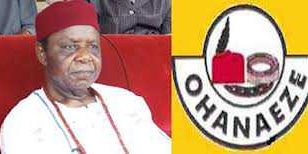 Umbrella Igbo socio-cultural organisation Ohanaeze Ndigbo has insisted on equal representation of the six geo-political zones in the composition of the national dialogue.

Ohanaeze, which presented its memorandum to the National Dialogue Advisory Committee also recommended a chairman and six vice chairmen, one from each geo-political zone for the conference. It said all issues should be discussed at plenary and followed by discussions, questions and answers.

President General of the organisation, Chief Gary Enwo-Igariwey, who was accompanied by prominent Igbo leaders, said he was speaking for all Igbo speaking people, no matter their geographical origin.

“We propose 60 delegates from each zone, and since this conference is essentially about ethnic nationalities, it is expected that each zone should bring ethnic nationalities in their zone, and special interest groups, such as women, labour union, youths, religious groups and the disabled. Political parties should not play any role in the selection of the delegates.”

The Igbo organisation believes that the methodology of selecting delegates should be done by each zone based on its natural diversities and composition.

It suggested that the Conference should not exceed the tenure of the present administration.

Ohanaeze also recommended that the outcome of the Conference be subjected to a national referendum/plebiscite and adopted thereafter as the Constitution.

Also to be tabled are Judicature, Population and census issues, religion and secularism and the place of traditional rulers and institutions, among others.

Other organisations, such as Southeast Elders Council and Southeast Council of Traditional Rulers adopted the Ohanaeze memorandum.