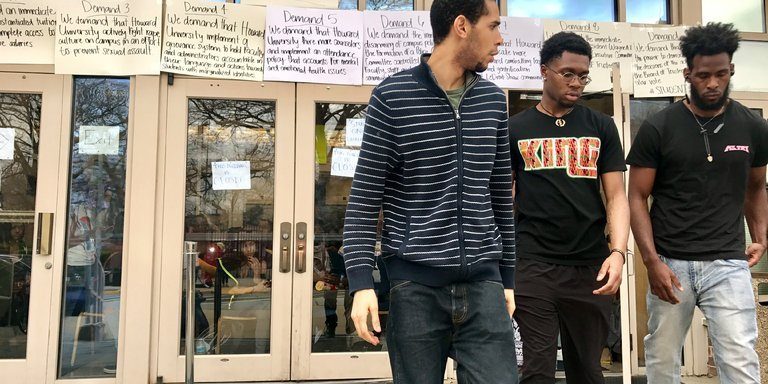 Hundreds of Howard University students occupied the main administration building for a second day on Friday, crippling operations amid a protest fueled by revelations about the misappropriation of financial aid money.

“We’ll be here as long as it takes to get our demands met,” Juan Demëtrixx, a Howard University student, said on Friday at a morning news conference held by HU Resist, the student group that organized the protest at the historically black university in Washington. “We’ve taken over every floor.”

Members of HU Resist, disgruntled by what they called “administrative negligence,” had already been planning an event to bolster a list of nine demands that they issued on Sunday.

The group called for Howard to provide adequate housing to younger students, to disarm campus police officers and to actively fight rape culture on campus. It made several other demands, including the immediate resignations of the university’s president, Wayne A.I. Frederick, and the executive committee of the board of trustees.

HU Resist’s plan quickly swelled into a multiday protest after Dr. Frederick confirmed on Wednesday the mishandling of funds and, in turn, the firings of six employees.

The protest and sit-in in the university’s administration building began Thursday morning and quickly grew. At one point a large group of protesters belted out the Rihanna song “Bitch Better Have My Money.”

Maya McCollum, a 19-year-old freshman who helped organize the sit-in, said on Friday that the news of the misappropriated financial aid money was “the straw that broke the camel’s back.”

On Friday, Dr. Frederick issued a statement addressing HU Resist’s demands. “Howard University has birthed generations of student activists and we will always continue in that spirit,” Dr. Frederick said.

The statement included a list of HU Resist’s demands and information on efforts he said the university had made or has planned for each item — though he did not address the call for his resignation.

He ended by saying: “Your concerns are valid. We are listening. We are committed to jointly making changes to move Howard forward.”

Protesters did not appear moved by his response. At the administration building on Friday afternoon, where a list of the demands were scrawled on large pieces of paper and hung above a main entrance, dozens of students were gathered in the foyer, chanting, “Whose school? Our school!” They had been there since Thursday afternoon, Ms. McCollum said.

Inside, empty Dunkin’ Donuts boxes and Red Bull cans were scattered across the floor.

Rows of chairs blocked the entrance, and the glass doors were marked with handwritten signs: “STUDENTS ONLY. (ID REQUIRED.)”

“The staff work for us, not the other way around,” said Zephaniah Galloway, 19, a freshman from Cleveland and a member of HU Resist.

Outside the building, members of the board of trustees lingered, waiting for an afternoon meeting scheduled with protesters. Eugene Newman, a board member known as Rock, declined to comment on the financial aid scandal but gave a full-bodied high-five to a student protester who came out to welcome him.

The meeting did not appease HU Resist. The group said on Friday evening that the board had not taken its demands seriously — or even fully read them — and that it would continue to occupy the building, where it was controlling all entrances and exits.

The statement released on Wednesday by the university’s president did not disclose how much money was potentially embezzled by members of the financial aid office. But it said six employees had been fired “for gross misconduct and neglect of duties.” Dr. Frederick added, “We will refer this matter for criminal prosecution, as appropriate.”

In a statement on Friday afternoon, the board of trustees said it stood with Dr. Frederick on the handling of the financial aid matter and on his response to HU Resist’s demands.

In December 2016, Dr. Frederick and the board of trustees became aware that financial aid funds may have been mishandled, quickly prompting an internal investigation, Dr. Frederick said. The university hired an outside auditor to investigate. Those results, which were reported to the president in May 2017, confirmed that misappropriation of funds had occurred from 2007 to 2016.

Dr. Frederick said he reported the matter to the United States Department of Education in July 2017. Howard’s investigation concluded in September, and the six employees were fired.

In a letter to students on Wednesday, Dr. Frederick said: “I feel strongly that any dollar that is taken away from a deserving student due to malfeasance or fraud is unacceptable. We will continue to take swift action against any individuals involved in this wrongdoing.”