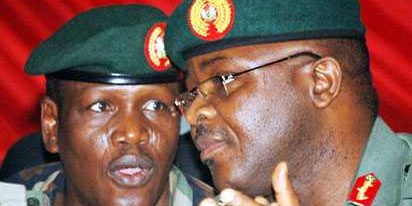 The Chief of Army Staff Lt General Azubike Ihejirika, has advised Nigerians not to panic over speculation of the spread of terrorists into other regions of the country, assuring that security moves were in top gear to monitor terrorists movements just as the Director of Army Public Relations, Brigadier General Ibrahim Attahiru also alerted Nigerians that Boko Haram terrorists have come out with new tactics to circumvent security measures put in place towards curtailing their activities in the North East.

The new methods according to General Attahiru include resorting to attacks on soft targets and erecting snap road blocks on major highways in the north east.

He however stressed that the Army has been responding swiftly through effective combat patrols both on air and land.
General Attahiru said: “While the onslaught on the violence extremist organisation continues, the insurgents have devised methods

to circumvent the new security measures by resorting to attacks on soft targets and erecting snap road blocks on major highways in the north east” he said.

“Equally, our troops have responded appropriately through effective combat patrols both on land and air in order to dominate the area of operations,” he stated.

Describing the United States’ designation of Boko Haram and Ansaru as Foreign Terrorist Organisations (FTO) as a step in the right direction, he noted that the Nigerian Army has continued to carry out “full spectrum counter-insurgency operations, with emphasis on both kinetic and non-kinetic operations to shape the operational environment in the north east”.

“Currently, 7 Division of the Nigerian Army in conjunction with the Nigerian Air force had carried out simultaneous offensive operations. Based on these operations, insurgents were successfully cleared from some camps in SambisaForest, BitaVillage in Damboa Local Government as well as Gujba in neighbouring YobeState. Many insurgents were killed and large cache of arms and ammunition were also recovered,” the Army spokesman said.

In the same vein, the General Officer Commanding, GOC, 2 Division Garrison, Major General Ahmed Jubrin expressed the readiness of the Nigerian Army to combat terrorism and other security challenges in the country.

Addressing the soldiers, General Jubrin who was represented by the Commander, 4 Brigade, Benin, Brig.-Gen. Patrick Akem, said at the end of the 2 Brigade “Inter Brigade Combat Proficiency Competition,” which ended in Benin City, yesterday, said that the exercise was geared towards combat readiness, as much as confidence building for men of the Nigerian Army.

Chief of Army Staff in Lagos

Speaking in Lagos while commissioning the remodeled headquarters of the Nigerian Army Engineers Complex, at Bonny cantonment , Victoria Island, Ihejirika noted that attempt by some insurgents to

spread from the North eastern region of the country to other regions have met brick-wall following their subsequent arrests, adding that the Nigerian Army would continue to do its best in providing equipment and logistics to enable troops carry out their duties”.

He said, “The spread should not cause panic. We monitor their movement and the exposure on them is beefed up in the North East in particular and in other parts of the North and the tendency is not for them to fret down wards.”

What we are trying to do is to build new cells in the new areas particularly for those of them that are unrepentant.a

We have a common understanding with the SSS ,the police and other sister services to continue to monitor them and they are being arrested”.

Commending the Nigerian Army Corps of Engineers for turning giving its head quarters a structural face lift, Ihejirika noted that the initiative and courage to undertake such project was in line with his vision to transform the Nigerian Army into a force that would meet the demands of the present challenges as well as remain relevant in national development.

According to him, â€œ this giant strides entailed a lot of sacrifice, integrity and on the part of the commander and his officers and soldiers. It is a proof that the transformation agenda of the president, commander- in chief of Armed Forces, Dr Goodluck Jonathan is being imbibed by some commanders in the Nigeria Army.”

He therefore,urged other commanders to emulate such,even as he encouraged the Commander, officers and soldiers of the Corps to strive more to improve upon the standards attained, noting that any organisation that is not growing is dying. here is still room for improvement particularly in support for the Nigeria Army operations in the North East where we have made progress the Army Headquarters in the face of limited resources and other competing needs.