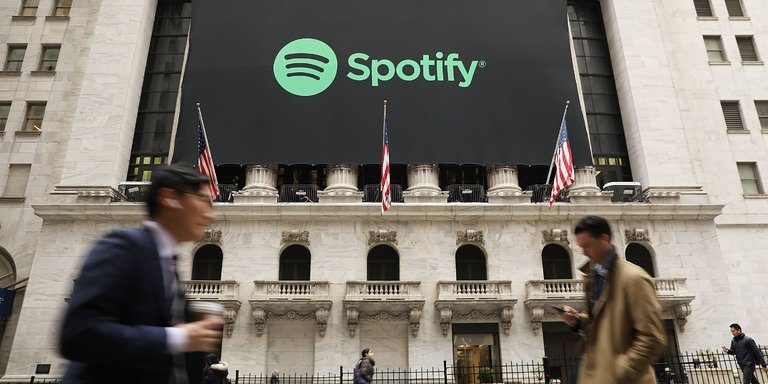 Spotify is a hit.

On its first day of trading on the New York Stock Exchange, the music streaming service finished with a valuation of $26.5 billion. The share price closed at $149.01, giving Spotify a market value similar to that of companies like M&T Bank and General Mills.

For the music business, Spotify’s listing on the Big Board symbolized the ascent of streaming as the new dominant format. It also represented some rare good news for an industry deeply affected by technological change. Buoyed by subscriptions from services like Spotify and Apple Music, record labels have begun to have significant revenue growth for the first time in nearly two decades, drawing attention from investors.

The stock opened trading at $165.90, meaning that Spotify was valued at $29.5 billion to start the day, before declining gradually through the afternoon.

Among Wall Street traders, Spotify’s debut as a public company drew attention for the way it decided to sell its stock. It went with a so-called direct listing approach, a rare process that eschewed the usual circus — and safeguards — of a standard initial public offering.

Typically, a company lists its shares publicly as part of a broader plan to raise fresh cash for acquisitions or other investments. Spotify chose not to raise any new funds by issuing shares, which would have diluted the value of existing stakes owned by shareholders.

Instead, the company is taking existing shares and allowing them to be traded on the exchange. That allows longtime shareholders — like investors and employees — to sell their shares on the exchange immediately, though for years an active secondary market has existed for Spotify stock.

The Stockholm-based company, which was founded in 2006 and went online in 2008, said it did not need to raise any new cash from investors, citing the roughly $1.84 billion it had on hand at the end of 2017.

Daniel Ek, the company’s chief executive and co-founder, characterized Spotify’s manner of going public as perfectly in keeping with the company’s self-image as a disrupter.

“While I appreciate that this path makes sense for most, Spotify has never been a normal kind of company.”

Indeed, Mr. Ek gave no interviews on the trading floor (although he did appear on “CBS This Morning”).

Spotify’s direct listing approach was still seen as risky. Without underwriting banks acting as “stabilizing agents,” and without millions of newly issued shares to guarantee liquidity, the process for setting an opening price proved slow and complex. The stock did not begin trading until 12:43 p.m., the latest start for any company ever listed on the New York Stock Exchange, according to Kristen Kaus, a spokeswoman for the exchange.

Before the slow start, in a botched attempt at hospitality, the New York Stock Exchange welcomed the Swedish company to the trading floor by flying the red and white flag of Switzerland outside its headquarters in Lower Manhattan. The error was quickly corrected, with a blue and yellow Swedish flag taking the place of the Swiss banner — but not before Scandinavian Twitter had captured the mix-up.

Afterward, the day went without a glitch, with Spotify achieving a trading volume of 30 million.

“It was a safe landing,” said Santosh Rao, the head of research at Manhattan Venture Partners. “People thought this was going to be chaotic, but it was smooth.”

Spotify’s arrival on the market followed the Wall Street debut of Dropbox last month, when the cloud storage company’s shares jumped 36 percent on its first day of trading. Dropbox closed Tuesday at $31.59, far above its I.P.O. price of $21 a share.

Taken together, the new offerings amount to a bright spot for a technology sector that has been badly beaten up by investors this year. Amid growing concern over trade tensions with China and possible regulatory scrutiny of Facebook, technology shares shed roughly $450 billion in market capitalization between March 12, the peak of the Standard & Poor’s 500 tech sector, and Monday.